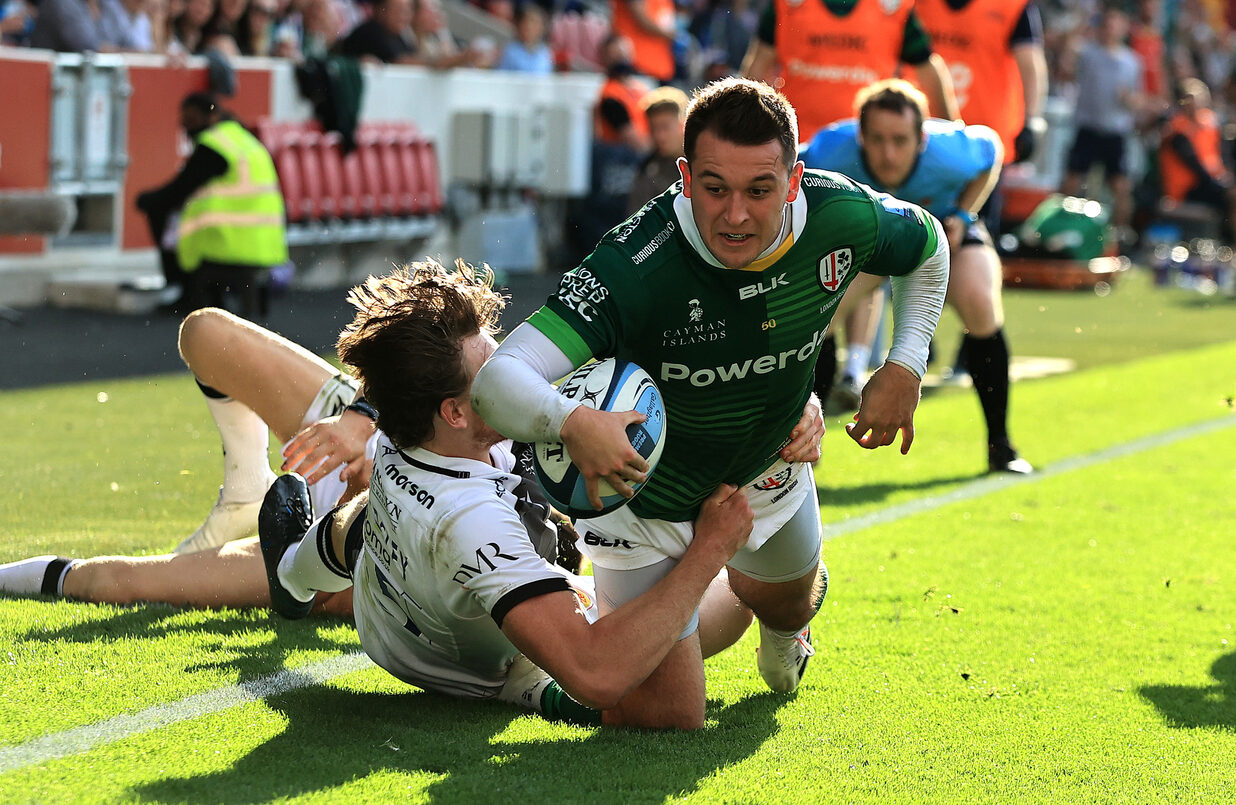 In the end, the width of a post was all that denied London Irish a quite remarkable victory at the Brentford Community Stadium on Sunday afternoon.

Trailing 31-14 at the break, the Exiles produced an incredible second half display to draw level with Sale Sharks with moments to go.

And then, from 57-metres, Paddy Jackson’s last-gasp penalty struck a post, denying the Exiles what would surely have been one of the greatest rugby comebacks of all-time.

Earlier, on a glorious September afternoon in the capital, Irish were dealt a significant early blow, when Sale opened the scoring inside the opening two minutes.

After a strong burst in midfield from Manu Tuilagi, AJ McGinty was in the right place at the right time to go over under the posts.

The Sharks number 10 added a straightforward conversion from close-range, to make it 0-7 early on.

It was fair to say Irish were up against it in the opening exchanges – and it went from bad to worse on the quarter hour, when former Exile Marland Yarde cut in from the left flank and bustled his way over to score, with McGinty again adding the extras.

Undeterred, Irish responded within a couple of minutes with a score of their own.

Quick-thinking from Ben White from a penalty five metres out saw him dart over for his first try in London Irish colours, with Paddy Jackson converting from under the posts.

The respite was short-lived, however, as Sale scored again on 22 minutes – a sublime McGinty grubber kick was seized upon by Sam James, who crossed the whitewash. McGinty made it 7-21 with a simple right-footed conversion.

The Sharks extended their advantage to 17 points on the half-hour mark, with McGinty slotting over a penalty.

It was a topsy-turvy encounter to say the least – and the tries kept on coming before the break.

Irish scored next – courtesy of Agustin Creevy. The Argentine started off the break, and when White was held-up just short, the Exiles’ hooker powered over the line for the hosts, with Jackson adding two more.

Soon after, though, Irish were reduced to 14 men. Adam Coleman was adjudged to have committed a high tackle after a lengthy TMO intervention.

Sale made their numerical advantage count instantly – Will Cliff spotting a gap down the blind-side to coast over unopposed.

McGinty’s fine kick from out wide completed the first half scoring.

Irish were still down to 14 for the opening few minutes of the second half, but as soon as they were back to their full complement, they scored.

After a fine break, Tom Parton did brilliantly well to bustle his way over in the corner for a trademark try – with Jackson’s conversion from touch hitting the post and falling agonisingly wide.

Irish were enjoying a fine spell, with the introduction of a number of players from the bench breathing fresh life into Kidney’s side.

Sale were second-best by now and the visitors were reduced to 14 men when Jono Ross was penalised for an off-the-ball challenge.

With a one-man advantage, Irish scored a fourth try on 67 minutes – a free-flowing backs move resulted in Parton sprinting over for his second try of the afternoon, to make it a seven-point ball game with over 12 minutes remaining.

Unbelievably, Irish scored again with three minutes to play! Curtis Rona this time going over in the corner for another superb try. Jackson, from touch, made no mistake – and the scores were level!

And then, in the final play of the match, from fully 57 metres, Irish had a chance to win it, when Jackson stepped up for a penalty.

The ball seemed destined to go over, but it struck a post – and that was that.