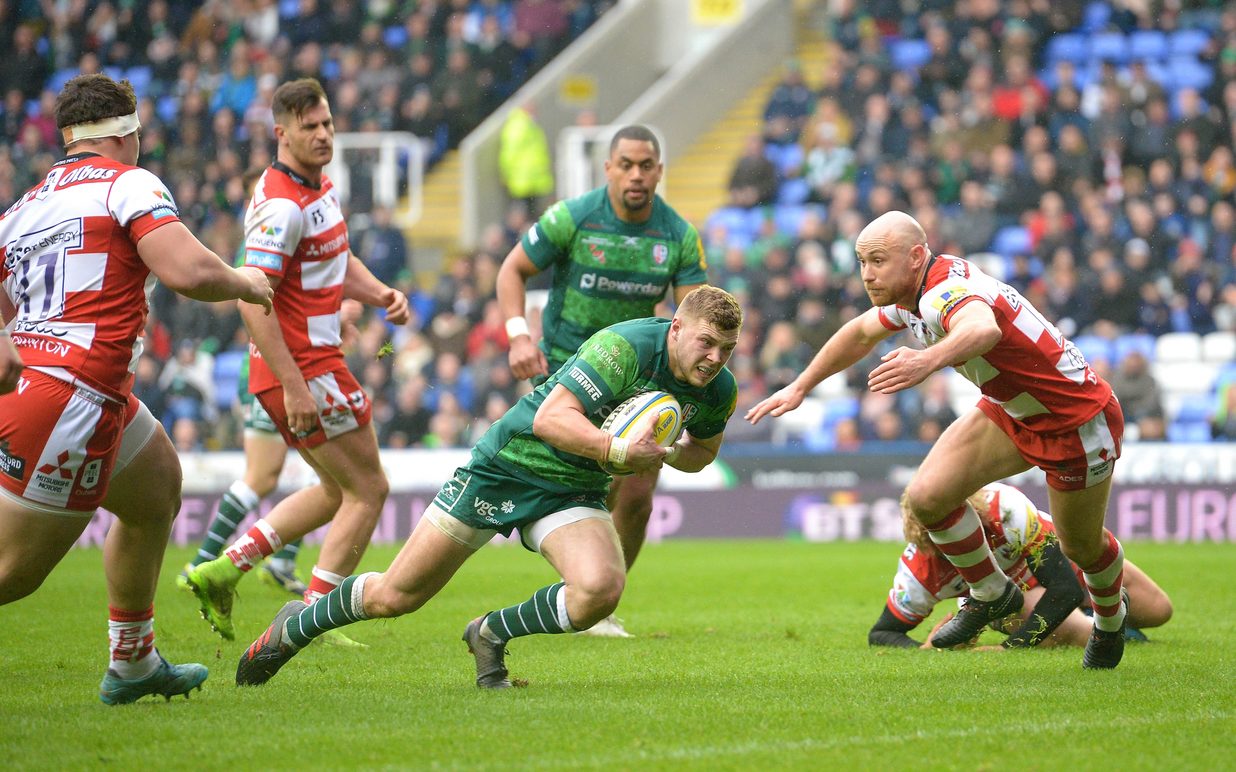 London Irish’s St Patrick’s Party fixture had all the ingredients of a classic, the Exiles eventually beaten 33-29 by top four hopefuls Gloucester in front of more than 15,000 spectators at the Madejski Stadium.

Declan Kidney’s first game in charge began in emphatic fashion, Irish going 17-0 up inside the first 20 minutes thanks to tries from Josh McNally and Piet van Zyl as well as a penalty from James Marshall.

However, the Cherry & Whites scored three tries in 10 minutes to turn the contest upside down and lead 19-17 at the break. The visitors crossed for two further tries with the hour mark looming and despite Irish replying with two scores of their own through Theo Brophy Clews and Joe Cokanasiga, Gloucester held on for the win.

Irish gained the initiative as early as the fifth minute, Marshall slotting home a penalty after a period of sustained pressure immediately from kick-off. On the front foot with an attacking platform from the restart, the hosts crossed for their first try of the game on 11 minutes courtesy of the returning McNally. The former London Welsh second-row was playing his first game for the club since having corrective heart surgery, and his no nonsense ball carry was enough to get himself over the line. Marshall added the extras for a 10-0 lead.

Kidney’s men went over for their second try seven minutes later, van Zyl’s show and go bamboozling Gloucester’s defensive line to yield further points for Irish. Again, Marshall kicked the conversion to put his side 17-0 up. Irish went within a whisker of registering their third score of the game on 24 minutes only to fumble the ball forward with the try line beckoning.

On 27 minutes the West Countrymen scored the first of their three tries before half-time, James Hanson crashing over from close range before Tom Marshall and Lewis Ludlow touched down for a quick-fire double.

Five minutes into the second period, Gloucester had a try chalked off by the TMO, the Kingsholm outfit penalised for obstruction. The Exiles faithful were soon in full voice once more when van Zyl punctured a hole in Gloucester’s rearguard to race into their 22 only to be halted by series of defenders.

After Gloucester had another try disallowed for forward pass, the Cherry & Whites went over for a legal score on 56 minutes through Mark Atkinson who fended off two would-be tacklers to cross under the posts. Tom Marshall, brother of Irish’s James then squeezed in at the corner three minutes later with Billy Burns converting both scores to increase his side’s lead to 33-17.

Despite the margin, the Exiles demonstrated tremendous character to claw themselves back to within four points of Gloucester going into the last three minutes. Brophy Clews crawled his way over the line folling a neat offload from Cokanasiga on 65 minutes, before the latter bagged a try of his own with a barnstorming carry on the far side.

Trailing by just four points, Irish looked to snatch victory but a resolute Gloucester outfit held on for the win. Irish have closed the gap on Worcester Warriors to 10 points at the foot of the table, and with four rounds of the Aviva Premiership remaining, anything is possible.