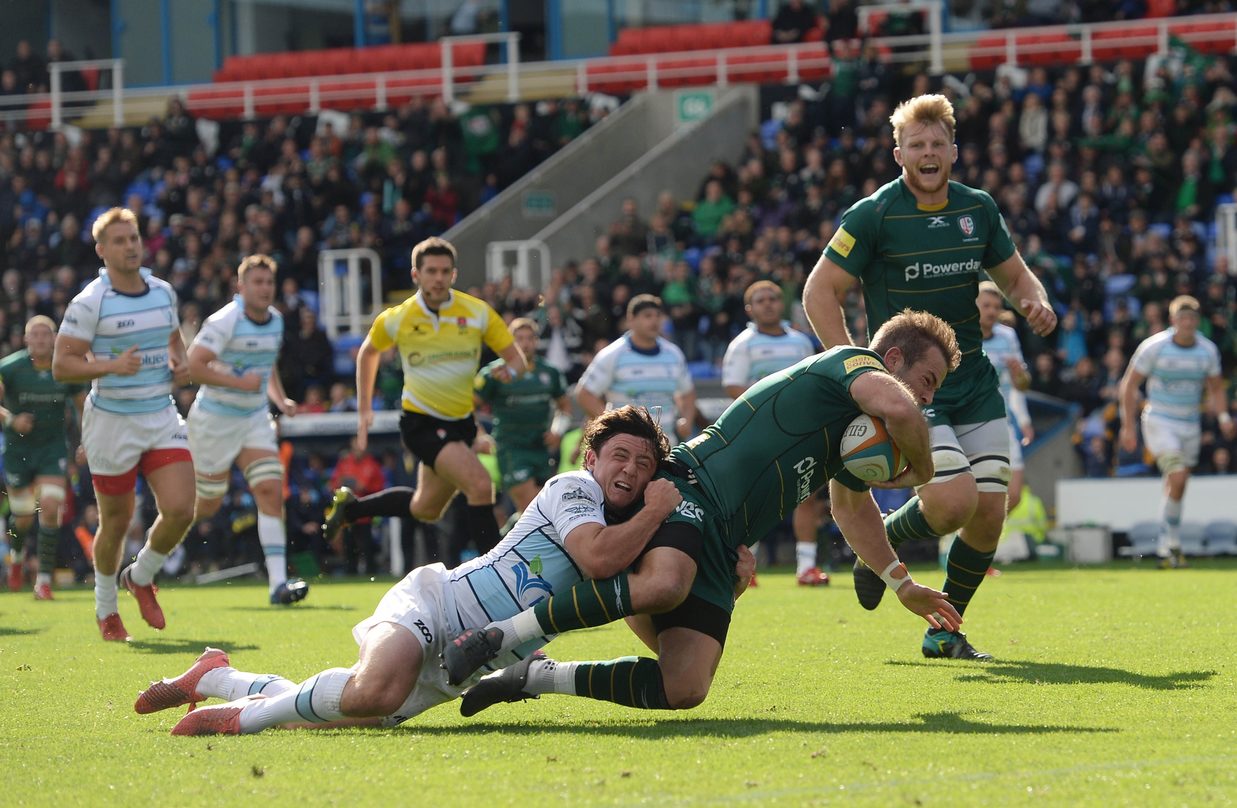 London Irish continued their winning start to the season, the Exiles securing a 29-20 bonus-point victory over Bedford Blues to make it three wins out of three in the Greene King IPA Championship.

A brace from man-of-the-match Tom Parton as well as further scores from Stephen Myler, Dave  Porecki  and Tom Stephenson were enough for an Irish triumph despite a late Bedford fight-back.

Irish were reduced to 13 men in the closing stages, Harry  Elrington  shown a yellow card for an altercation at the scrum, before TJ Ioane saw red for a high tackle. This made for a tense finish, but Declan Kidney’s men underlined their character to see out the remainder of the contest when their backs were against the wall.

Irish opened the scoring on 17 minutes, Exiles academy graduate Parton latching onto Myler’s kick through to touchdown in the corner. Parton, who was in  scintillating  form throughout the afternoon, was the catalyst for the score as he sprinted half the length of the field to set up an attack. Three phases later he was over for the try.

Myler turned from provider to try scorer to double Irish’s tally of tries five minutes later as he punctured his way through the Blues’ defensive line following Teofilo Paulo’s excellent ball steal at the lineout. Myler converted his own score to give Irish the advantage at 12-0.

With the half hour mark looming, England age group international Parton chalked up his second try of the day when he demonstrated outrageous footwork to bamboozle his opposite number to squeeze in at the corner. Myler’s conversion made it 19-0.

On 33 minutes Bedford got their reward for a period of sustained pressure  by virtue of  Alex Rae, who  dotted down from a dominant rolling maul. The visitors were dealt a blow just three minutes into the second period when Camilo Parilli-Ocampo was stretchered off with what appeared to be a leg injury. When play resumed Bedford went on the attack and put pressure on Irish’s rearguard with a series of explosive carries. Irish stood  firm but  conceded a penalty close to their own line, which Ed Coulson duly obliged with to cut the gap to 19-8.

Irish secured the try-bonus point on 49 minutes,  Porecki  crossing the line from the back of a rolling maul before Stephenson added further gloss to the score line just short of the hour mark. Stephenson gobbled up a miscued clearance kick on Bedford’s 22 to sprint in at the corner, despite the best efforts of a scrambling Blues defence.

Sandwiched in between the two scores was a yellow card shown to Matt Rogerson, the back-row dismissed for a professional foul as Bedford eyed a quick tap penalty. 10 minutes from time Bedford’s  Jarad Williams slid over from close-range after he showed intelligence to scoop the ball up from the base of the ruck to score. With the hosts down to 13 men in the dying embers of the contest, Bedford threw everything at Irish’s try line and they got their reward courtesy of an Oli Curry try. However, the day belonged to Irish, who now gear-up for next weekend’s trip to Coventry.