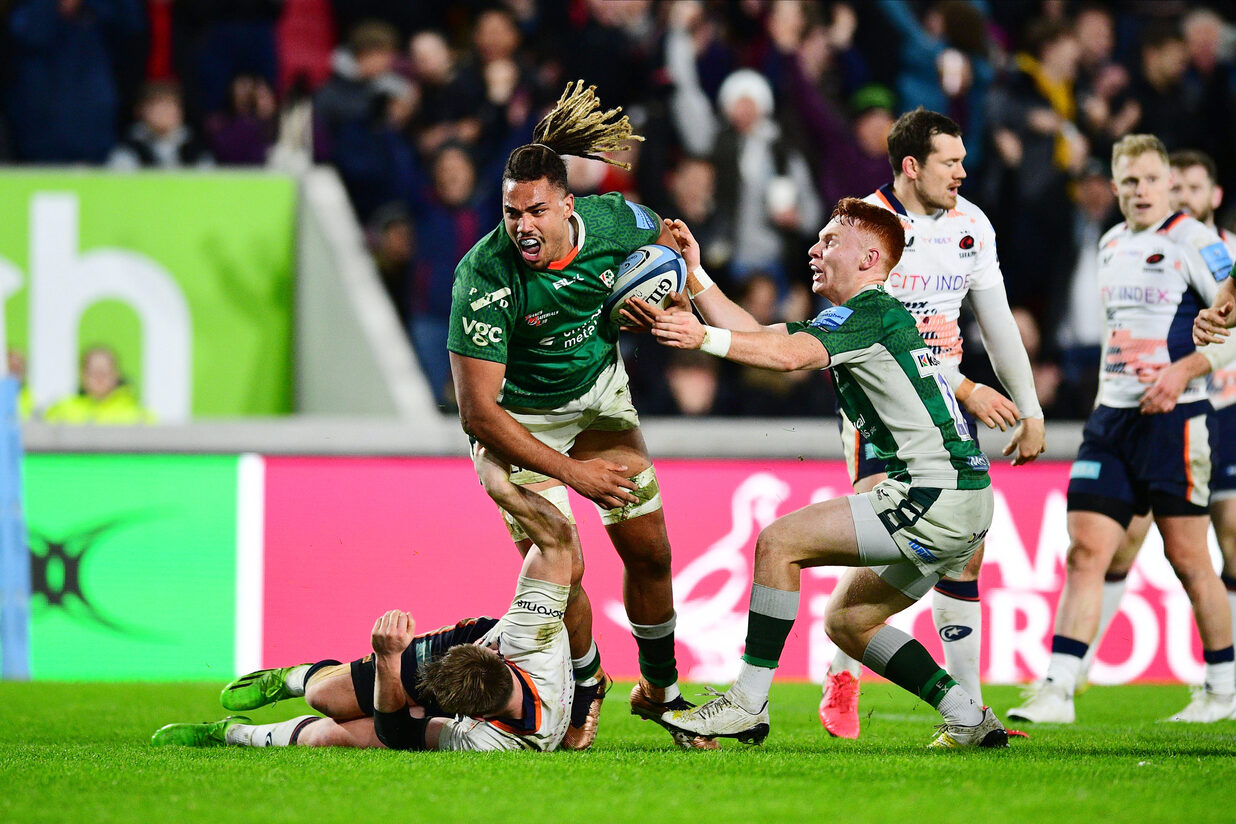 Christmas arrived early in Brentford for London Irish, recording a famous win over capital rivals Saracens in Round 13 of the Gallagher Premiership, winning 29-20 at the Gtech Community Stadium.

Ollie Hassell-Collins’ opening score from close range set the tone for his side, but an easy ride it was not for London Irish as cards from both sides would tip the balance throughout.

Irish went in at the break 19-10 to the good, Paddy Jackson’s boot guiding the Irish ascent that was shortly reduced by Saracens replacement Kapeli Pifeleti.

Sean Maitland would score once more for Saracens, but Irish would secure the result magnificently through more Jackson penalties and a late Chandler Cunningham-South score to end Saracens’ run of nine straight wins in the Premiership.

Irish made a positive start, Ben Loader chipping through for Ollie Hassell-Collins but Alex Goode would cover the ball but go into touch.

Possession from the lineout in great field position would benefit the Exiles, working through the phases and with a switch initiated by Paddy Jackson from right to left, Irish looked promising.

Benhard Janse van Rensburg located Ollie Hassell-Collins, who touched down under traffic from the visiting defence with less than five minutes on the board to go top of the Premiership try-scoring charts with his ninth try, Jackson adding the touchline extras.

An excellent steal from Tom Pearson showed Irish were switched on in defence, Ben White putting in a visionary 50:22 attempt that was recovered by former Exile Sean Maitland, and despite the pleas of the team and Exile Nation, what looked to be a stray foot in touch was not awarded by the officials.

The Exiles were required to match Saracens effort now without the ball, and did so with excellent defence on their try line, repelling the north Londoners and forcing an error on Billy Vunipola.

For not rolling away Irish was penalised, and Owen Farrell stepped up to split the uprights and reduce arrears for his side to four points.

Things would get more complicated for the home side, Adam Coleman dismissed with a red card for leading with a shoulder to the head in a tackle on Tom Woolstencroft, Rob Simmons then replacing So’otala Fa’aso’o.

An immediate impact from Simmons saw the leading lineout stealer in the division execute another aerial pilfer, and Irish were soon to be going the other way up the park.

A flowing attacking move, with one-handed passes out the back from Simmons and Jackson, saw Irish advance and once the ball reached the breakdown, Saracens didn’t roll away and Jackson added another three on the scoreboard.

Ill-discipline from Saracens saw them concede a knock-on after more attacking initiative from the Boys in Green, consequently winning a penalty at the following put-in and affording another three points for Jackson to take.

An overcooked lineout from Sarries put more pressure on themselves, another smart 50:22 effort from White, although not completed, saw the visitors go for touch and concede possession and territory.

In the loose, Pearson’s charge forward was met illegally by opposite number Ben Earl, the latter of whom met the Academy graduate with his shoulder and was red carded - Jackson then added three more to his tally.

Another contest in the air from Simmons won back the ball for his side, but Saracens would put the pressure on with the clock in the red.

After a catch and drive effort went stagnant, the ball was to be worked through hands around the fringes, replacement Kapeli Pifeleti touching down and Farrell converting.

A fracas in the aftermath of the score meant Irish were awarded a penalty from halfway, the Irish out-half stepping up and bisecting the posts in an unbelievable place kick!

Upon resumption, Pearson made a lasting impression in defence with another jackal turnover when Saracens were camped out in the Irish 22.

Former Exile Sean Maitland crossed the whitewash after a poke through from Elliot Daly, Farrell converting with Sarries coming again.

Billy Vunipola intercepted play from halfway and poked through into the goal area, but a trailing Ben Loader touched down to gain a goal line drop-out.

Brilliant counter-rucking from Irish replacement Rory Jennings in broken field play lifted the crowd of the Gtech Community Stadium, a defiant roar of relief after minutes were spent with their backs against the wall.

A spill forward from try-scorer Maitland meant Irish then held the cards, relentlessly poking holes in the opposing rearguard before an offside penalty gave Jackson a shot at the tee, which he converted.

Jennings was to spend time in the bin for a high tackle, and the complement was to be further reduced with a maul infringement from Simmons.

Irish though were strong once more in defence, incoming Caolan Englefield holding up a Sarries attempt at a try and aiding in the Irish cause.

More sensational work at the breakdown from van Rensburg and Hassell-Collins saw another penalty win for a battle-hardened, 12-man effort from those in green.

Mark McCall’s men were to get the next points on the board through a Farrell three-pointer, earning the kick through a Billy Vunipola breakdown penalty - Irish were still two to the good with five to go.

The dream end to a battle of a London derby began with a Chunya Munga steal at the lineout, first receiver Tom Pearson going on a galavanting, 50+ metre run that was eventually brought down. Upon recycling the ball, Chandler Cunningham-South cruised through over the whitewash, and with Paddy Jackson’s conversion, a famous win was within touching distance.

A collection of the restart and subsequent penalty win wrote the result in the record books, extending a domestic unbeaten run against Saracens that has lasted since August 2020, and handing and the first defeat in the Saracens loss column!