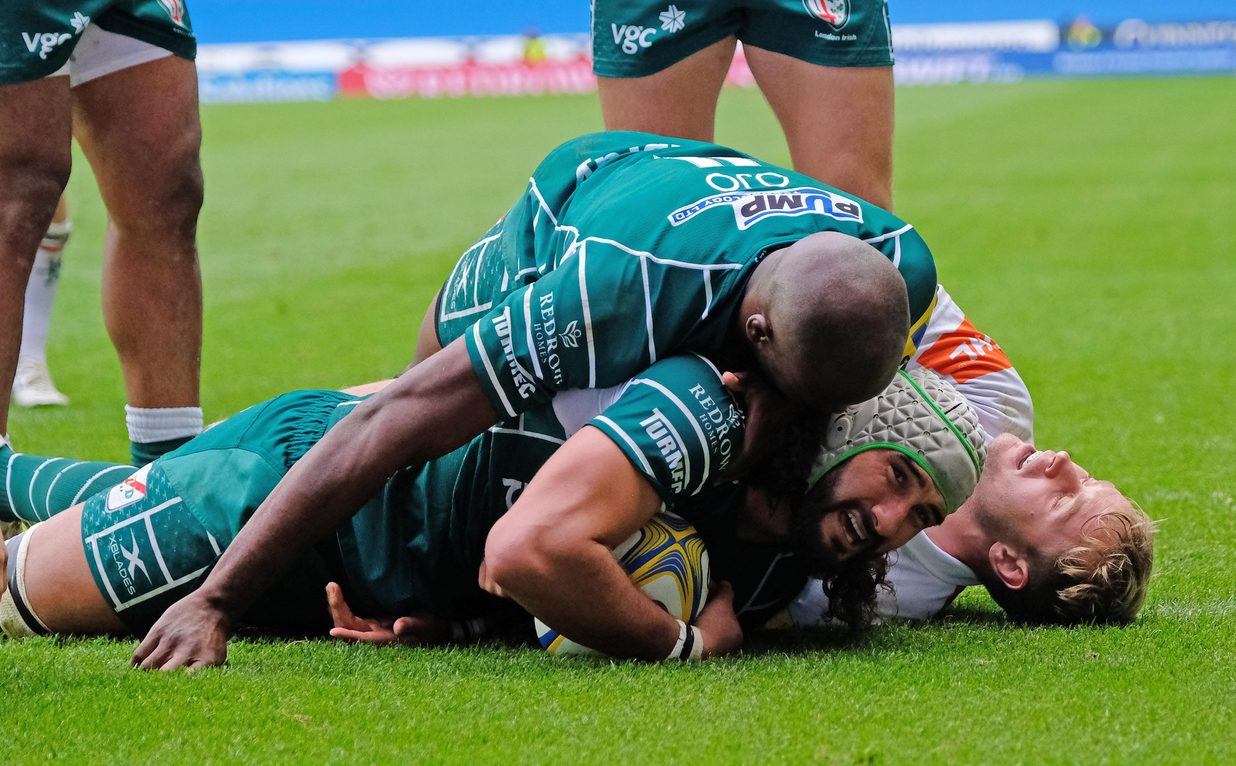 Alex Lewington’s last gasp try secured a precious losing bonus point for London Irish as they were edged out 28-27 by Leicester Tigers at the Madejski Stadium.

Lewington, who tops the club’s try-scoring charts this season, touched down in the corner to bring a raucous home crowd to their feet.

The point means Irish are now five points clear of bottom side Worcester Warriors going into the European break.

Irish will want to build on the final 20 minutes of Saturday’s contest, captain marvel David Paice and wing Lewington dotting down to give their side a shot in the arm as the campaign gathers pace.

Leicester’s Nick Malouf opened the scoring as early as the fourth minute, a looping pass from Matt Toomua giving the flyer an easy route to the line. George Ford was unable to convert from the touchline but it was first blood to Matt O’Connor’s troops.

Tigers continued to assert their dominance and two Ford penalties in quick succession increased Leicester’s lead to 11-0 midway through the first half. It could have been more had the Tigers capitalised on a succession of attacking opportunities as they continued to enjoy the lion share of possession.

While a scrambling Exiles defensive line denied the likes of England international Jonny May from scoring before the break, fellow red rose Ford ensured his side kept the scoreboard ticking over with a penalty 10 minutes from the interval.

14-0 up, Leicester’s rearguard was significantly tested with half-time approaching. Scrum-half Ben Meehan was orchestrating affairs at the breakdown as Irish inched their way towards the try line. Greig Tonks who was handed his first start of the season, thought he had hauled his side back into the match when he burrowed his way to the line. However, the eagle eyed JP Doyle deemed that he was held up over the line.

Tonks was in the thick of the action in the following phase of play, the Scotland international tackled off the ball by Gareth Owen, who was yellow carded. Tommy Bell slotted home the subsequent penalty to reduce the arrears to 14-3.

Leicester began the second period in quick fashion, flanker Will Evans marauding his way through a gap to dive over. Ford’s simple conversion put Leicester 21-3 ahead.

Not the start Kennedy and co had in mind, but Bell’s 47th minute penalty settled the Exiles down with his points proving crucial come the end of the game.

Inking a new deal this week, Blair Cowan backed it up with a well-worked try after excellent work from Irish’s back division. Cowan shrugged off Mathew Tait and Harry Wells on his way to the line following a neat offload from Aseli Tikoirotuma. Bell’s exquisite touchline conversion reduced the deficit to 21-13.

Just past the hour mark, the impressive May crossed the whitewash to bag his sixth try in six games as Leicester gave themselves some much needed breathing space at 28-13.

Seemingly heading to a comfortable victory, Tigers were pushed all the way to the death by a dogged Irish outfit.

Paice’s converted try on 68 minutes set up a grand finale as Irish looked to snatch a bonus point in the closing stages.

Carry after carry, the sheer brutality of the collision was plain to see, with the Exiles pushing for that one opening. Harry Elrington’s superb ball carry got Irish within touching distance of the line, before the ball was moved wide to Lewington for what could prove to be a decisive score come what May.