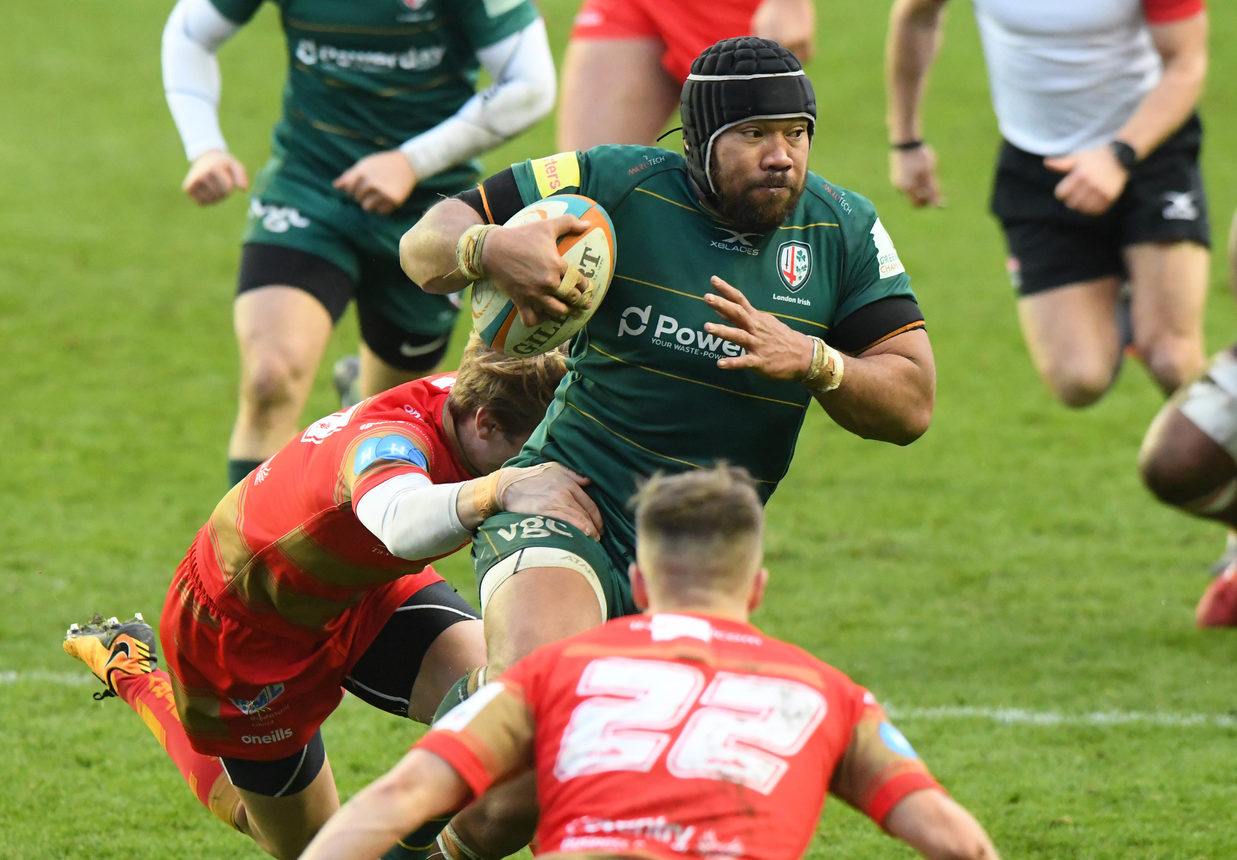 London Irish progressed to the semi-final of the Championship Cup virtue of a comprehensive performance against a physical Coventry side.
It was a scrappy start to the match as both teams struggled to make their time on the ball count. It took until the 7th minute for the deadlock to be broken as Coventry winger Andy Bulumakau intercepted a flat pass to run half the length of the pitch to give the visitors the early lead. Fly-half Will Maisey, making his 100th appearance for Coventry, added the extras to extend the score to 7-0.
Coventry’s try acted as a wake-up call to the hosts and it only took until the 13th minute for Irish to respond. Harry Elrington crashed over the Coventry line from short range to cut the deficit to 7-5. Jacob Atkins slotted home the conversion to level the score at 7-7.
The Exiles looked to be on top after some powerful carrying from Lovejoy Chawatama as the home side searched for another score.
Thanks to captain Barney Maddison, they found it in the 19th minute. The second row picking a ruthless line to split the Coventry defence and dive over for the score. Atkins converted from a tricky angle to extend Irish’s lead to 14-7.
The big tackles continued throughout the first half with a stand-out hit coming from a combination of Harry Elrington and Max Northcote-Green to allow the Madejski Stadium crowd show their appreciation.
A series of hardworking defensive efforts were keeping Irish at bay but, on the 37th minute, the Exiles were awarded a penalty in front of the Coventry posts as the visitors were deemed offside.
Atkins converted the penalty to make the score 17-7 in Irish’s favour at half-time.
The start of the second half provided more big collisions, this time in the form of a ferocious Ben Loader tackle to stop a Coventry attacking phase in its tracks.
However, it was Coventry to make the the first dent on the score board in the second half. On the 53rd minute, Irish were penalised for not rolling away and Will Maisey struck the penalty through the posts to make the score 17-10.
Sam Twomey was introduced into the match 54 minutes in, making his first appearance for London Irish after a long-term injury had kept him out since the start of the season.
With 64 minutes on the clock, Ben Loader broke tackles and exploded through a gap to run 20 metres and slide over the Coventry try line, making the score 22-10. Atkins was again on hand to add the extras and Irish’s lead moved to 24-10.
Coventry showed their tenacity and refused to give up. On the 75th minute, Ben Nutley shrugged off a tackler to sprint over the Exiles line, cutting the score to 24-15. Maisey’s conversion was successful, leaving the match poised at 24-17.
Straight from the kick-off, Irish applied the pressure and were awarded a penalty. Atkins pointed to the posts and knocked over the kick to push Irish’s lead to 27-17.
The visitors were not deterred and came straight back at the Exiles. The pressure deemed too much as Maddison was shown a yellow card for slowing the play down illegally.
However Irish held firm on their own line before kicking the ball into touch, grabbing a 27-17 victory and safe passage into the Championship semi-final.