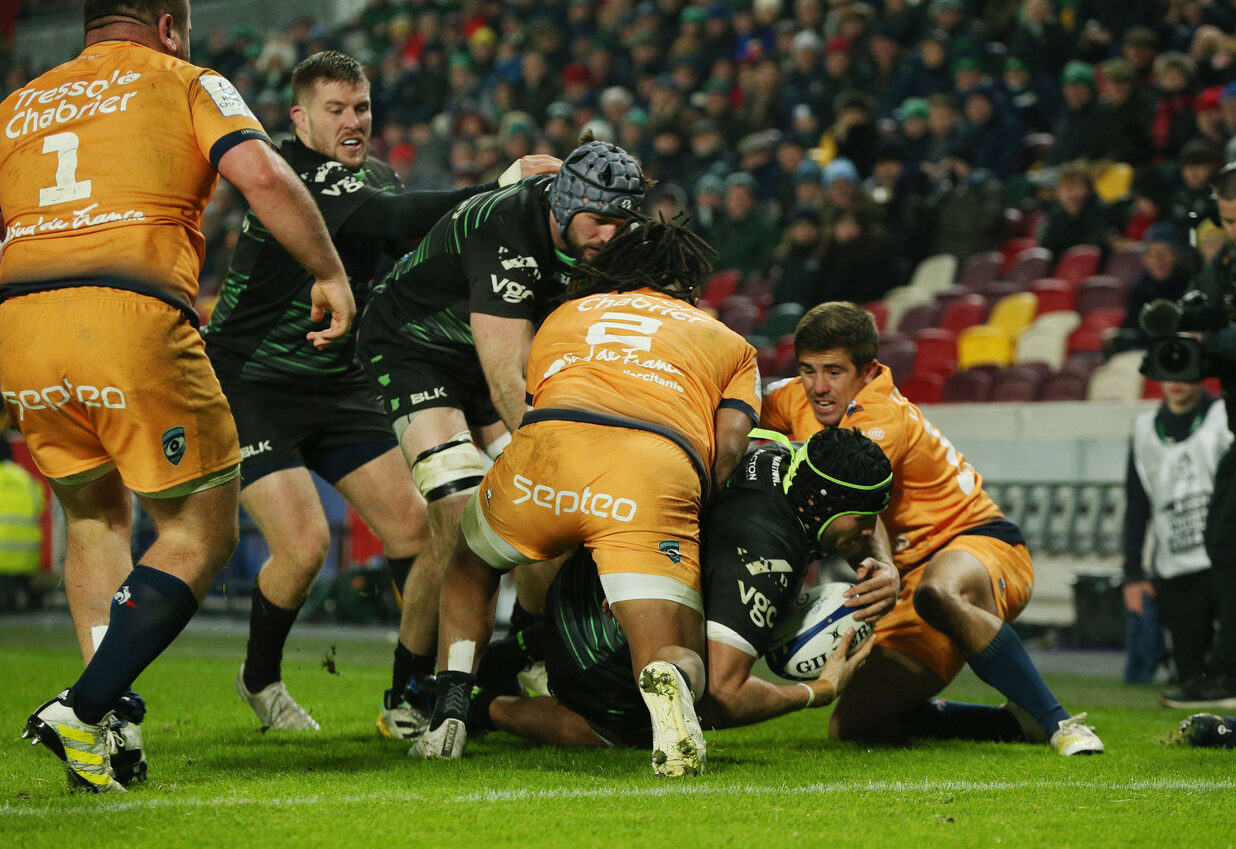 London Irish made an entertaining return back to the Heineken Champions Cup, earning a losing bonus point against reigning Top 14 champions Montpellier Hérault in a 32-27 defeat at the Gtech Community Stadium.

Crucially, however, Agustín Creevy was sent off in the second quarter, meaning Irish would have to play a whole half of rugby a man down, but nonetheless performed admirably.

A score from Cobus Reinach on the cusp of half time set the tone for what was to come in the second stanza, Montpellier reversing the scoreboard with the help of a Thomas Darmon brace and another from Alexandre Becognee.

Montpellier threatened early, a knock-on from Irish handing them a put in and in the phases after they gained ground, but in his first start since September, Adam Coleman earned a jackal turnover.

Juan Martín González continued the possession turnover trend, this time from a lineout and Irish were soon in the lead from Paddy Jackson’s boot after the opposition were penalised for being offside.

Scores looked to be levelled via Louis Carbonel, the Exiles off their feet from the restart but the Frenchman’s effort was skewed left and wide of the uprights.

Carbonel would have a second bite at the cherry after Irish were illegally interfering at the ruck, this time converting and scores were level.

Ben Lam taking out namesake Ben Loader in the air meant Irish could find touch deeper into Montpellier territory, and although here was nothing doing for Irish in attack, an unforced error in Montpellier’s offensive game saw Zach Mercer knock-on.

Nevertheless, a penalty conceded at the following scrum from Irish handed their challengers three points in front of the posts, which their out-half took.

Irish would go to the corner in attempt for the game’s first try, Montpellier deemed not rolling away and Jackson’s excellent kick for touch aided in Irish’s move.

The Top 14 outfit pulled down the resulting maul, then penalised at the breakdown for not rolling away (which led to the yellow carding of Enzo Forletta), and also for an illegal scrum as the Exiles asked questions of the French champions.

A trademark tap and go from Ben White brought Irish within a sniff of the whitewash, but Juan Martín González was the first Irish player to score a try for the Club in a decade to peel off around the fringes, Jackson adding the extras.

A second lineout steal of the affair for González set Irish in motion, going left to right and back again to find Ollie Hassell-Collins to penetrate into the rearguard with a galivanting carry.

Possession was then switched infield with Irish in the opposing 22, Agustín Creevy with a beautiful tip pass to compatriot Lucio Cinti to dive over - Irish were flying with another converted score.

It was to be one of Creevy’s last actions, dismissed for a shoulder in contact but his side were resolute without the ball immediately, setting up a solid breakdown for the French to be penalised for approaching from the side.

A man down, Irish feared no one with González dotting down once more, Ben Loader with smart feet then finding his teammate on the left edge to score for a third converted effort of the first half.

Montpellier looked to strike back before the half’s end with the clock in the red, Cobus Reinach scoring despite confusion surrounding the scrum-half’s positioning when taking the ball from the breakdown, cutting the deficit by seven to 11 points at the break.

The opposing side came out strong in the opening 40, but a big tackle from Rob Simmons and excellent breakdown work alleviated some pressure for the time being.

Such was the teamwork on display, even González assumed lineout-throwing duties in Creevy’s absence!

Being offside at the breakdown once more saw Montpellier on the backfoot and Irish in the corner, but it wasn’t to be for Declan Kidney’s men in this instance.

Thomas Darmon was to grab the novel score of the second half, centre Paolo Garbisi finding the midfield partner for the former to touch down and Carbonel to convert.

Irish, only four points to the good now, had strong defensive showings, namely youngster Will Joseph putting Ben Lam into touch, but the Hérault-based outfit would eventually dot down again through Alexandre Becognee from short distance.

The visitors wasted no time in extending their lead, Darmon scoring his brace under pressure in the corner, but the unconverted try meant his side then sat eight points ahead.

Being offside once more, Irish went for the corner via replacement Rory Jennings, play then being called back for a high tackle on Chandler Cunningham-South with further penalties leading to the temporary dismissal of Léo Coly.

Irish’s put-in failed under pressure, but once Montpellier cleared their lines, they closed the gap and at the set-piece and Irish would go once again.

Ollie Hassell-Collins dived in the corner from a deft Jennings kick from hand, but it didn’t count, the winger’s foot deemed in touch – agonising.

The Boys in Green put more points on the board through a Jennings place kick in front of the post, then getting the restart with time on the clock but despite Irish’s best efforts moving forward, the game finished with a knock-on.