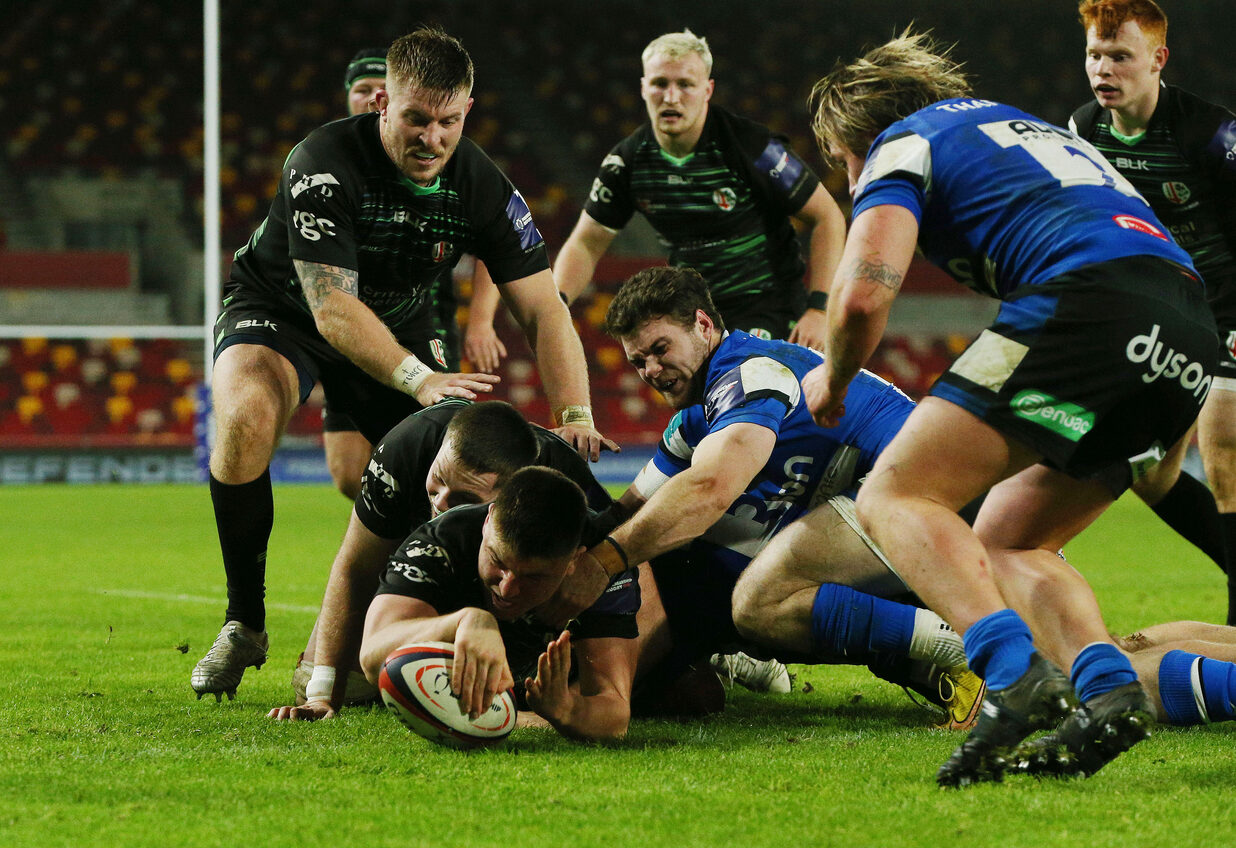 The Exiles’ forward power was showcased on a fine evening in Brentford, Matt Cornish bagging not one but two scores on his homecoming from injury.

Ed Scragg was to touch down for a first Club try in the first period, Cornish completing his brace in the second half after fine work with ball in hand to bring Irish into another visit to the opposing 22.

The all-important fourth try came via another effort from another hooker, this time replacement Isaac Miller, pushing over from the rolling maul with a late consolation for the visitors coming by the way of Tom Ellis.

The Exiles started combatively in defence, big hits from Logan Trotter and Facundo Gigena were shortly followed by a rip from Matt Cornish, Bath then penalised for not rolling away.

Despite an advancing Irish maul being forced into a turnover, the home outfit won back possession from an opposing put-in but Irish were pinged from the whistle of referee Sara Cox at the maul once again.

Astute work in defence from Bath’s Wesley White saw the back-row get over the ball when Irish threatened closest to the whitewash.

In an error-strewn opening quarter, Irish failed to make the desired impact after winning another scrum penalty and kicking to the corner, unable to maintain successful lineout manoeuvres.

Matt Cornish was the man to break the deadlock upon return from his three-month spell on the sidelines, reversing Irish’s previous misfortune at the throw in with a textbook catch-and-drive routine, Jacob Atkins converting on his 50th Club appearance.

Jack Walsh was introduced after Logan Trotter’s night was ended prematurely, suffering a serious leg injury carrying into contact upon another red zone entry for his team – all the best, Logan!

Having forced a knock-on error, a poor exit kick from Bath only encouraged Irish further with the ball worked through hands, Tom Hitchcock with a notable dexterous catch and carry.

His side would soon double their advantage with Ed Scragg finishing from short range around the fringes, Man of the Match Jacob Atkins’ quickly starting the chain of attack through a tap penalty out left before play was worked out right.

A magnificent searching box kick from Caolan Englefield brought Irish some more territory, bouncing before touch with an incomplete collection of the ball from Richard de Carpentier winning Irish the lineout.

No points were to be put on the board by Irish with the remainder of the first period, a searing linebreak from the captain Jack Cooke off the back of a lineout welcoming Irish back into action.

Fellow loose forward Ben Donnell got in on the carrying action, exposing a gap after some hasty line speed from his opponents and Irish were away into another 22 breach.

Several recycles of the ball later and Cornish was over for a triumphant try brace with a pick and go surge into the goal area, Atkins adding his third conversion on the night.

The Exiles looked close to the all-important fourth score; swift hands out the back to fly-half Atkins seeing him boot Irish ahead close to the line and pushing at the subsequent breakdown, only for Bath to escape out of the ruck.

Only for a dropped ball in grounding were Bath denied a first score of the game, Juan Schoeman spilling it in contact with the previous defensive set otherwise solid for the home outfit.

The replacement forwards were prevalent in Irish’s previous work off the ball, with new front-row consisting of Luke Green, Isaac Miller and Mikey Summerfield winning a scrum penalty.

Bath was to come again though, winning a jackal penalty near halfway in their own half and building forward with consistent strong outings, before a not straight lineout gave Irish back possession.

Back-to-back penalties won during Irish’s own put-in showed a consistency from starters to finishers in the pack, the Boys in Green winning a penalty after Walsh reclaimed a kick but was tackled high.

Brilliant work from replacement Lucas Brooke in his carrying through midfield and accurate passing helped in the Irish quest for a try bonus, Tom Hitchcock poking through a kick for Bath to take it into touch.

Despite losing the subsequent set-piece, Josh Smart jackalling the ball after his side couldn’t retain possession from a lineout afforded his Club another bit at the cherry.

Going for touch, the Exiles would push their way to five points with Isaac Miller dotting down for a deserved fourth and final Irish score!

With work still to be done off the ball, unfortunately a whitewash was not to on the cards as Tom Ellis budged over from a maul with Sam Harris converting.