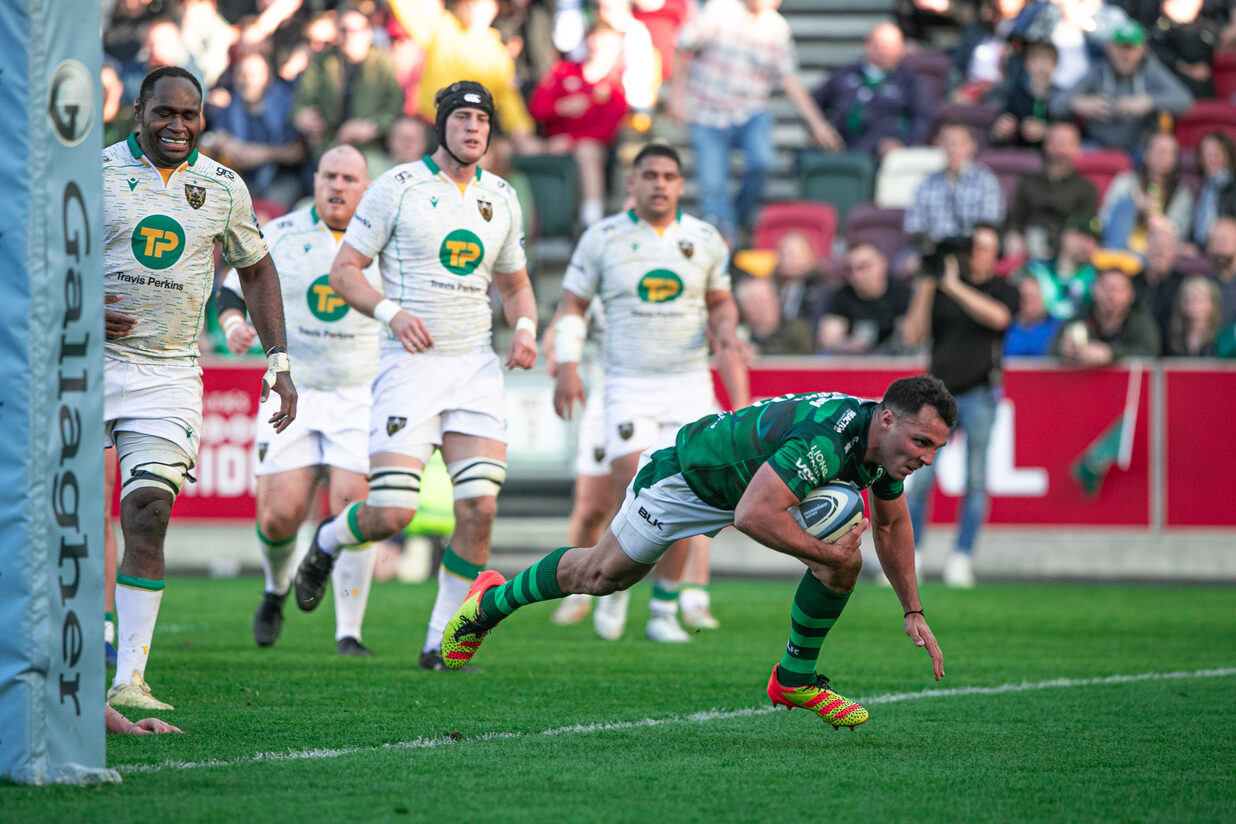 London Irish were beaten in Round 22 of the Gallagher Premiership as Northampton Saints walked away from west London with five points after a 42-22 win.

A poor showing from the Exiles could not dampen the spirits of the Exile Nation in front of a record-breaking rugby attendance of 15,085 at the Brentford Community Stadium.

Ollie Hassell-Collins got Irish underway with a positive start, but it was Saints who strolled into the break six points to the good after Tom Collins and Rory Hutchinson’s tries.

Saints were even more unrelenting in the second forty minutes, putting four more tries on the hosts but Nick Phipps’ late brace regained some pride for London Irish.

The mellifluous sounds of the BCS were the soundtrack to a fast start by Irish, with Kyle Rowe excelling on both sides of the ball but it was fellow winger Ollie Hassell-Collins who broke the deadlock.

The Exiles benefitted from men over on the left side, Seán O’Brien made serious yards before a smart offload to Hassell-Collins, who, with much work to do, accomplished a typically deft finish.

Paddy Jackson’s extras went awry but he made no mistake with a placed kick after Saints’ failure to maintain a consistent scrum, giving Irish an eight-point advantage.

Chris Boyd’s side were near to completing a breakaway of their own, but they would have to wait until their own 11 in Tom Collins crossed well in the corner with Dan Biggar’s conversion also good.

Referee Wayne Barnes conferred with TMO Jack Makepeace moments later and could see no reason to not award Rory Hutchinson with a try, the move spawning from a smart snipe by Api Ratuniyarawa from a ruck in his side’s own 22.

Nick Phipps was held up over the whitewash after an intuitive tap-and-go penalty, but Irish had the bit between their teeth and Rowe’s instep into the field off the flank looked to create opportunities but a knock-on halted any Irish continuance.

Rob Simmons’ illegal clearout at the breakdown meant Irish saw what little was left of the half down to 14 men, and an injury suffered by James Stokes meant Tom Parton came on for only his second appearance this calendar year.

A Fraser Dingwall and Courtnall Skosan combination raised alarms for the Exiles early on in the second period, and Ratuniyarawa nearly cashed in on a clean break but was met at the five metre line with Irish’s defensive brawn.

Nick Phipps’ illegitimate preventative measures to stop Sam Matavesi’s stroll to the line off a lineout drive saw him in the bin and Northampton were awarded a penalty try.

Saints were in again for their try-bonus with Alex Mitchell sauntering under the posts following Skosan’s pacey breakaway, Fraser Dingwall then scoring after a penetrating central run inflicted more damage on the home side.

Just when it looked like the boys in green were giving the BCS crowd something to shout about again, Hassell-Collins was tackled in the opposing 22 by Northampton players seemingly offside, and the travelling outfit were able to clear.

Tom Collins’ inventive kick from hand exposed space in the Irish backfield and was first to meet the ball in the goal area to notch Saints’ sixth try.

Nick Phipps made an impact on his return to the park and raised the volume again to bookend the strenuous affair for Irish, with quick movement seeing him through a short carry over the try line, not once but twice.

George Furbank was given his marching orders for a deliberate knock-on in the build up to Phipps’ brace and the tricky afternoon was ended with a touch finder by Saints.