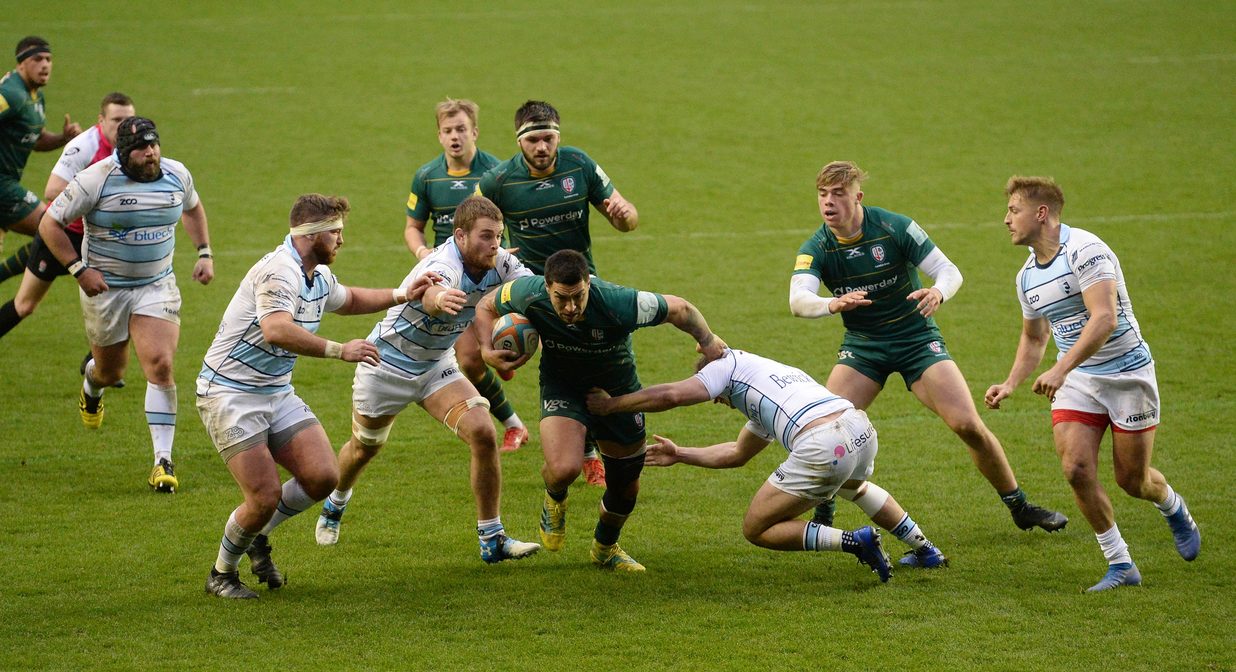 London Irish came through a tough Bedford Blues test to make it three wins from three in the Championship Cup.

Tries from Ollie Hoskins, Scott Steele and Ben Loader was enough to hold off a resilient Bedford Blues side at the Madejski Stadium.

The visitors started the quicker team and put pressure on the Exiles from the kick-off. The Blues crossed the line with 2 minutes on the clock thanks to winger Pat Tapley. A slick backs move sent Tapley into the corner and moved Bedford into a 5-0 lead. Fly-half Lewis Robling was unable to add the extras from out wide.

With the opening try acting as a wake-up call to the home side, Irish hit back immediately through immense work from the Exiles pack.

A successful lineout set up a rolling maul, ensuring front rower Hoskins the chance to crash over the Bedford line to level the score at 5-5 after just 5 minutes of play. Stephen Myler continued his form from the kicking tee and nailed the conversion to move the score to 7-5.

Both sides showed their attacking intent after a bruising start to the match with Bedford enjoying a great deal of possession following the Exiles opening try.

On the 14 minute mark, Exiles captain Barney Maddison thought he had extended the home side’s lead when he pushed his way over the try line from close range. However, referee Matt Turvey judged the second-row to be held up and awarded Irish the scrum.

Irish did extend their lead after 22 minutes of play thanks to some clever work from scrum-half Scott Steele. Profiting from a dominant Irish scrum, Steele exploited a slight gap in the rushing Bedford defence to reach out and dot down for the Exiles second try of the afternoon. Myler popped over the conversion to take the lead to 14-5.

A couple of minutes later, youngster Ollie Hassell-Collins almost added to the scoreline after picking up a loose ball in the middle of the pitch. The winger sprinted 35 metres to come within inches of the Bedford try line, only to be tackled by a recovering defender to force a knock-on.

Just after the half hour mark, Bedford were undeterred by the home sides response and fought back. Earning themselves a penalty in front of the Exiles posts, Robling nailed the penalty to cut the Irish lead to 14-8.

The last play before half-time saw centre Terrence Hepetema break through the Bedford tacklers to get the Madejski crowd on their feet. Again, the Blues defence came to the rescue to prevent the Exiles from extending their lead.

After half-time the physical encounters continued as Max Northcote-Green led the home side’s attacking ventures thanks to some clever running lines.

As 50 minutes hit the clock, back-row Matt Rogerson smashed through the Bedford line to put Hassell-Collins within inches of the visitors line before being bundled into touch.

Irish continued to press, coming close to adding to the lead thanks to a gliding run from the influential Myler. But, a resulting offload couldn’t reach a supporting teammate and possession was handed back to the visitors.

At the 71 minute mark, Bedford closed the gap virtue of a Huw Worthington try. The replacement profited from an overlap to score in the corner. With the conversion missed, the score stood at 14-13 to Irish.

The crowd sensed the magnitude of the next score and gave the home side an extra push to help get the team over the line. The support proved vital and Ben Loader slid over on the 74th minute to extend the Irish lead once again. Myler struck the extras to move the score to 21-13.

In the dying embers on the match, Bedford peppered away at the Exiles line. This took its toll and flanker Blair Cowan was shown a yellow card after being deemed to have brought down a maul illegally.

The 14 men stood firm, turned the ball over and kicked into touch to ensure a 21-13 victory and a third win in as many games in the Championship Cup.