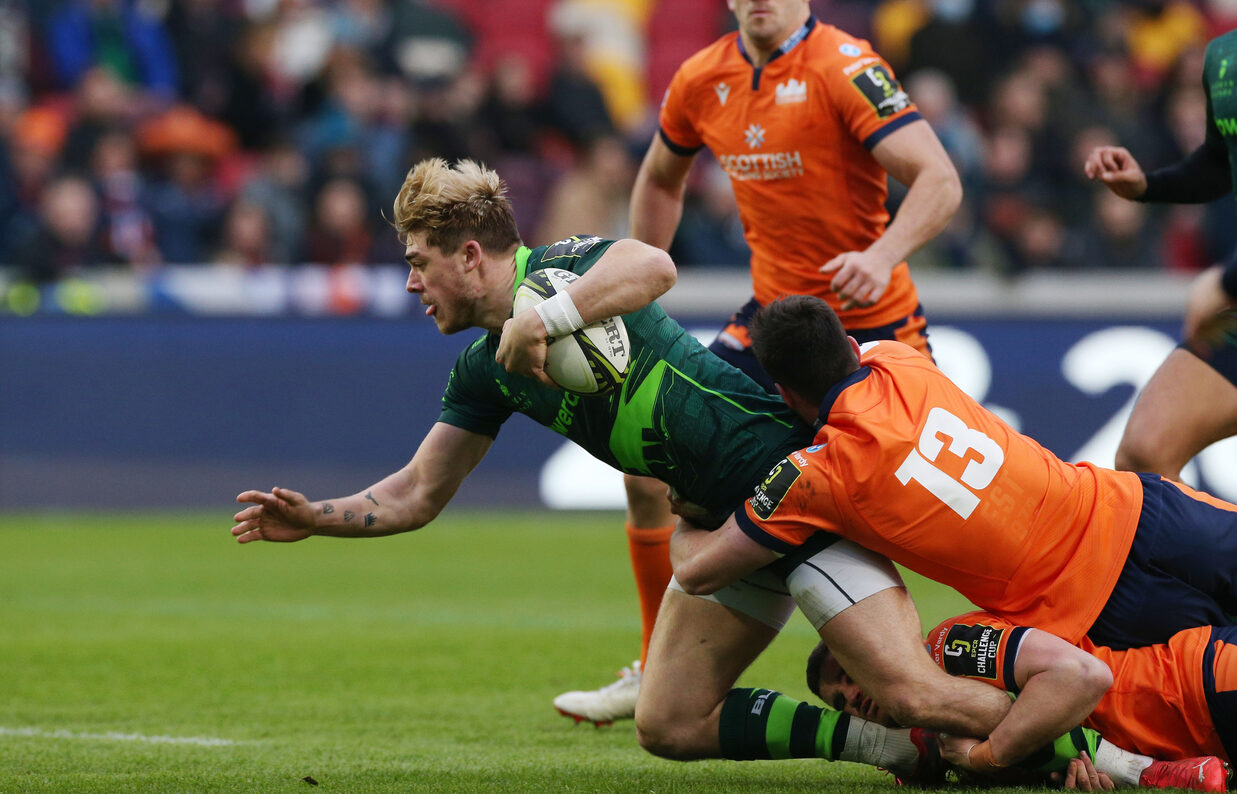 The Exiles trailed by ten points at the interval, with the visitors scoring both of their two tries in the first 40 to set up a mighty task for the hosts.

Irish’s challenge only grew taller after Agustin Creevy’s dismissal with more than 20 minutes left, but the Exiles were determined to keep their unbeaten Challenge Cup record intact.

Starting off with Ollie Hoskins’ burst over from close range, his namesake was the man to register the all-important final score with the aid of Paddy Jackson’s extras.

A subdued opening subsided as the deadlock was almost broken with Edinburgh coming out on top in the first meeting of the packs, electing to split the posts via Emiliano Boffeli’s boot, only for his effort to strike the upright.

What was becoming a game of fine margins saw the Exiles nearly register their own first points by way of second-row Rob Simmons, who was held up over the line, and then Albert Tuisue, who crossed the whitewash only to be pulled back for a double movement.

Rapid running game in the midfield from both sides prompted an elevation in the intensity of the affair, Irish persisting with phases in the red zone accomplished with deft backhanded offloads from Nick Phipps and Kyle Rowe, against his former side.

The ball was worked out to Benhard Janse van Rensburg in the same phase but the home outfit were held up once again; the famous defence that the visitors executed on their last trip to London against Saracens was seemingly in full flow again this afternoon.

Mike Blair’s side worked their way into some territory and could flex their attacking threat for the first time, and it was Adam McBurney who crossed over, spotting a gap in a ‘backs against the wall’ backline to touch down, Boffeli adding the extras.

Rowe ensured that Irish were not behind for too long, executing a magnificent finish on the right flank to match the sharp sequence that preceded it, Paddy Jackson nudging over the touchline conversion to level the scores.

The free-flowing spectacle expected with a meeting of such sides began to take shape as Ramiro Moyano crossed next for the Scots following an offload from Blair Kinghorn, although the winger came off worst from the contact leading to the try and was his last action, replaced by Jaco Van der Walt.

Boffeli was on hand to extend his side's lead to 10 points from the tee, and Jackson had the chance to repeat the same for Irish but decided to go for the corner in a bid to reduce the deficit before the break, only for the subsequent maul effort to be successfully challenged by Edinburgh.

A failure to roll away at the ruck enabled Irish to have their maiden opportunity to claw back the scoreline in the second period; and after much deliberation from the officials, Hoskins successfully did so under the posts which was successfully converted by Jackson.

A rather bizarre sequence of events led to Nick Phipps dotting down just moments later, but a TMO intervention adjudged Irish players to be offside after a pass striking Simmons’ head created the space for Irish to score, the scoreline remaining with a slim three-point lead for the visitors.

Jaco van der Walt’s cross-field kick from hand found Kinghorn on the right wing but a try-saving tackle from Ollie Hassell-Collins spared Irish from further difficulty for the moment.

Nevertheless, Creevy's game ended prematurely after he was shown a red card.

Van der Walt’s penalty only increased arrears for a now 14-man Exiles team with 15 minutes left, however an offside penalty awarded in the favour of Declan Kidney’s men offered up an opportunity for a converted score, and in turn, a lead.

A resolute Edinburgh countered their host’s rolling maul, won back possession and built up the Brentford Community Stadium pitch with territory, commendably stifling any Irish attempt at a fightback.

Yet another offside penalty was awarded in the favour of the boys in green and Jackson kicked for touch on the corresponding wing, it was finely poised for an all-out attack on the Edinburgh whitewash.

Countless short bursts towards the line eventually paid off with replacement front-row forward Cracknell the man to crack the code for Irish’s breakthrough; the ever-reliable Jackson edging the hosts back in front with a couple of minutes remaining.

The crowd at the BCS were made to sweat for the final whistle, with a penalty conceded on Irish’s ‘22 from the restart giving an Edinburgh put in at the scrum.

After several resets, referee Gianluca Gnecchi sealed the result for Irish as Edinburgh were unable to maintain a legal scrum- Paddy Jackson gleefully kicking for touch for the final time.