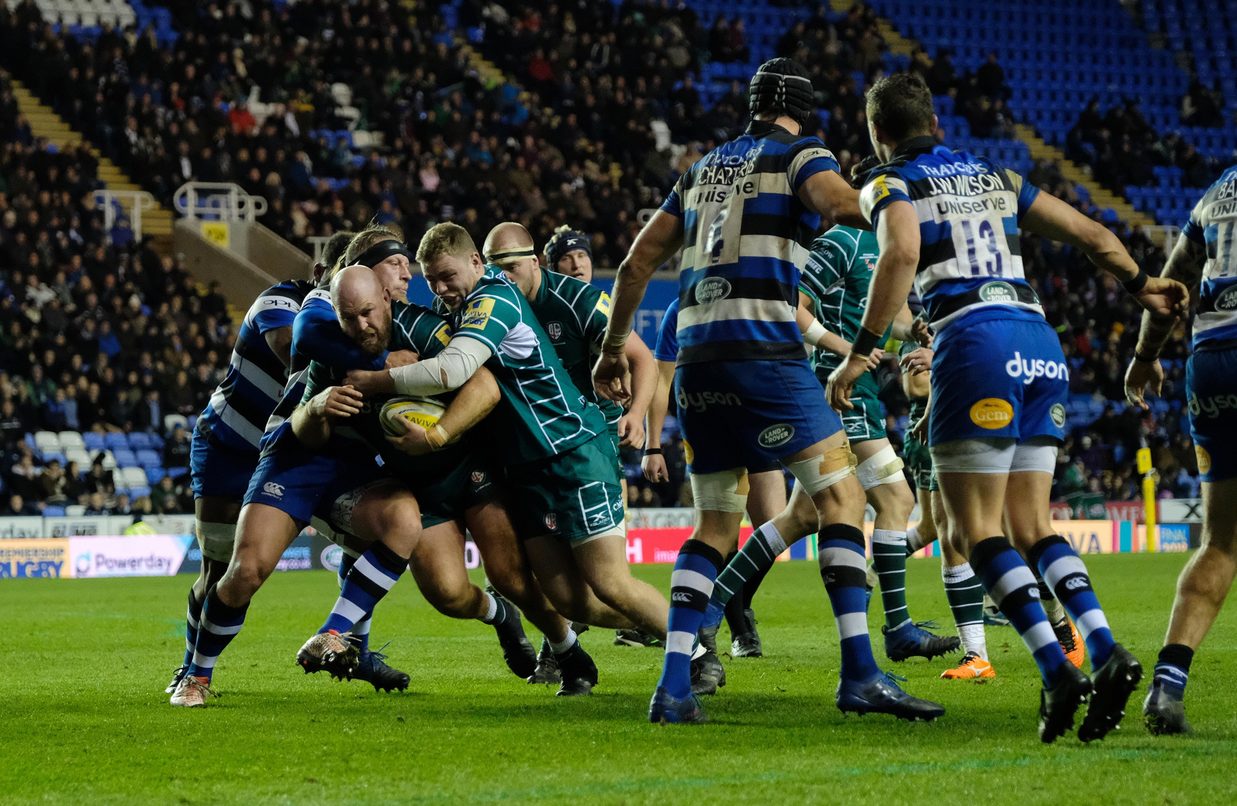 London Irish went within a whisker of sealing a memorable comeback victory over Bath Rugby in the Aviva Premiership on Sunday.

Trailing 22-18 with just two minutes to play, the Exiles, backed by a buoyant crowd at the Madejski Stadium, went through 31 phases as they trundled the ball up towards the line in search of a last gasp winner.

It was frenetic stuff, James Marshall’s lung busting line break getting his side on the front foot to set the platform for the Irish heavies to inch their way towards the line.

However, Bath to their credit, stood firm to unrelenting Irish pressure with referee Thomas Foley eventually awarding the visitors a penalty deep into injury time.

A display dripping with spirit and desire, Irish will be hoping to take the final knockings of this contest into next weekend’s showdown with Wasps at the Madejski Stadium.

The afternoon started well for the Exiles, Tommy Bell’s third minute penalty giving the hosts the early advantage after Bath were penalised for not rolling away at the breakdown.

From the restart, Bath were immediately on the attack and after a period of sustained pressure inside Irish’s 22, centre Matt Banahan busted through two would-be tacklers to touch down under the posts. Bath wing Aled Brew was the catalyst for the score as he scythed his way down the near flank before offloading to Banahan on the inside. Burns’ simple conversion put the West Countrymen 7-3 in front.

Burns increased his side’s lead to 10-3 on 13 minutes with a penalty, but back came Irish with the impressive Marshall bagging a try to close the gap to 10-8. Scrum-half Ben Meehan found Marshall with a quick free-kick to allow the full-back to dive over in emphatic fashion.

Bath continued to look menacing in attack with Matt Garvey and Zach Mercer getting the visitors over the gain line. Irish were strong in the collision and restricted Burns to a drop-goal and penalty before the break, while Bell nailed a penalty of his own with the score poised at 16-11 to Bath at half-time.

On 47 minutes, Burns’ pinpoint boot stretched Bath’s lead to 19-11 as they looked to push home their advantage. The fly-half was orchestrating affairs and kicked his fourth penalty of the day 10 minutes later to make it 22-11.

Not deterred by the 11-point deficit, Irish rallied and remained very much in the game thanks to a combination of some crucial intervention in the tackle and direct attack play. A series of barnstorming carries from Joe Cokanasiga had the Exiles faithful on their feet and gave his side much needed momentum in attack. Crashing through a flurry of Bath defenders, Irish got to within a metre of the try line to allow replacement scum-half Scott Steele to snipe his way to the line. Greig Tonks, who came on for Bell on 55 minutes, took over the kicking duties to convert and narrow the gap to 22-18.

Setting up a frantic finish, try as they might, Irish were unable to force their way over the try line as Bath held on to cement their position in the top four of the Aviva Premiership.