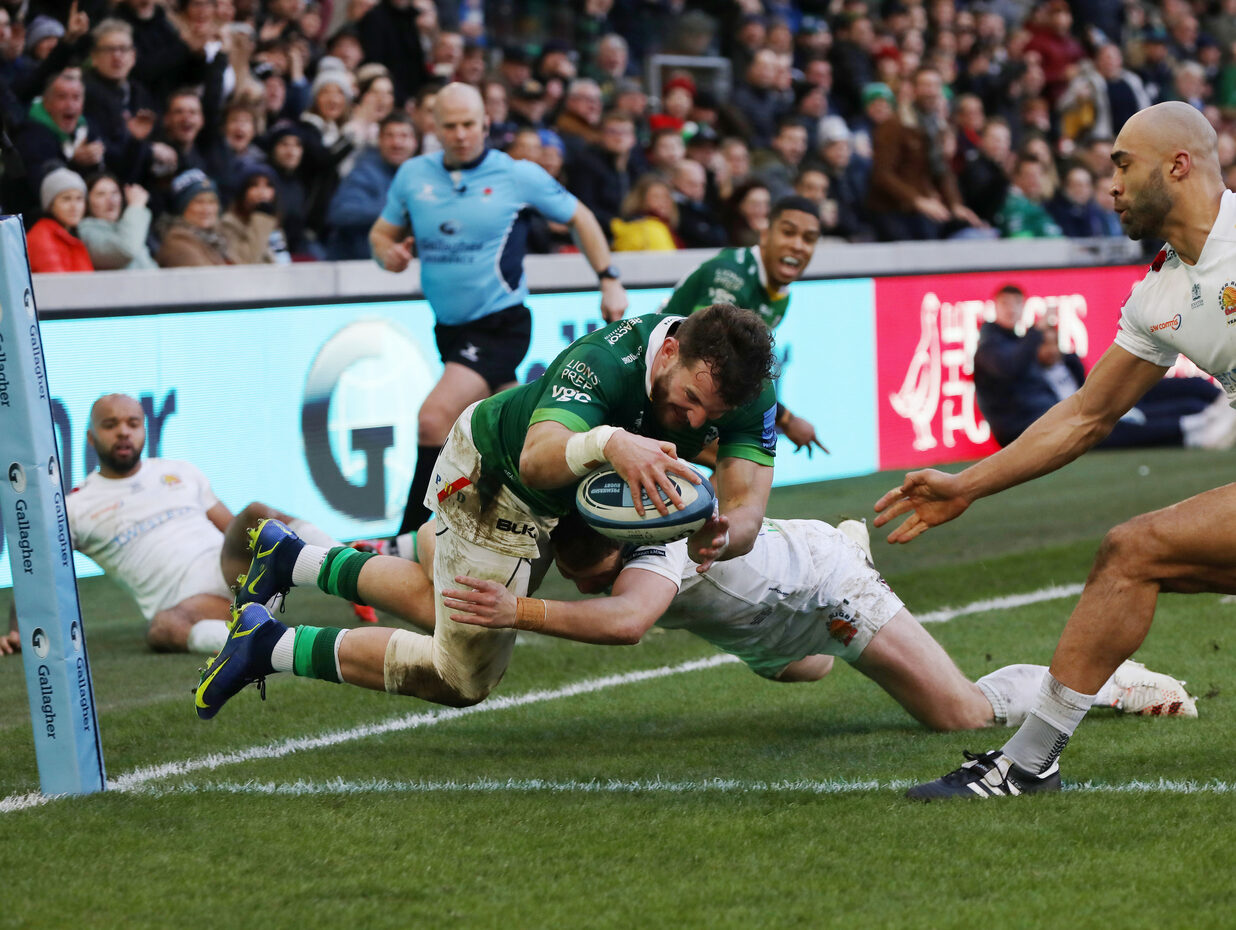 In front of a record attendance of 11,555 at the Brentford Community Stadium, a resilient London Irish held off Exeter Chiefs to leapfrog Rob Baxter’s men into sixth in the Gallagher Premiership.

Exeter raced into a two-try lead in the opening 20 minutes courtesy of Olly Woodburn and Patrick Schickerling’s efforts, but Irish remarkably held the lead at half-time with 18 unanswered points in the second quarter.

Matt Cornish strong-armed himself over the try line for his side’s opening score, with James Stokes finishing off a brilliant flowing sequence with the clock in the red before the break.

With all of the points scored in the opening 40, the mighty Exiles put in an incredible shift without the ball to close out the affair, particularly in the final 20 minutes of action in West London.

Exeter’s high-pressure valve in the Irish red zone set the tone for the first few minutes following the Exiles being penalised for blocking – and the visitors were quick to make their territory count.

Winger Woodburn found himself the central point of attack, crossing over from a short burst after being on the receiving end of a Jack Maunder offload – Joe Simmonds adding the extras.

Simmonds’ well executed 50:22 kick was the foundation of the Chiefs second try, camping his side out deep into the Irish half with the host’s discipline found wanting throughout Exeter’s phase play.

When referee Matt Carley brought a penalty back for Exeter in front of the posts, Schickerling was next to barrel his way over just shy of the left upright to reward Simmonds with another simple conversion.

Irish’s time was now to get in on the act before the scoreline ran away from them, and Matt Cornish was the man on hand to ground over the line, taking a helpless Woodburn over with him.

Having been unable to add the extra two points, Paddy Jackson elected to go for the posts minutes later to claw back the scoreline to within six, after referee Carley’s call to reverse his awarding of a penalty from the Chiefs to the Exiles.

Tom Pearson’s strong venture through the Chiefs’ backline earned Irish some much-needed possession up the park, and Jackson added another three points as Chiefs were adjudged to be offside in the resulting breakdown.

Rob Baxter’s men looked to finish the half the stronger side and extend the lead, but the boys in green did well to force a penalty with Chiefs pounding away at the whitewash.

Instead it was Stokes who gave the Exiles the advantage going into the interval – Jackson feeding the returning Ben Loader to turn provider for the full-back, with both attackers deemed to still be within play in the sequence after a lengthy and rather painful review.

Irish resumed from the break determined as ever, but successive penalty kicks to touch and their resulting lineouts returned no points for the Exiles as a knock-on gave possession back to Exeter.

Woodburn’s hands in the ruck was the final action from the try scorer before being replaced by Josh Hodge, the first of a build-up in penalties which culminated in an Ian Whittten knock on and an Irish scrum five metres out.

Even more Chiefs penalties were conceded at the same set piece, but they were finally afforded some relief when Irish this time couldn’t maintain a final legal counter in the scrum.

The Exiles’ rearguard defence was tested throughout the rest of the affair, once forcing a knock-on, but the visitors, four points behind, kept bashing away before replacement Josh Hodge was penalised for not releasing.

With five minutes remaining of the game, Jackson looked to take his haul to double figures and Irish’s lead to a converted score, but his effort breezed wide of the posts.

Sensational solo work, firstly from Kyle Rowe to recover a high ball, and then by Tom Pearson to force a penalty at the breakdown, brought Irish some valuable time with less than two minutes to go.

An offside penalty gave Jackson a second bite at the cherry in the last five minutes to secure the result from the tee, however his effort went wide again but with the ball dead, the most important final points were Irish’s.