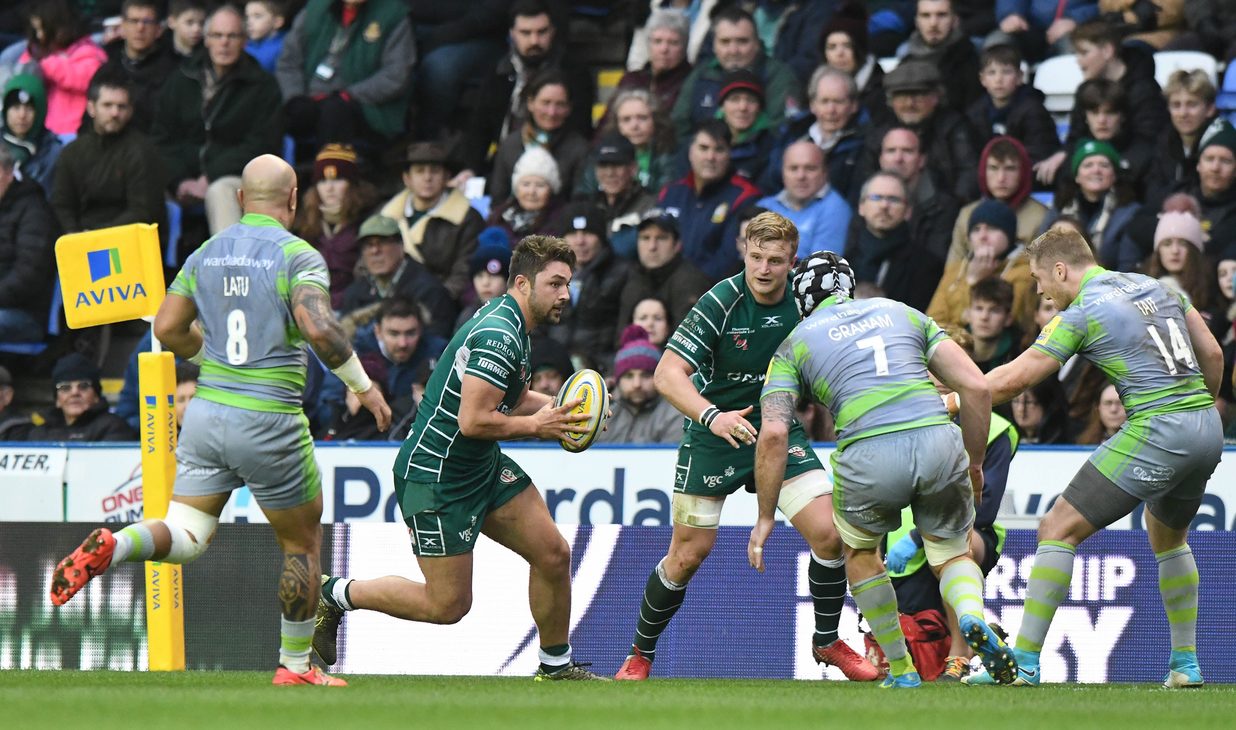 London Irish ended 2017 with a losing bonus point as they were edged out 15-20 by Newcastle Falcons in front of the Exiles’ biggest crowd of the season at the Madejski Stadium.

Greig Tonks’ penalty four minutes from time earnt a point for the Exiles, but the afternoon could have been so much better had the ball bounced kindly for Joe Cokanasiga who was in hot pursuit of a deep kick downfield. The powerful wing went close to latching onto Tonks’ lofty kick on the hour mark, but Simon Hammersley mopped up play for the visitors.

After Tonks had put Irish 6-3 up with two quick-fire penalties eight minutes into the contest, Newcastle wing Alex Tait bagged the first of his two tries. Tait charged down Tom Fowlie’s clearance to touch down in the corner on 23 minutes. Flood sliced the subsequent conversion and Newcastle led 8-6.

Three minutes later Tait crossed for his second score of the game, catching a sublime cross field kick from Juan Pablo Socino to dot down in the far corner. Flood made no mistake this time with the extras to extend the Falcons’ advantage to 15-6.

Tonks’ third penalty of the afternoon on 28 minutes cut the gap to 15-9, but on the stroke of half-time Vereniki Goneva squeezed in at the corner on the back of Mike Coman’s yellow card. Working through the phases, Newcastle’s heavies demonstrated patient build-up play, before the ball was flung wide to Goneva on the flank.

20-9 down at the break, Irish came out for the second period in determined mood and kept the northeasterners at bay for the duration of the half. A Tonks penalty on 50 minutes, his fourth of the game, reduced the arrears to 20-12 as the Exiles welcomed back Coman from the bin.

Looking to exert serious pressure on the Falcons’ try line, the Exiles were foiled by an excellent Falcons defence. After the bounce of the ball denied Cokanasiga glory in the far corner, Newcastle thought that they had secured the try bonus point by virtue of a dominant rolling maul. However, the TMO ruled that the ball was not grounded and Irish were very much still in the contest.

After Tonks had missed an earlier penalty from half way, the Scot made amends from similar range on 76 minutes to ensure his side picked up a point ahead of next weekend’s Aviva Premiership trip to Leicester Tigers.