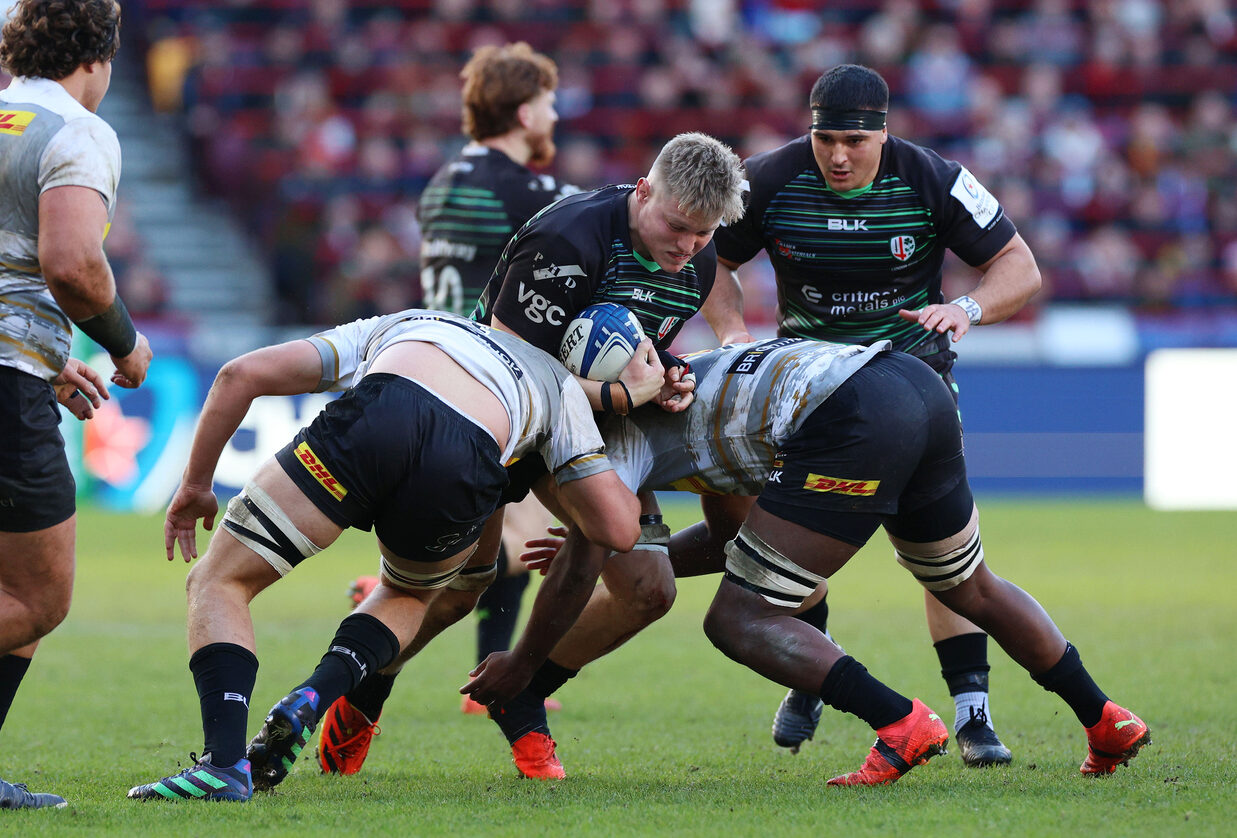 London Irish fell to a 28-14 defeat at the hands of reigning United Rugby Championship winners, DHL Stormers, in the third round of the Heineken Champions Cup.

The South African outfit would take a 21-0 lead into the break with tries from Ruhan Nel, Suleiman Hartzenberg and a penalty try, Irish going down to 13 men after a Ben Loader red card and Juan Martín González yellow card.

Irish would reply in the second half with a penalty score of their own, as well as Danilo Fischetti’s try, but Angelo Davids’ early five-pointer in the second period contributed to the win for Stormers at the Gtech Community Stadium.

Stormers were caught offside in the early stages and with a Rory Jennings touch finder, Irish had their first entry to the 22 but a steal at the lineout reversed possession swiftly.

The away side were first to blink in terms of knock-ons, Suleiman Hartzenberg spilling the ball as the teams exchanged kicks, but a charge down on a cross-field punt put the pressure back on the Exiles.

John Dobson’s side raced away but sensational tracking back from Juan Martín González saw the Argentine international close down an onrushing Angelo Davids, forcing another handling error on the opposing side with Stormers then conceding a penalty at the resulting scrum.

Irish next came out on the wrong side of referee Ludovic Cayre, being penalised for crossing whilst fielding a kick, closing the gap at the lineout and then for a high tackle.

En route to the try line from a rolling maul, the move was brought down illegally and Irish conceded a penalty try, González being sent to the bin for the breakdown infringement.

The South African outfit looked to have a second score, Davids dotting down after his side ascended up the park from a reversal of possession at the put-in but a forward pass from Manie Libbok to the winger stopped the try.

In the build-up, however, Ben Loader was adjudged to have made high contact with Libbok, and the Irish full-back was given his marching orders – the west Londoners down to 13 men for the time being.

The home side survived their opponents’ lineout drive as the latter conceded a penalty for closing, and it was Irish’s turn to now maintain possession with strong phase play.

An excellent Luca Morisi mispass and ball out the back from Benhard Janse van Rensburg set Ollie Hassell-Collins away, the wing nudging ahead and Stormers looked to have conceded a penalty with work over the ball, but there was nothing doing.

Rory Jennings would have a chance at the posts but the attempt was awry, the Cape Town Club then working ahead before former Stormer Mikey Willemse jackalled the ball in some excellent defensive output.

Ruhan Nel would spot an opportunity to intervene in Irish’s play and caught the Exiles on the spot, the centre racing away to dot down under the posts with the newly introduced Sacha Feinberg-Mngomezulu converting.

Feinberg-Mngomezulu would combine with fellow South Africa under-20 talent Hartzenberg with a well-weighted grubber, finding the outside back who finished under contact and the former adding two more to his collection before the break.

Declan Kidney’s men started off the brighter, Stormers sending the restart straight out whilst a Ben White 50:22 bought his team much-needed territory.

Working off the lineout, Irish conceded a penalty for a clearout within inches of the whitewash and half-time replacement Ciaran Parker was red carded, a frustrating sequence with Irish’s afternoon getting a lot more tricky.

Davids would touch down in the goal area after fellow back Dan du Plessis’ kicking moved his side up the park in broken field play, booting ahead for the winger to get his try.

Irish would get on the scoreboard from a catch-and-drive shove, Stormers conceding the game’s second penalty try after being unable to maintain a legal counter to the Exiles’ move.

In a tough afternoon in Brentford, the 13-man Exiles would try to play through the hands but knock-ons would unfortunately be symptomatic of their attempts to advance, often too being met with brutish line speed from the South Africans.

A blocking offence from Damian Willemse on compatriot Janse van Rensburg, Irish building in territory off the set-piece play but Stormers won back the ball on the try line.

Irish saw the lion’s share of the remaining ball in the game, and made it count following Stormers not rolling away as Irish went to the corner once more.

Met with a strong counter maul, Kidney’s boys would work around the fringes until replacement Danilo Fischetti dotted down, Stormers coming close to another score but Nel dropped the ball to deny a brace for the centre.