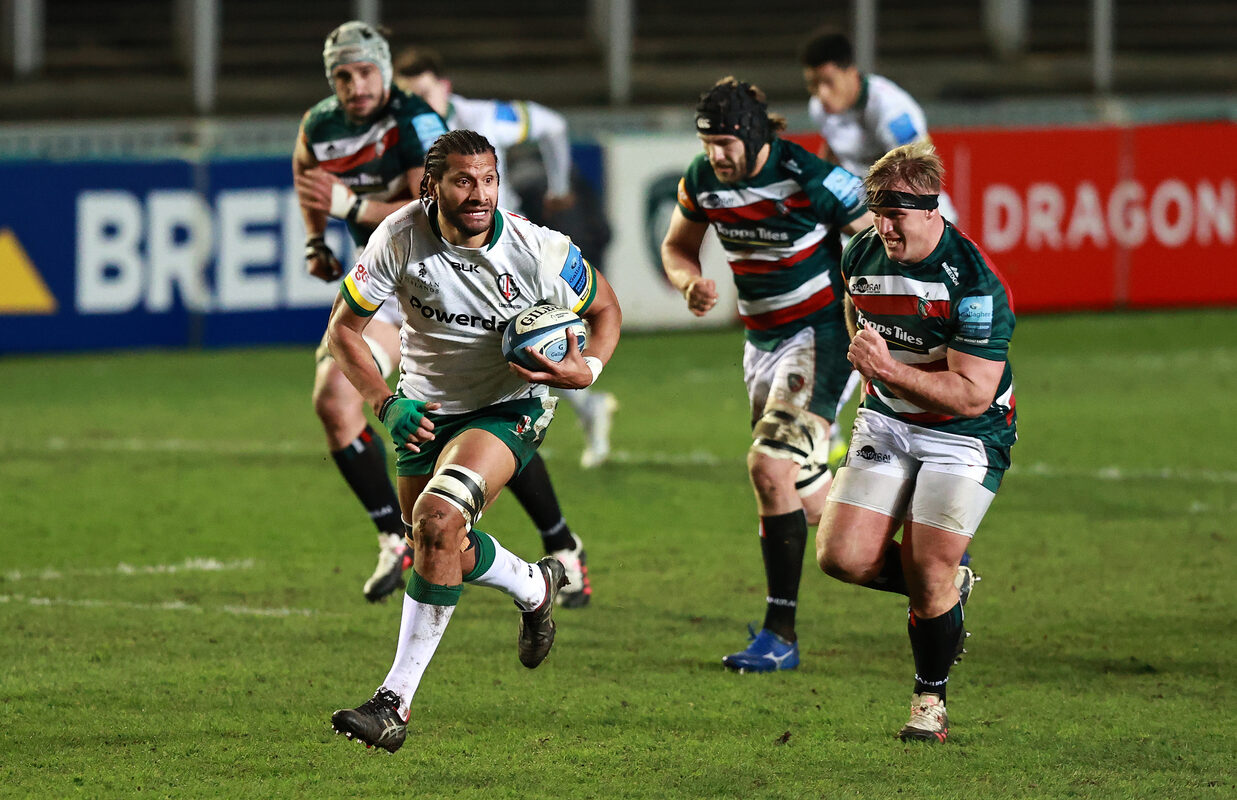 London Irish scored two tries in the final two minutes to secure a losing bonus-point against Leicester Tigers in Round 12 of the Gallagher Premiership on Friday night.

Despite a blistering start, where Irish led inside the first minute, Leicester ran out 33-32 winners, on an evening when the Exiles were forced to play the final 20 minutes with 14 men, following Terrence Hepetema’s red card midway through the second half.

On a bitterly cold evening at the Mattioli Woods Welford Road stadium, Irish came out the traps like a lightning bolt, taking the lead inside 34 seconds!

After Leicester gathered Jackson’s kick-off, Irish turned the ball over. Steve Mafi and Blair Cowan both made good ground and when Hepetema broke through and offloaded the ball to Jackson, the Irish fly-half darted over the try line.

Jackson made no mistake with the subsequent conversion, to hand the Exiles a dream start.

Tigers, to their credit, responded positively and when Matt Rogerson was sent to the sin-bin for a high tackle, Zack Henry narrowed the deficit with a penalty from in front of the posts.

Despite their numerical disadvantage, Jackson had the chance to extend Irish’s lead on nine minutes, only to miss to the left-hand side of the upright – but he made no mistake three minutes later, to make it 10-3 to the visitors.

Irish were playing some exciting, front-foot rugby – constantly asking questions of the Tigers backline, with the effervescent Jackson at the heart of everything positive.

The Exiles were forced into a change midway through the half – Tom Parton hobbling off, replaced by Premiership debutant Will Joseph. The change saw Ben Loader move to full-back, with Joseph replacing him on the right wing.

Soon after, Leicester restored parity – Kobus Van Wyk racing through the Exiles defensive line and dotting down under the posts, before Henry converted to level the scores.

Undeterred, the Exiles were straight back on the front foot – and from another penalty, Jackson kicked the visitors into a 13-10 lead.

It was a nip-and-tuck contest, and Tigers levelled matters shortly before half-time, when Henry stroked home another penalty.

That’s the way it remained until the break – at the end of a topsy-turvy half of rugby.

The hosts came out firing at the start of the second – and they were rewarded inside four minutes, when half-time replacement Ollie Chessum crashed over. Henry adding the extras.

Irish were not about to roll over though and they thought they’d responded immediately through Nick Phipps – only for the officials to rule it out for obstruction earlier in the move.

Two minutes later, the Exiles were dealt a further blow, when Henry stroked over another left-footed penalty, to make it 23-13 to Tigers.

Another TMO decision went against Irish a few minutes later, Will Goodrick-Clarke denied on this occasion – but there was nothing Tigers could do to keep them at bay from the next passage of play, when the visitors worked the ball out wide to Ollie Hassell-Collins, who touched down in the corner.

Irish were reduced to 14 men on the hour, when Hepetema saw red for a high shot on Van Wyk – but Henry’s straightforward penalty chance flew wide.

The hosts did, however, extend their lead on 64 minutes, when replacement Johnny McPhillips kicked Tigers into an eight-point lead.

Making the most of their numerical advantage, Tigers added to their total with a try from Kini Murimurivalu on 67 minutes – to leave Irish with it all to do, trailing 33-18.

Despite being down to 14, it was Irish who scored next – when Jack Van Poortvliet was shown a yellow card and the Exiles were awarded a penalty try in the final minute.

With Irish hunting a bonus point, Tigers were reduced to 13 when Joe Heyes was shown a yellow card for a high tackle on Jackson.

A man up now, Irish’s Matt Cornish got the all-important losing bonus-point try, to ensure the Exiles left the Midlands with two points to show for their efforts, on a night when just about everything that could against them did.