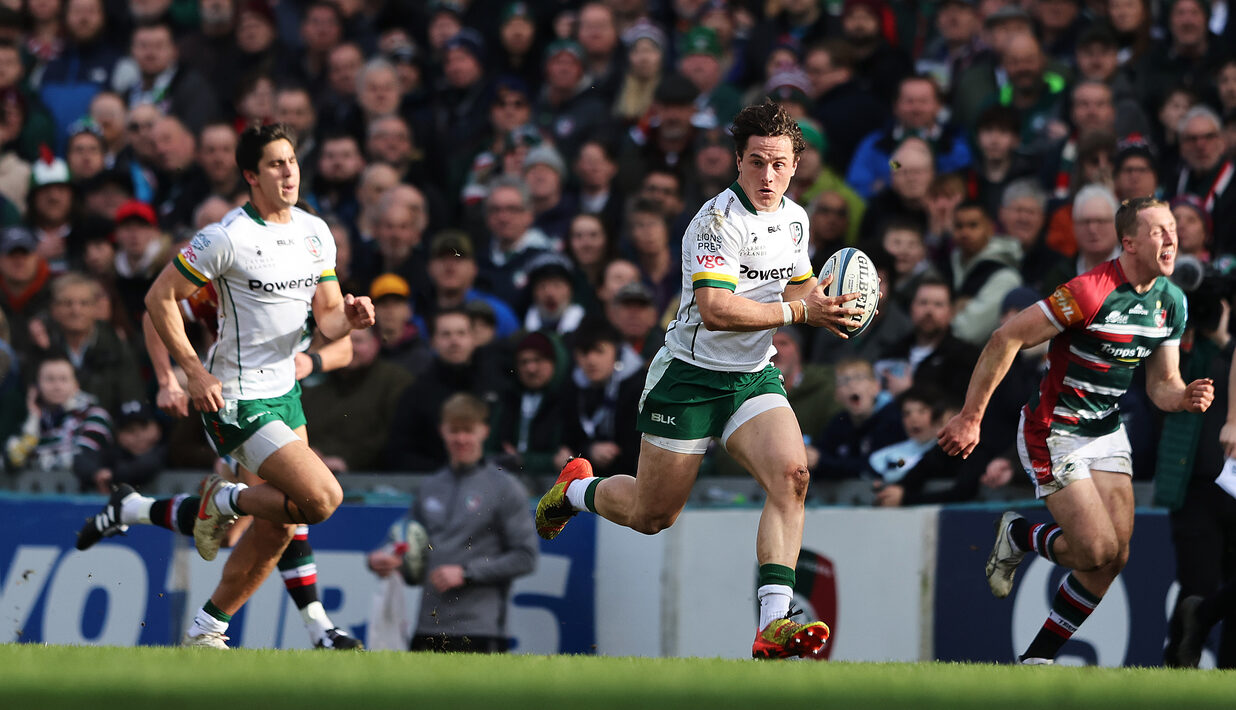 London Irish fell to a 47-28 defeat at the hands of league-leaders Leicester Tigers in Round 20 of the Gallagher Premiership.

One red and one yellow card ultimately proved to be the downfall for the Exiles, as they headed home with no points to show for their efforts.

London Irish were the first to get themselves on the scoreboard. Henry Arundell took an early high ball before sprinting down the touchline. A few phases of hard carrying then followed before Benhard van Rensburg crashed over from short range. Paddy Jackson then added the conversion and Irish led 0-7 with only three minutes on the clock.

It was a game that was predicted to be a mouth-watering contest, and after eight minutes, it was certainly living up to that. Leicester struck back through Nemani Nadolo as the match provided early opportunities for both sides. The winger broke through a tackle to touchdown under the posts. Freddie Burns’ simple conversion was added, and we were all square.

Tigers grabbed the next score thanks to an interception from Matt Scott. The centre padded a pass upwards before regathering the ball to run unopposed over the tryline. The conversion was missed, but the hosts led 12-7.

Irish then showed their attacking prowess with ball-in-hand, and after putting the hosts under pressure in their own 22m, the Exiles were awarded a penalty after Tigers strayed offside. Jackson kicked the resulting penalty through the posts, and Irish cut the deficit to 12-10.

On the half hour mark, the visitors were reduced to 14 men when Curtis Rona was shown a red card for a high tackle.

With the man advantage, Tigers scored their third try of the match. An overlap provided the space and Harry Potter dotted down. The conversion was added, and they moved their lead to 19-10.

To their credit, after a tough few minutes, Irish stuck in the contest. A scrum penalty provided the platform for Jackson to knock another penalty through the posts and keep the Exiles within touching distance.

Referee Karl Dickson then awarded Leicester a penalty try and showed Adam Coleman a yellow card for his part in collapsing a rolling maul. That left the scoreboard showing Leicester leading 26-13.

On the stroke of half-time, Jackson added another penalty, meaning that the hosts led 26-16 at the break.

Like the first half, Irish came out of the blocks quickly! Arundell linked with Ollie Hassell-Collins for a series of well-timed passing exchanges before the fullback sprinted over to score. The conversion from the touchline was missed and the scoreboard read 26-21.

Three tries then followed for Leicester. Tommy Reffell dived on a clever grubber kick through to score Leicester’s next score. Burns added the conversion and they led 33-21.

Nadolo crossed for his second of the game on 58 minutes, taking advantage of that man overlap once again. The conversion was successful, and the lead moved to 40-21.

Chris Ashton was the next try scorer for the home side, biding his time on the wing before walking over in the corner.

Despite this, Irish kept pushing. Matt Cornish forced his way over for a score from the back of a rolling maul and, after Jackson added the conversion, the score was 47-28.

In the dying embers of the match, Nadolo was shown a yellow card for a deliberate knock-on, but that would have no impact on the result. Leicester Tigers secured the 47-28 victory.