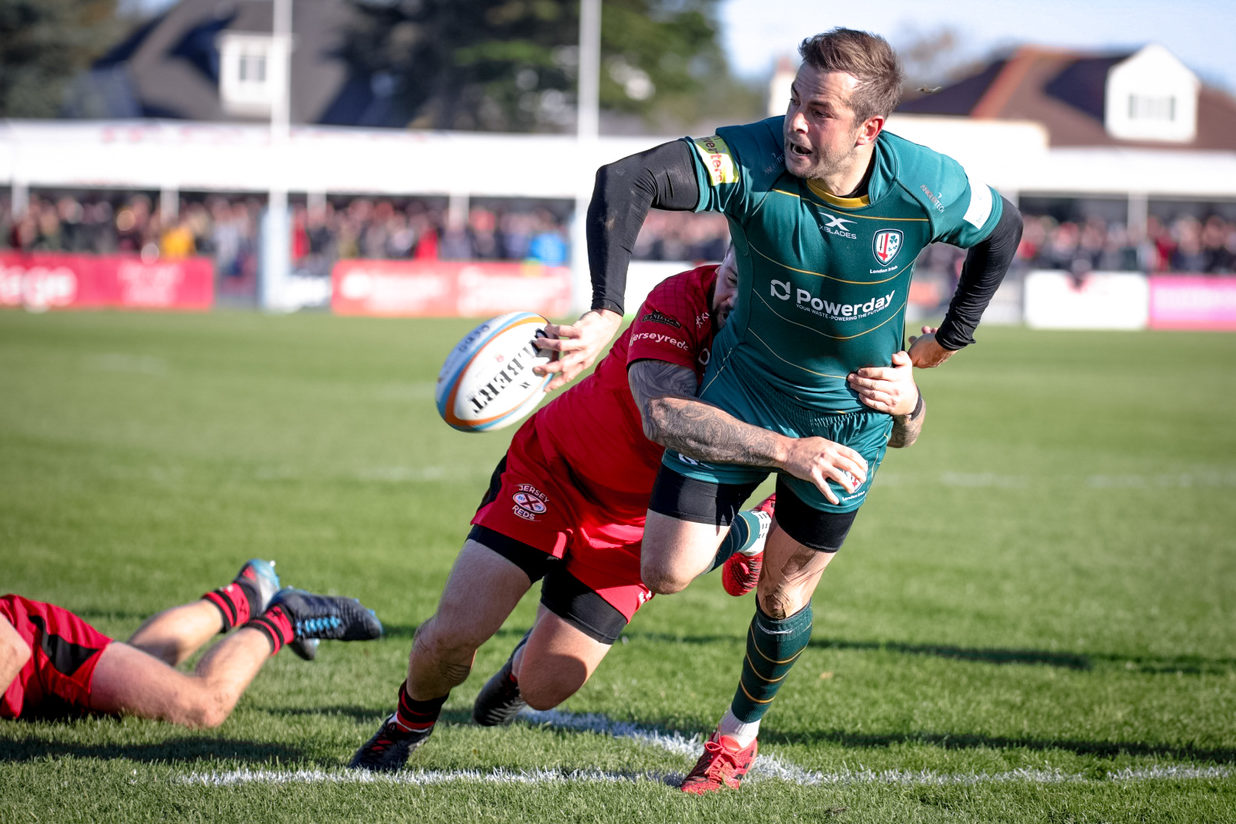 London Irish fell just short of a ninth consecutive win as Jersey Reds grabbed victory with the last play of the match at the St Peter ground.

Tries from Topsy Ojo and Blair Cowan weren’t enough to see the Exiles over the line as Irish picked up a losing bonus-point away from home.

The match started with a host of physical encounters as both sets of forwards fought for the upper hand. As well as a battle between the forwards, a contest of kicking was the theme of the early stages. Both sides looking to the boot to provide themselves with a platform going forward.

On the half hour mark, the hosts were reduced to 14 men as Janco Venter was shown a yellow card by referee Luke Pearce. Venter was deemed to have illegally stopped quick-ball for Irish in a try-scoring opportunity.

It took until 31 minutes to break the deadlock in the form of a Topsy Ojo try. The winger burst along the touchline to dot down in the corner after a clever break from fly-half Stephen Myler. Staying to true form, Myler struck the conversion straight through the uprights to make the score 7-0 to the visitors.

Jersey were undeterred by the Ojo score and the hosts peppered away at the Exiles whitewash. Much to the delight of the travelling support, the Exiles managed to hold strong to deny the Channel Islands side any points heading into the break.

Both sides showed signs of encouraging team talks from the coaches at the break, with a more direct approach taken by the players in the second half.

Irish came out of the blocks quickly after half-time with USA international Bryce Campbell latching onto the kick-off as the visiting side looked to push home their lead.

However, with the visitors inches from the Jersey line, a slight knock-on gave possession back to the home side and Jersey had a chance to show their attacking intent. Playing out from their own line with some clever handling skills, the home side went the length of the field to allow full-back Auguy Slowik to score in the corner and cut the Exiles lead to 7-5. Fly-half Aaron Penberthy was unable to add the extras.

A period of pressure from Jersey followed as they looked to capitalise on their momentum. But, again the Exiles defence resisted, setting up a platform for a counter attack of their own. On 50 minutes, Irish showed attacking flair as they broke through the Jersey line thanks to a blistering run from captain Josh McNally. The Irish skipper provided a neat offload to put flanker Blair Cowan under the posts. Myler slotted the conversion to take the Irish lead to 14-5.

It didn’t take long for the hosts to respond. As the clock hit 56 minutes, Jersey again found their way over the Irish line thanks to some neat footwork to beat the scrambling Exiles defence from winger Leeroy Van Dam. The Exiles lead cut back to 14-10.

With the home crowd in full voice, Jersey once again applied pressure in the Irish half. Camped on the Irish line, the hosts couldn’t make their time on the ball count as the Exiles forced a turnover thanks to a lineout steal from McNally.

On 70 minutes, the Exiles looked to shut the game out as they kicked deep into the Jersey half. But, the home side were quick to regain possession of the ball and regroup.

The Exiles rearguard held firm as they looked to close out the match but, it wasn’t to be. Jersey stayed patient and were rewarded long after the clock had gone red. An overlap in attack allowed for Auguy Slowik to sprint clear and give Jersey a 15-14 lead. Penberthy added the extras to confirm a 17-14 victory for the home side and ensure a sixth consecutive victory for the Reds.