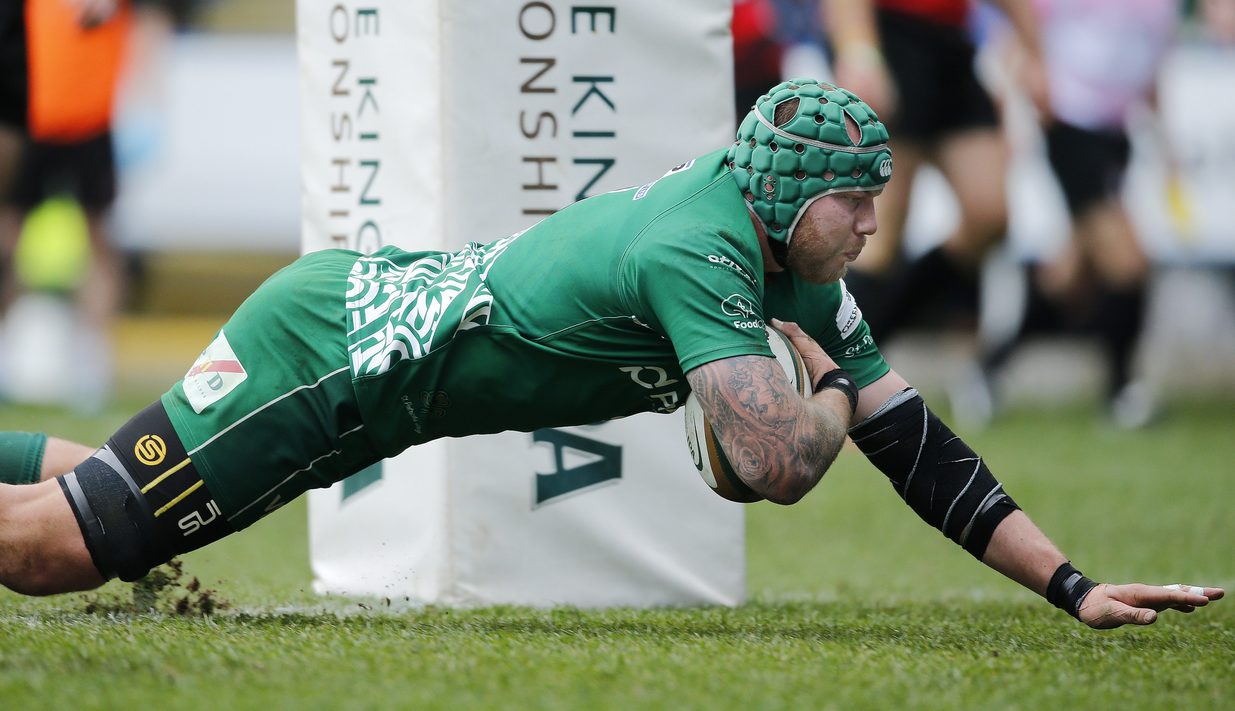 A blistering opening half hour from London Irish put Cornish Pirates to the sword in the annual St Patrick’s Party fixture as Nick Kennedy’s men secured a 39-10 bonus point victory to seal top spot in the Greene King IPA Championship.

Irish’s clinical first half display yielded six tries courtesy of Topsy Ojo, David Paice, Sebastian De Chaves, Ben Ransom (2), and Alex Lewington in front of a regular league Championship record crowd of just under 12,000. Ojo rounded off the scoring three minutes from time as he crossed in the corner to rubber stamp the win.

Racking up their 17th league win on the spin, Irish will play the first leg of their semi-final away on Sunday 30 April against the fourth place team. The return leg at the Madejski Stadium will take place on Saturday 6 May.

Ojo, who is closing in on 400 career points, got the scoring underway  seven minutes into the contest following a sweeping move involving Paice and Lewington. The duo combined effectively to puncture Pirates’ defensive line and get Irish to within inches of the whitewash. Marshall was unable to convert from the touchline, but Irish had the advantage at 5-0.

Irish doubled their tally on 15 minutes through the impressive Paice, who crashed over from close range. The potent Ojo broke clear down the nearside, before offloading to the supporting Marshall who was hauled down five metres from the line. From the base of the ruck, the ball was fired to Paice on the charge, the former England man dotting down to make it 10-0.

Averaging a try every seven minutes, Irish’s third score came midway through the first period thanks to De Chaves. Demonstrating industry up front, prop Danny Hobbs-Awoyemi left a flurry of Pirates defenders in his wake to set the platform for Springbok De Chaves to coast in under the posts. Marshall added the extras to increase the gap to 17-0.

Nick Kennedy’s men were really putting on a show for the Exiles faithful, and on 24 minutes they bagged the bonus point in the shape of Ransom. The ex-Saracens flyer scythed in at the corner for his eighth try of the campaign.

With the contest arguably sewn up, there was no let-up from Irish as they notched up their fifth try of the afternoon on the half hour mark through Lewington. Showing his opposite number a clean pair of heels, the England Saxon crossed for his first try since returning from injury. Five minutes later, Ransom bagged his brace, sprinting 30 metres downfield to touchdown and extend Irish’s lead to 34-0.

Seemingly cruising to victory, the men from Penzance showed character in abundance to notch up two tries in the space of four minutes to reduce the arrears to 34-10. First, back row Jake Parker pounced on a loose ball to cross in the corner, before Alex Dancer stretched over to give Irish’s management team food for thought going into the break.

The second period ebbed away, with the visitors more controlled with ball in hand, but with three minutes left, Ojo dived over in the corner to round off the game emphatically and send the record crowd into raptures.