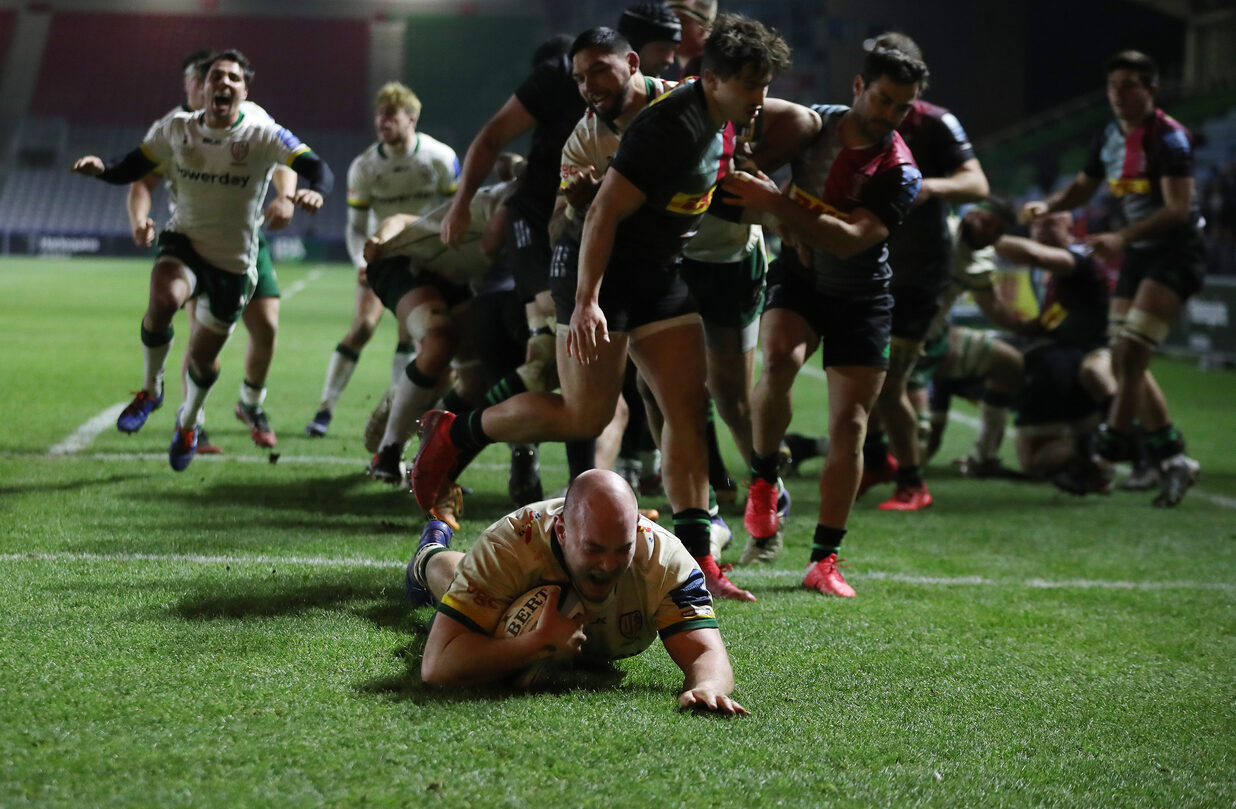 Honours ended even at the end of a pulsating London derby at The Stoop.

On a bitterly cold afternoon in the capital, the final scoreline was 27-27, with Ollie Hoskins – on his 100th outing in an Irish jersey – diving over at the death to clinch a share of the spoils.

Returning to action after an enforced two-week break owing to COVID-19 protocols, Irish were under pressure early on.

Ben Meehan’s huge last-gasp tackle forced Quins skipper Alex Dombrandt into touch inside the opening five minutes – but the hosts weren’t to be denied a few moments later, with Marcus Smith kicking an early penalty from bang in front of the posts.

The Exiles responded positively to falling behind though, with a quickly-taken Meehan penalty getting the visitors up the pitch and into the visitors’ half for the first time.

Soon after, Jackson kicked a penalty deep into the hosts half – and from the next phase of play, Declan Kidney’s side edged into the lead.

After a series of drives forward from the Exiles forwards, it was left to Rona – who else – to crash over from close range, with Paddy Jackson adding the extras.

The match was being played at a relentless pace, and it was Quins who would register the next score of a breathless opening 20 minutes, when Smith – the architect of so many positives attacks from the hosts – dived over in the corner.

The Quins fly-half also added the conversion, to make it 10-7.

It really was an incredible half of rugby – as play continued to ebb and flow from end to end.

Hoskins was denied a try on his 100th appearances for the Exiles when he was adjudged to have knocked the ball on – before Motu Matu’u was thwarted on the hosts’ try-line from the next phase of play.

Unfortunately, after those two near-misses, Quins were next to get on the scoreboard – Mike Brown picking up from a yard out and bundling the ball over under the posts, with Smith adding the conversion.

Irish enjoyed a period of sustained possession deep in Quins territory as the half neared its conclusion – and it paid dividends 90 seconds before the break.

Matu’u wasn’t to be denied on this occasion, spinning off the maul from his own lineout to dive over and narrow the gap to five at the half.

Despite temperatures dropping to below zero at the start of the second period, the intensity on the pitch remained at a high level.

Tom Parton’s sensational catch and run saw him denied at the last with the try-line at his mercy, before Irish rang the changes, with Billy Meakes, Nick Phipps and Agustin Creevy entering the fray.

Smith maintained his 100 per-cent record with the boot with another penalty on 49 minutes, as Quins stretched their lead to eight.

From the kick-off, however, it was back to a five-point game, as Jackson stroked home to reduce the gap.

The next score was always going to be crucial – and unfortunately for Irish, it went the way of the hosts.

Scott Steele darted over from close range, with Smith adding the extra two points, to give Quins a 12-point buffer.

Soon after, Quins replacement Archie White was shown a yellow card for a deliberate knock-on – and the visitors made their numerical advantage count within a minute.

Albert Tuisue galloped on to Meakes’ off-load, beat one man and bundled the ball down – but Jackson’s conversion flew just wide.

With Quins back to their full quota, Irish scored again two minutes from time, Hoskins – finally – got the try his performance deserved on his 100th appearance, with Jackson kicking the conversion to draw the Exiles level.

Then, with the final kick of the contest, Jackson – from bang on halfway – had a chance to win it for Irish, but the kick fell wide.

It was an incredible game of rugby – a fitting way to start the New Year, a year which we all hope promises so much after a forgettable 2020.