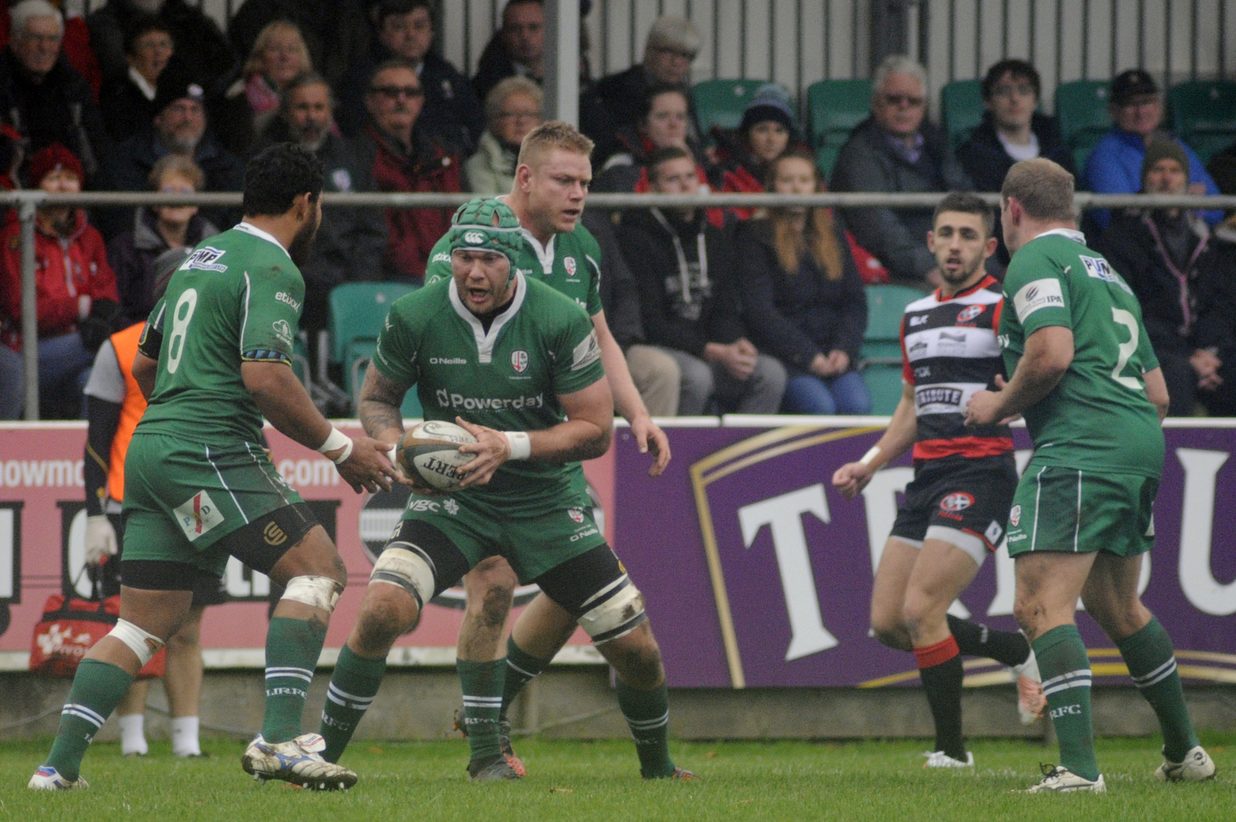 London Irish recorded yet another bonus-point victory, this time at Cornish Pirates as they made it nine wins out of nine in the Greene King IPA Championship.

A brace apiece from Ben Franks and Ben Ransom, coupled with Max Northcote-Green’s score ensured the Exiles left Penzance with maximum points to push home their supremacy at the top of the table.

Arguably the Exiles toughest examination of the season to date, Nick Kennedy’s men had to be relentless throughout the contest to secure the spoils.

After Greig Tonks’ ninth minute penalty, Ransom crossed for the opening try of the game, collecting James Marshall’s neat cross-field kick to score. Tonks was unable to convert from the touchline, but Irish led 8-0 with 18 minutes played.

The hosts to their credit immediately hit back by virtue of an Alex Day converted try to go within a point of the Exiles. Working through their phases, concerted pressure from the Pirates set the platform for Day to snipe his way to the line.

After converting Day’s score, Will Cargill edged the Pirates ahead with a penalty to make it 10-8, a lead that lasted only two minutes. Tonks saw to that as he kicked a penalty following an infringement at the ruck.

With the home side struggling to cope with Irish’s attacking intent, the Pirates conceded a series of penalties resulting in the visitors’ second try of the afternoon courtesy of Franks. Rob Elloway was sin-binned for a professional foul and from the subsequent lineout, a catch and drive enabled Franks to burrow his way over the whitewash. Tonks skewed his conversion wide, but Irish had the advantage at 16-10 going into the break.

Four minutes into the second period Franks picked up from where he left off in the first half, the former All Black crashing over after a dominant passage of play. Puncturing holes up front, Irish got their reward from a driving lineout after forcing a penalty close to the Pirates’ line.

Northcote-Green extended Irish’s lead on 51 minutes, the in-form flanker finishing off a sweeping attacking move to cross in the corner as secure the bonus-point. On the hour mark, Ransom bagged his second of the day, showing the Pirates’ defence a clean pair of heels to sprint half the length of the field and cross under the posts. Marshall’s chip kick and Fergus Mulchrone’s inch-perfect pass provided Ransom with the ammunition to score.

Seemingly coasting to victory at 35-10 with 15 minutes to go, Irish conceded two late tries courtesy of Sam Simmonds to close the gap to 35-24 as they threatened to snatch a bonus-point. However, despite losing Harry Elrington to the sin-bin, Irish saw out the remainder of the game and leave the Mennaye Field with a 35-24 triumph.

The Exiles’ next home game is against Jersey Reds on Sunday 27th November (kick-off 2pm) with tickets available by calling 0118 968 1016 or by clicking here.

Hospitality packages are still available for the Jersey fixture, starting at just £35 +vat per person. For more information or to buy a package please email [email protected] or call 01932 750 113.