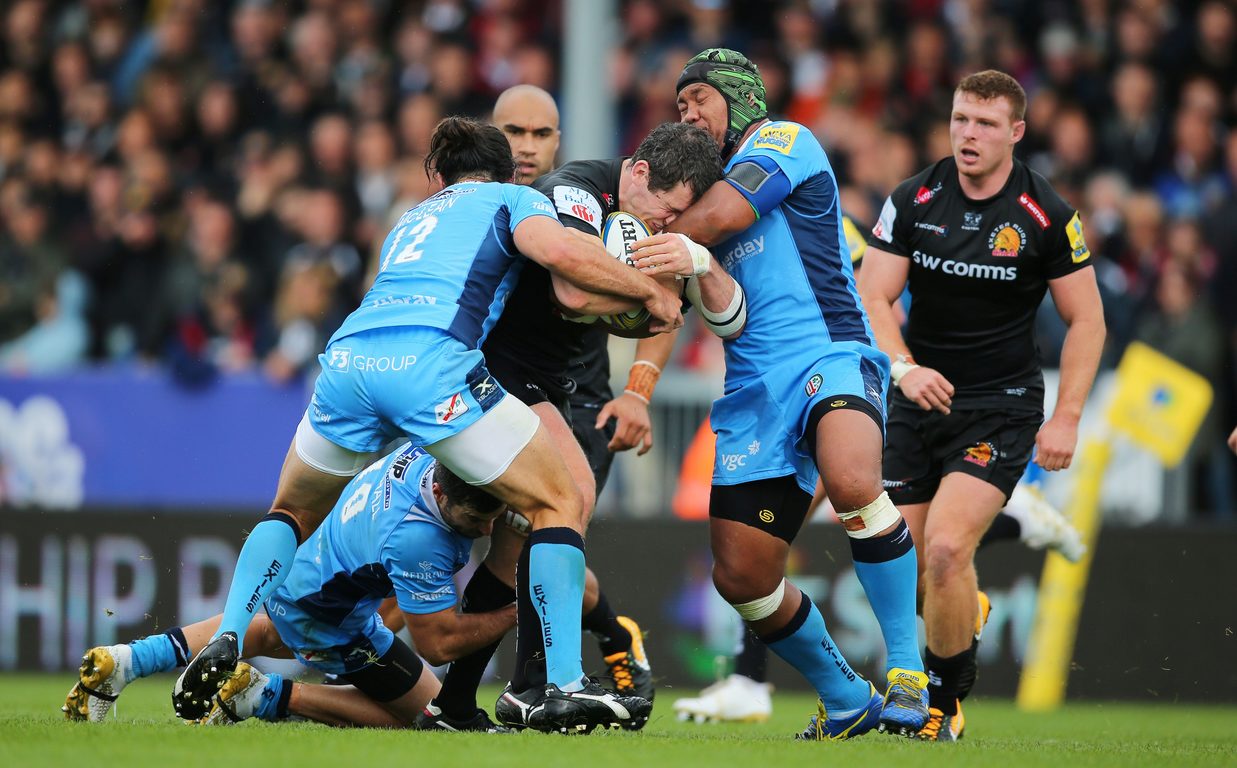 London Irish succumbed to a 37-7 defeat at the hands of reigning Aviva Premiership champions Exeter Chiefs at Sandy Park.

A penalty try coupled with further scores from Don Armand (2), Olly Woodburn and Henry Slade secured a bonus point triumph for the Devon outfit, who got back to winning ways following their opening day defeat at Gloucester.

The Exiles’ solitary try came in the shape of a 72nd minute score from Alex Lewington, the winger demonstrating excellent footwork to cross in the corner.

Nick Kennedy’s men had to endure a barrage of pressure for the duration of the first half, Chiefs purring with every attack.

After Gareth Steenson had put the hosts in front with an eighth minute penalty, centre Slade crossed for the first try of the game to extend Exeter’s lead. Steenson was the provider, breaking clear of the Exiles’ backline before offloading to the supporting Slade. Steenson uncharacteristically skewed the conversion wide from kickable range, but Rob Baxter’s men were in the ascendancy at 8-0.

Irish conjured up their first clear-cut opportunity through James Marshall on 19 minutes, the Kiwi centre fending off a string of defenders only for the attack to be halted by a scrambling Exeter rearguard.

Chiefs doubled their tally of tries for the afternoon on 26 minutes, referee Craig Maxwell-Keys awarding a penalty try following a dominant driving lineout. The Sandy Park outfit were causing Irish’s backline no end of trouble with Jack Nowell and Woodburn threatening further scores in the minutes that immediately followed.

With half-time looming, Exeter extended their lead to 20-0 by virtue of openside flanker Don Armand, who used the greasy surface to good effect as he slid over in the corner. The Exeter heavies set the platform with a flurry of drives towards Irish’s line.

Irish came out for the second period in positive mood and enjoyed a lion share of possession, but handling errors led to missed chances.

Steenson increased Chiefs’ advantage to 23-0 courtesy of the boot five minutes into the second half after Irish were penalised for a high tackle.

On 49 minutes Irish went within a fingertip of scoring a try of their own when Lewington’s neat kick-through on the near side was very nearly pounced on by the onrushing Tommy Bell. However, excellent wing play from Woodburn ensured the ball was palmed dead in goal with the try line beckoning for Bell.

The visitors kept plugging away despite the deficit, and with eight minutes remaining Lewington dived over in the corner to give the travelling Exiles supporters something to cheer. Replacement scrum-half Brendan McKibbin peeled off the base of a maul to feed Lewington on the blindside.

Looking to salvage a losing bonus point from the game, Irish were hit with a sucker-punch when McKibbin’s looping pass was intercepted by Woodburn inside his own 22 with the winger sprinting clear to seal the bonus point. Steenson’s conversion made it 30-7.

Exeter back row Armand added further gloss to the scoreline, as he crashed over from close range to bag his brace for the afternoon. Steenson added the extras from directly in front of the posts to end the game 37-7.

London Irish’s next home games are against Northampton Saints on Sunday 24 September and Leicester Tigers on Saturday 7 October. Adult tickets from £23 and U13s from £3 from www.lidirect.co.uk or call 0118 968 1016.