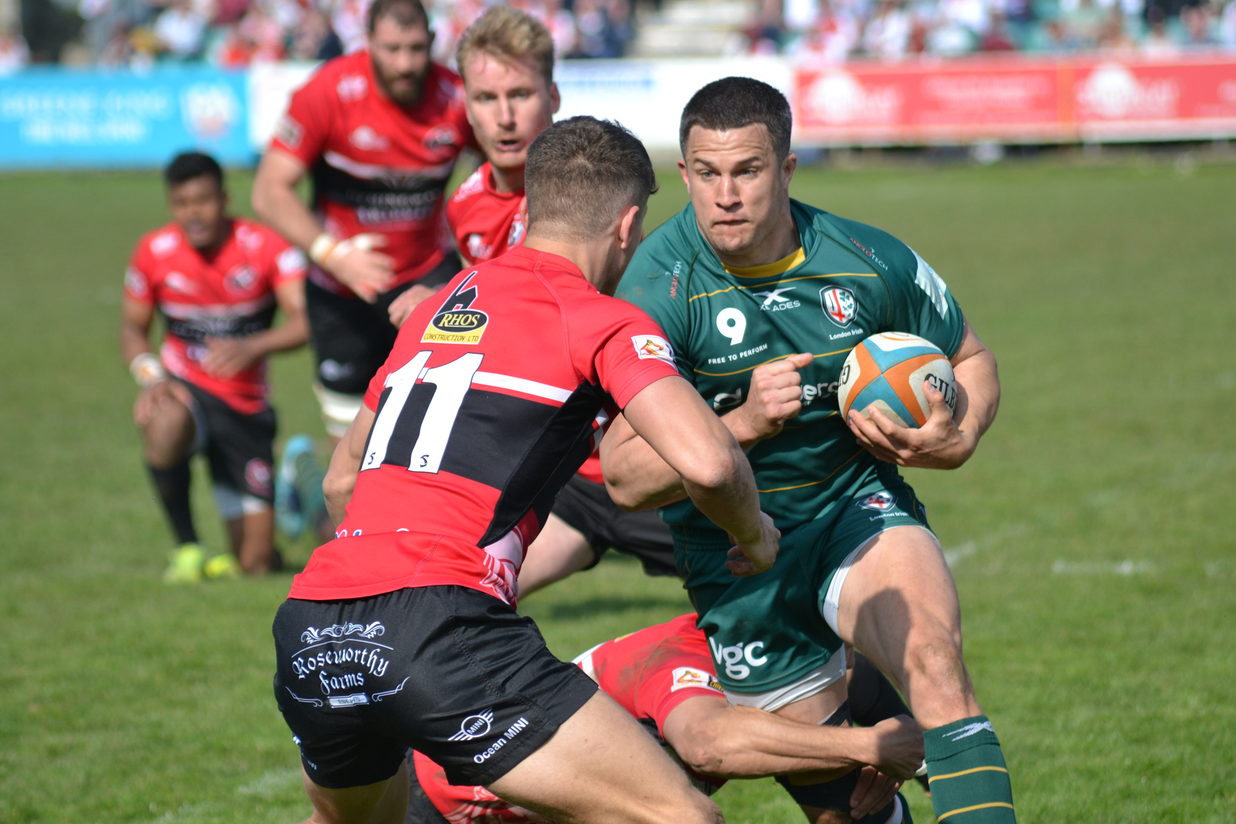 London Irish regained their away winning record with a strong five-try win over Cornish Pirates in Penzance.

When the teams had met at the Mennaye in the Championship Cup before Christmas the Exiles had struggled to get going against an oppressive Pirates defensive effort.

This time around the effort was just as determined from the hosts, but the spring sunshine and firm pitch were much more to London Irish’s liking, who dominated throughout.

After an opening 10 minutes which saw the teams sizing each other up Irish took control with a pair of tries for Tom Stephenson in the space of five minutes.

For the first Stephenson found himself on the end of an overlap before selling a dummy to crash over, while the second owed plenty to Dave Porecki’s stepping ability which created the space for the centre to glide in between the sticks to dot down unopposed.

Stephenson was the beneficiary of some good all-round approach play, as was Ben Meehan four minutes from half-time.

Alivereti Veitokani was looking dangerous every time he got the ball in hand, and his offload to Ben Loader sparked a move which ended with Meehan over the line. Ian Keatley sent Luke McLean through a gap, and with the scrum-half in support the score was a formality.

While they had been good in the first half Irish needed to keep it going in the second, and they got the bonus point four minutes after the resumption of play. This one was a solo effort from Loader, who collected a clearance kick before brushing off two attempted tackles to dot down between the sticks.

As impressive as the attacking had been, just as eye-catching was the Irish defence.

In the first half they had repelled some potent-looking drives to keep the line intact, and as the hour approached it looked as if the same would be the case at the other end. Indeed, when a good few phases of defence were rewarded with a turnover it looked like the hard work would be rewarded again with a long clearance upfield.

Sam Matavesi had other ideas, the hooker intercepting a pass to go over for a close-range try which brought the Mennaye faithful to life.

Matavesi’s try also galvanised his team mates, and from the kick off they were back in the Irish 22. Maliq Holden made the initial break, finding Robin Wedlake on the outside. The defence scrambled, but while repeated penalties were conceded the line held firm, and when AJ Cant fumbled Irish had both a scrum and then a penalty and Keatley sent play to the 10-metre line.

With seven minutes remaining in normal time any thought of a Pirates comeback was extinguished by Meehan’s second of the day. A lineout was won close to halfway, the ball came quickly off the top and Stephenson’s pace took him through the defence. The centre then kept his cool to draw the final man and send Meehan over between the uprights.

Keatley maintained his 100 percent record off the tee, and while there were still a few minutes of action to enjoy the job was done and Irish will head into the two-week break still clear at the top of the Championship table.