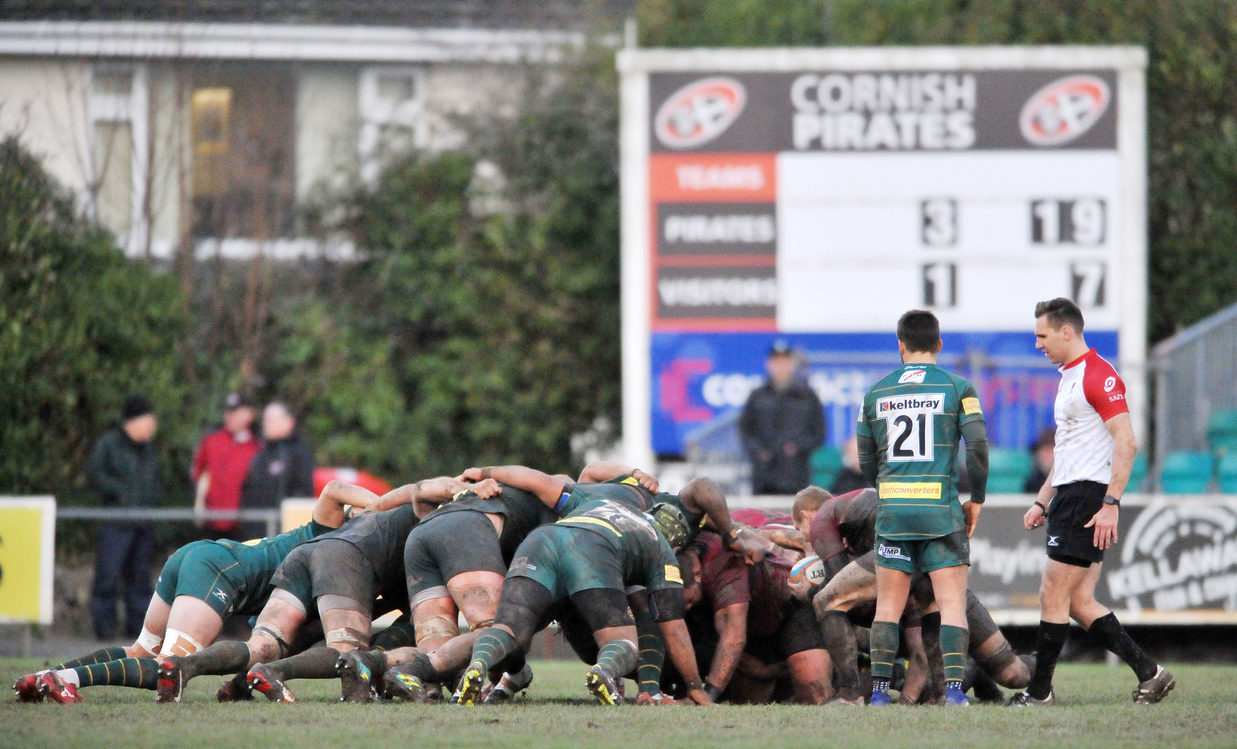 London Irish’s 100 percent record in the Championship Cup was ended by a full-blooded performance from Cornish Pirates in Penzance.

One virtue of playing in the farthest south-west corner of England was that the rain that battered the rest of the country on Saturday afternoon had blown over the Mennaye by the time the match kicked off at 2pm.

But even so the pitch had taken a beating and with patches of standing water stubbornly refusing to shift and mud becoming an increasing feature of the playing surface during the warm-ups 80 minutes of running rugby looked a distant possibility, especially with a strong end-to-end wind staying firmly in situ.

So it was refreshing not just to see both teams look to keep the ball alive while also respecting the conditions, but also serve up an entertaining match.

Pirates opened the scoring in the fifth minute with a well-constructed try.

It had been no surprise to see each back three be tested with repeated high kicks, and it was to their credit that they were all dealt with well. So the hosts kept the ball in hand, and while Matt Williams did superbly to bring down a rampaging Jack Andrew on the wing Pirates retained possession and Kyle Moyle slid over in the right corner.

The heavens celebrated the try with a sudden heavy shower, but while this soon passed over the wind remained, so much so that when Irish were awarded a penalty in the middle of the field they opted for a scrum rather than have the ball.

But when Pirates infringed again in the next attack Stephen Myler went for the corner, and with the pack shifting the drive away from the attempted sack and motoring for the line a tying score looked inevitable.

The home pack did regather themselves to slow things down, but Williams ensured that his forwards’ efforts were not in vain by coming off his wing to score near the posts, powering over an attempted tackle in the process.

Myler’s conversion put the Exiles in front, but a penalty conceded on halfway by the visitors was sent to the five-metre line, a position from which Andrew eventually drove over by the posts.

Will Cargill added the extras to increase the lead to five, but missed a penalty a couple of minutes later that would have put the Pirates two scores up.

Meanwhile the Exiles’ best series of phases came just before the half-hour, the forwards coming around the corner at pace and both Tom Fowlie and Brendan Macken making some good metres out wide.

Pirates had a couple more attacks themselves, but neither side was able to add to their respective scorelines before the break and the main question in the stands during half-time was whether a five-point lead was going to be enough for the hosts going into the wind.

However when five became 12 thanks to Tom Duncan and Cargill 11 minutes into the second half Pirates were sniffing the win that would have confirmed second place in the pool. Scoring a third try certainly justified repeated penalties inside the Exiles’ 22 to the corner and meant that as the final quarter approached the visitors were going to have to pull something out of the bag to head home with the four points.

Some Brendan McKibbin initiative did spark Irish momentarily into life, first showing great awareness to pull Alex O’Meara’s foot into touch, then timing his tackle on Alex Day to perfection to force a fumble and the scrum it brought some 30 metres out.

But the Pirates’ rearguard was superb, staying firmly in the visitors’ faces to deny them time and space. The errors this brought were compounded by Blair Cowan’s red card for a late and dangerous tackle 10 minutes from time, but when Williams broke through a couple of defenders to scorch up the left wing the try Irish needed looked odds-on, especially with one man to beat and a supporting runner on the outside.

However, the ball hit the deck, Pirates had the scrum, and despite Irish putting themselves into a couple more promising positions the hosts had done enough and ran the clock out.