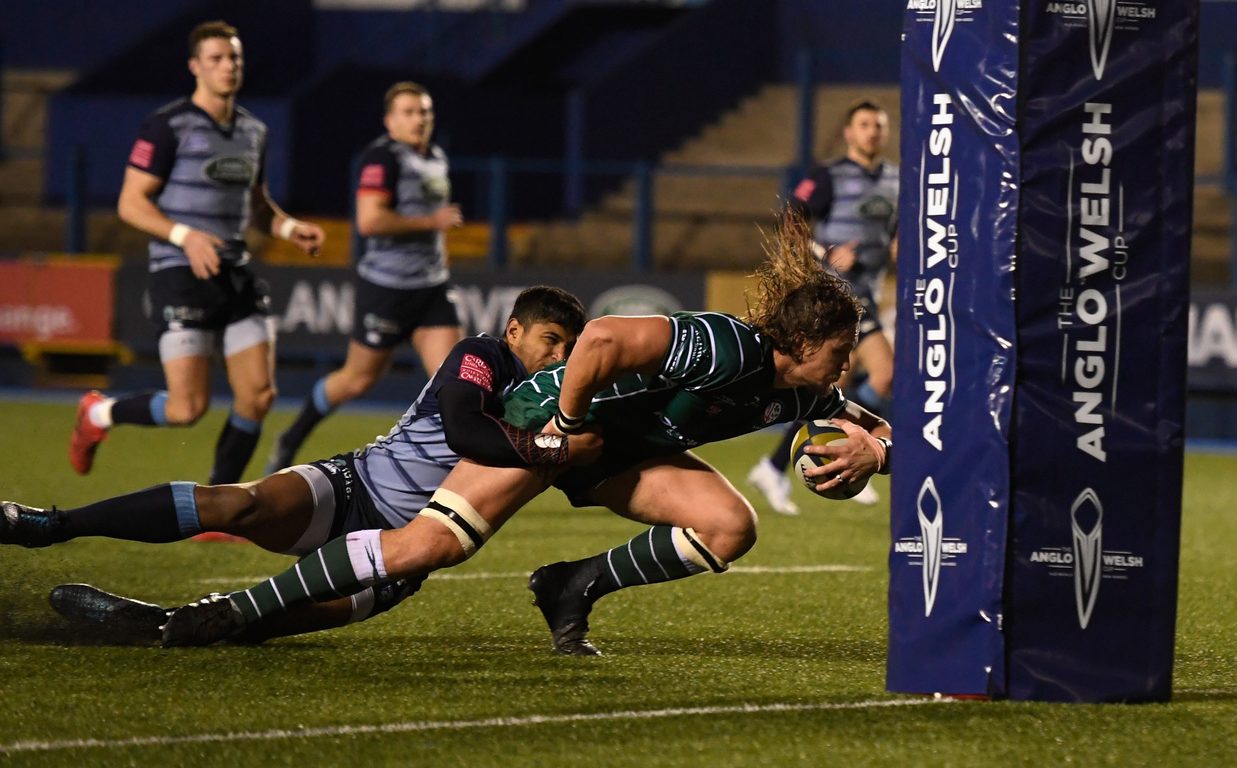 London Irish recorded their fourth win in a row with a 42-21 bonus point victory at Cardiff Blues in the Anglo-Welsh Cup.

Tries from Alex Lewington, Arno Botha, Tom Fowlie, Joe Cokanasiga and a brace from Ofisa Treviranus overpowered the Pro14 side as thoughts now turn to next Saturday’s Aviva Premiership clash against Sale Sharks at the Madejski Stadium. Irish have done all they can to secure a semi-final spot but must hope that both Leicester Tigers and Newcastle Falcons fail to win their respective fixtures.

The Exiles looked sharp in the attacking stakes, new recruits Arno Botha and Piet van Zyl dangerous every time they had ball in hand. Botha played the full 80 minutes of the contest and scored Irish’s third try just before the break, his first in a green jersey after Lewington and Treviranus had touched down earlier.

Lewington crossed the whitewash on 10 minutes, collecting Theo Brophy Clews’ inch perfect cross-field kick to dot down in the corner. Marshall’s conversion gave the visitors the early advantage at 0-7.

Five minutes later, Cardiff were on level terms, outside centre Aled Summerhill motoring his way through the heart of Irish’s defensive line for a converted score.

Irish, resilient immediately from the restart, were back in front on 21 minutes when Treviranus crashed over for the first of his double. Marshall elected to kick a penalty into the corner and from the subsequent lineout Irish worked through the phases, with the giant Samoan going over.

7-14 ahead following Marshall’s conversion, the Welsh outfit restored parity on the half hour mark through Seb Davies who fended off Cokanasiga on his way to the line. Prior to Cardiff’s second try, Max Northcote-Green went agonisingly close to increasing Irish’s lead only to fumble van Zyl’s offload just a whisker from the line.

With the score poised at 14 apiece with half-time looming, the impressive Botha went in under the posts at pace to give his side a 14-21 interval lead. Like the first, Irish began the second period in emphatic fashion with Treviranus scoring his second try on 45 minutes. Botha was influential, forcing a Cardiff defender behind his own line to earn a five metre scrum and Treviranus did the rest from the back of the put-in. Marshall’s radar boot made gave Irish some breathing space at 14-28.

The men in green continued to play with intensity, Franco van der Merwe underlining his value to the team with a 35 metre line-break on 50 minutes to set up an attack which was thwarted by a scrambling Blues rearguard.

With just two converted scores between the two sides going into the final 20 minutes, Cardiff were throwing everything at Irish’s defence. However, Irish held firm and were rewarded for their endeavour when Fowlie supported Botha’s barnstorming break to cross under the sticks.

Despite Cardiff’s Corey Domachowski burrowing his way over the line to reduce the arears on 72 minutes, Irish pushed home their superiority through a clinical Cokanasiga score. The strapping wing stretched over the line after great work in attack from Johnny Williams. Marshall made it seven out of seven with the boot to end the game 42-21 to Irish.