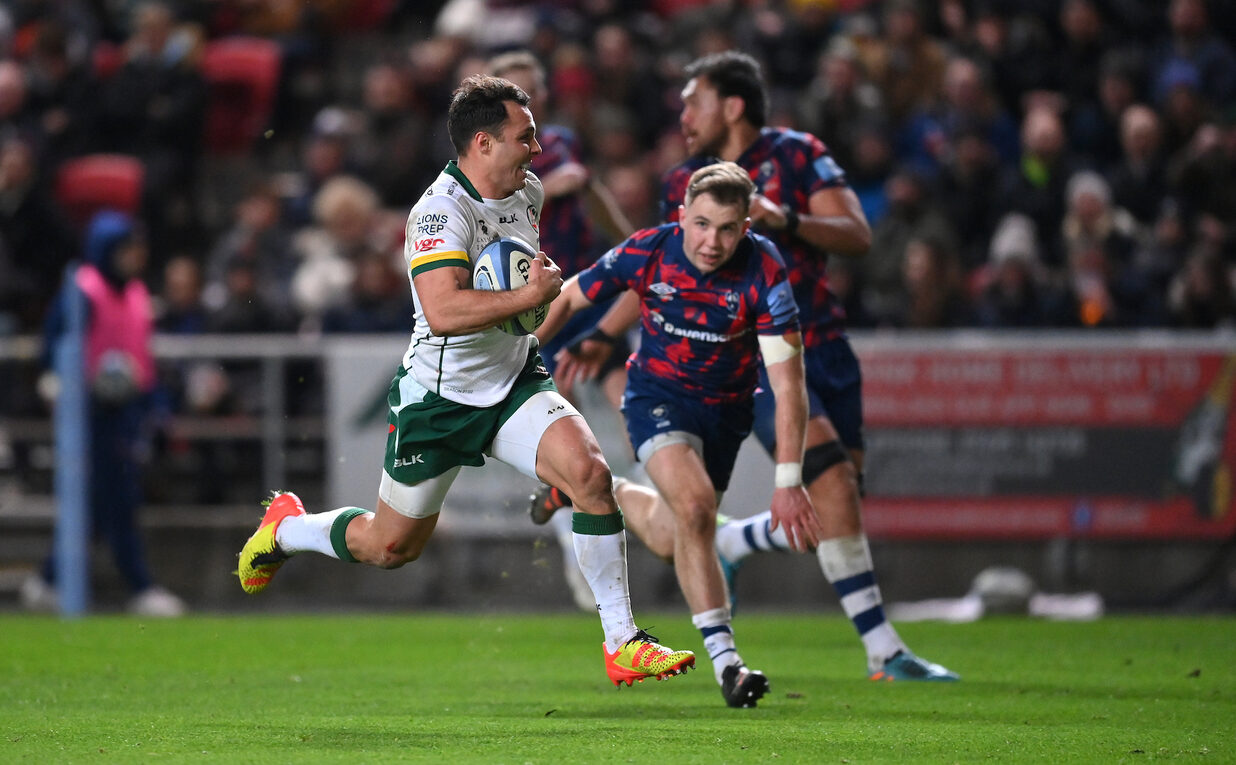 London Irish produced a stunning second half display to blow away Bristol Bears on Friday evening.

The Exiles scored six tries – five of which arrived in a sensational second half – as Declan Kidney’s side won 49-32 on a night to remember at Ashton Gate.

On a bitterly cold evening, Irish were penalised early on for offside, presenting Tom Whiteley with a straightforward third minute penalty which he duly kicked through the middle of the posts to hand the hosts a 3-0 lead.

The Exiles didn’t have to wait long to be presented with the chance to level the scores, however – Paddy Jackson slotting home a 30-metre penalty to make it 3-3.

The next passage of the game was closely fought, but it was Bears who scored next on 16 minutes, when a break down the short side on the right flank ended with Whiteley crossing the whitewash out wide.

Irish were by no means second best though, and – after a period of sustained pressure deep in the Bears half – skipper Nick Phipps crashed over from close range.

Jackson added the extras, to make it 10-8 to the Exiles with a quarter of an hour of the half remaining.

Bristol regained the lead eight minutes before the break, breaking from deep inside their own half and recycling the ball out wide, creating space for Siva Naulago to dot down.

Whiteley added two more, as the hosts edged into a five-point lead.

Irish were reduced to 14 men a minute before half-time, when Agustin Creevy was shown a yellow card – and that proved to be the last pivotal moment of the half, as the Exiles headed back to the dressing room trailing 15-10.

Despite their numerical disadvantage, Irish would get the next points of the contest three minutes into the second half – Jackson kicking a penalty to reduce the arrears.

Back to their full complement – and with Messrs Pearson, Rona and Rowe now in the thick of the action – Irish scored their second try of the evening on 53 minutes.

A swift backs move resulted in Benhard van Rensburg sliding over in the corner for a well-worked team try. Jackson added the extras with a stunning kick from touch.

Joy turned to elation moments later, when another fine break from van Rensburg created the space for an offload to Phipps, who was left with the simplest of tasks to dot down his second try of the evening.

Jackson made no mistake, as Irish moved into a 12-point lead.

Bristol’s second half went from bad to worse shortly before the hour mark, when Naulago was given his marching orders for a high tackle on Henry Arundell.

Irish were enjoying a second half to remember and it got even better on 62 minutes – Ben Loader gifted time and space out wide to cross over, as the visitors extended their advantage to 17 points.

Remarkably, the Exiles were at it again four minutes later – Jackson this time crossing over, for a fourth try in 13 incredible minutes, before adding two more with the boot to make it 39-15!

Everything Irish touched turned to gold and Jackson in particular was having a flawless night – adding a penalty from halfway to increase the advantage further.

It got even better for Kidney’s men seven minutes from time, as Tom Pearson – buoyed by his time in the England camp earlier in the week – added another, with Jackson kicking the extras.

Bristol, to their credit, scored three late tries, courtesy of Theo Strang, Ashley Challenger and Jake Kerr, but even that failed to take the gloss off a night to remember for London Irish, who headed back to the capital celebrating a famous win.