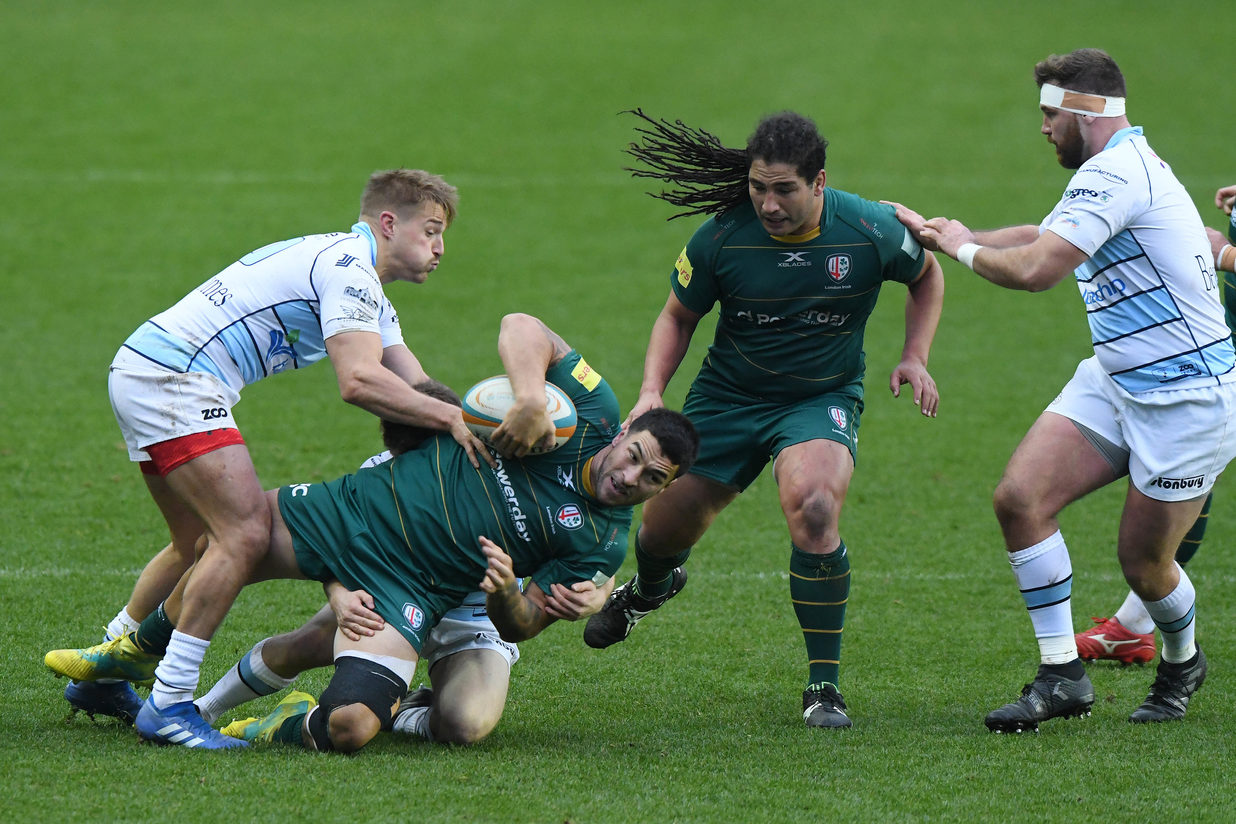 London Irish consolidated their place at the top of the Championship table with one of the most crucial results of the season, a rare away bonus point win at Goldington Road.

Going into the game Bedford had only lost once at home in the league, way back in September, and had seen off Ealing Trailfinders in mid-January.

The Exiles got off to a positive start, Josh McNally winning a Jacob Atkins high kick on halfway to set up the first serious attack with only a couple of minutes on the clock.

Terrence Hepetema sent through a nicely placed grubber for Ben Loader to collect, and while the winger found the supporting Jake Schatz on his inside home winger Ryan Hutler was alive to the danger and pulled the number eight down from behind.

Back again came the visitors, working their way into the home 22 before an Atkins grubber was cleaned up by Rich Lane.

Tom Stephenson made a couple of eye-catching breaks, and there was plenty of heavy-duty ball carrying being shared by the forwards.

But despite all the dominance from the men in green it was Bedford who got the first points. Irish had got themselves back into the home red zone and were building nicely, only for an Atkins pass to get intercepted by Jake Sharp, who headed upfield. Loader took off in chase, but was powerless to stop the supporting Hutler going over by the posts.

If this prompted any loss of confidence from Atkins it did not show, as within two minutes he had made the break to get his team level. Swerving hips and sidesteps took him past the initial line, and with Brendan Macken – a late replacement for Matt Williams in the starting lineup – in support the score was a formality.

A third try of the match looked odds on before the end of the opening quarter when the livewire Rich Lane lived up to his reputation as one of the Championship’s most dangerous runners by turning on the afterburners inside his own 22 and scything 50 metres upfield. Pat Tapley was on his shoulder and with defenders running out all the winger had to do was hold onto the pass.

He did not, and while Sharp would edge Bedford back in front with a penalty it was a huge let-off for Irish given what it followed.

Sharp landed a second four minutes later, utilising the strong wind at his back to nail a three-pointer from over 40 metres, and now that they were six points down Irish were lacking that little bit of composure they had had in the opening salvos, with balls hitting the deck and play being a bit too forced.

This was compounded by Ollie Hoskins for seeing yellow on 27 minutes, Sharp adding a third penalty and Atkins sending the subsequent kick off out on the full.

So it was to their credit that Irish not only re-gathered themselves during the next 10 minutes but also got the next score they needed.

Back into the hosts’ 22 with a scrum, Ollie Hassell-Collins – on for Loader – cut a short inside line off Atkins to get over the gain line. TJ Ioane was altogether more direct next up, and after the forwards inched their way to the line Scott Steele went over to end the half with Irish still trailing, but only by four points.

Turning around with the wind now at their backs Irish spent the opening three minutes working their way all the way to the Blues’ five-metre line, mixing the point of attack nicely between forwards and backs.

The attack only came to an end with a desperate tackle on Atkins which forced the ball forward, and with Bedford winning a penalty at the scrum they were able to clear to the 22.

But a stolen lineout got Irish going once again, and after repeatedly flooding the right-hand side of rucks with runners the Bedford line was fractured by Stephenson. McNally fed Hassell-Collins, whose return inside ball to the captain was agonizingly just off target.

Bedford made a break from the scrum, but two crucial interventions from Atkins, first winning a turnover at a tackle then sending a neat chip to the corner, was followed by some good maul defence from the forwards which earned them a scrum five metres out.

A penalty was sent to the corner, but for all the pressure it was points that Irish needed. And 10 minutes into the half that was exactly what they got, Hepetema showing good dexterity to keep hold of the ball after Steele had been tackled close to the line.

Still it was only a three-point lead and Bedford had barely touched the ball, and as the contest entered its final quarter the Blues got some wind in their sails.

Lewis Robling was put through a gap by Charlie Clare, the centre only snared by an outstanding last-ditch effort from Albert Tuisue. And when Sharp sent a penalty to the corner the home pack put together a solid maul.

But they could not find a way through the green line, and when two penalties were awarded in quick succession Atkins sent play all the way to the home five-metre line. This time it only took one passage of play for position to be turned into points, Ofisa Treviranus dotting down from close range.

This not only saw Irish secure at least a bonus point but also put them two scores in front for the first time.

It was needed, too, with Robling going over with six minutes to play to finish off Matt Worley’s break. But when Atkins sent a penalty to the corner Irish’s forwards kept things tight and controlled to see out the win.