As they had at the Madejski Stadium six days previously, Bedford got off to a flying start, Lewis Robling nailing a third-minute penalty. But it was the hosts’ offloading game – which had caught the eye in Reading – which quickly did the same on their own turf.

Ed Coulson took advantage of a low tackle to get the to Rich Lane, and when the full-back stepped off his left to wrong-foot the Exiles’ line his sudden burst of acceleration took him into the visitors’ half.

Backs and forwards were in support and when a penalty was awarded home captain Lee Dickson had no hesitation in pointing to the corner. The tactic paid off, too, Huw Worthington going over the whitewash for the try, and while Robling missed the conversion Irish were nevertheless two scores down without having had the ball in a meaningful possession.

This soon changed, Stephen Myler sending a penalty up the hill to the five-metre line, which began a spell of concerted pressure from the Irish.

While this did bring a try for winger Ben Loader it did look for a fair few minutes that Bedford were going to frustrate the men in green. Pat Cilliers was held up after the first maul rolled rapidly over the whitewash, only for Bedford to hold a second attempt up to earn themselves a scrum.

But when the ball hit the deck in midfield Irish had a scrum, and this time they would capitalise on the position. Myler floated a long pass to Topsy Ojo, and while the winger was hauled down short enough defenders had been pulled to that side of the field to make life that bit easier for Loader on the left, although the winger still had to use his quick feet and strength to go over.

Bedford’s next spell of pressure was held out comfortably enough, and when the ball came unexpectedly out of the side of a ruck defence was quickly turned into attack by Fergus Mulchrone, who held off an attempted tackle as he headed up the right wing.

Alex Rae’s high tackle of the supporting runner saw the flanker sent to the sin bin, and Irish did not let the opportunity slip.

Only a double-tackle on Terrence Hepetema stopped the centre powering over, and when the ball was held up again a couple of phases later Irish not only had a five-metre scrum but extra space to exploit, which they duly did when Myler found Ojo for try number two.

Myler’s rare misses from the tee – the first having been held up in the wind, the second hitting the post – meant that the lead was only two, meaning that Robling’s second penalty took Bedford back in front.

This prompted another good Exiles attack, a neat chip through the defence giving Ojo something to chase. The ball won back, play went right, but while the whitewash was crossed Greig Tonks’s pass was ruled forward and Bedford maintained their lead until the break.

Bedford may have come out running in the first half, but they had no answer to Irish power at the start of the second as the visitors first won a scrum penalty before driving over from the lineout.

Saia Fainga’a came up with the ball, and with Myler making no mistake at the eastern end of the ground it was the ideal start to the second salvo.

Bedford looked to fight back immediately, keeping the ball alive in traffic and Lane taking a massive Myler bomb superbly under pressure. But Blair Cowan’s interception put paid to any thoughts of a home score, and when a Mulchrone kick ahead was ruled to have been taken over by Dickson the visitors had another great position.

Ofisa Treviranus was held up close to the sticks, and while the scrum this brought descended into a bit of a mess possession was nevertheless retained and Dave Porecki was over in the corner for the bonus point score within 60 seconds of having joined the action.

Tries number five and six came either side of the hour.

The first of these may have been finished by Hepetema but the pats on the back went to Treviranus for the way he powered straight over Rae to go into the clear.

And when the newly-arrived Ollie Hoskins was put into space by a Myler inside pass it set up the position for the next score. Scott Steele and Ojo were in support, so it was to Bedford’s credit that their defence scrambled to first pull Ojo down shy of the line and then hold out the following phases on the line.

But a penalty was turned into the scrum, possession went through a couple of phases and Matt Rogerson finished things off from close range.

These quick-fire 14 points took the game clear for the visitors, but what was even more impressive was the way they kept their own line intact under immense pressure in the final 10 minutes.

Twice Bedford set up camp on the line, but both times they were resisted by a massive effort which maintained the 25-point margin until the final whistle. 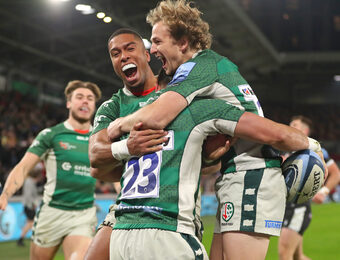