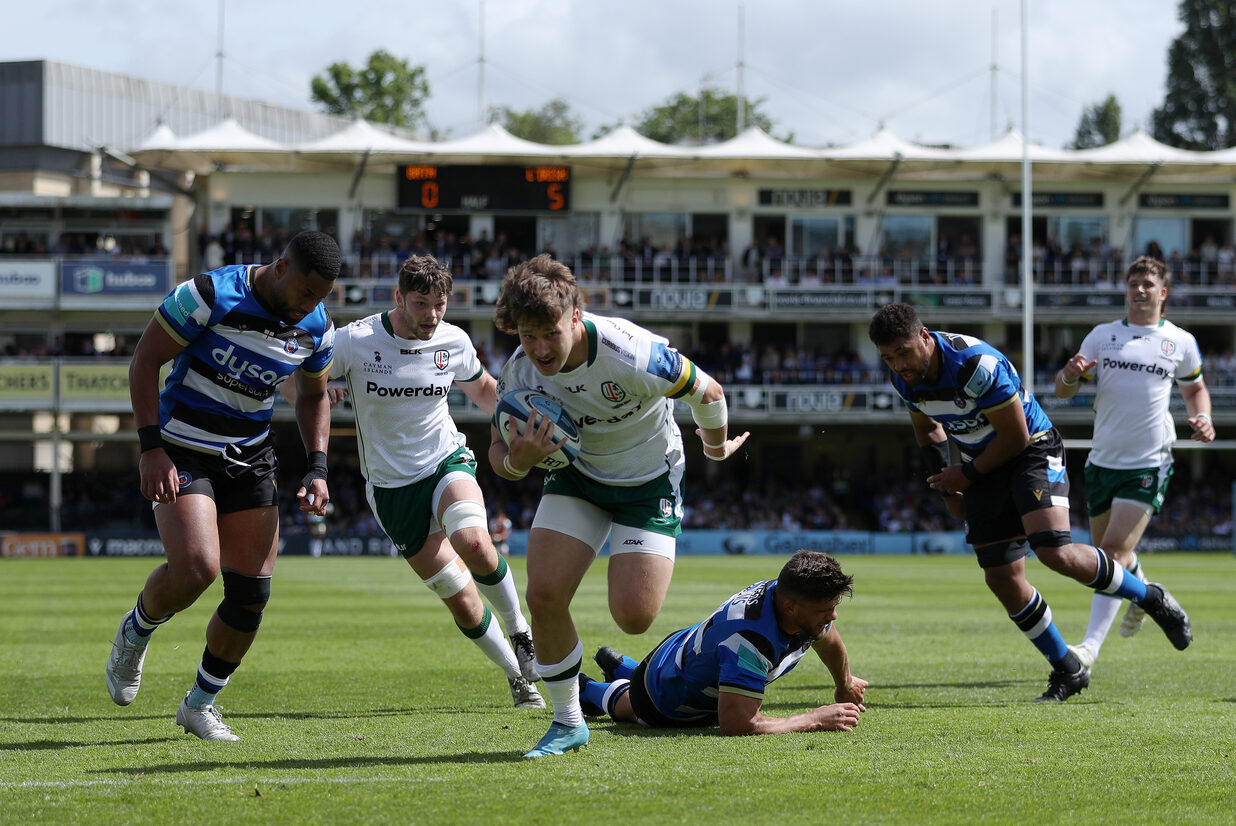 London Irish could not finish off their season with a win but attained try and losing bonus points in a 27-24 defeat to Bath Rugby at the Recreation Ground.

The Exiles took a 10-0 lead after tries from Ben Loader and Kyle Rowe, but converted efforts from Bath’s Mike Williams and Ben Spencer looked to ensure a Bath lead at the break only for Agustín Creevy’s first of a brace to hand Irish advantage.

Creevy bagged Irish’s try bonus from a rolling maul at the start of the second period, but it was to be Irish’s final score of the afternoon as Orlando Bailey’s penalty and Will Muir’s try brought scores level.

Bailey nudged over another placed kick to win the game for his team and leave the visiting side’s hopes of Heineken Champions Cup qualification reliant on results in Round 26 of the Gallagher Premiership.

Bath saw much of the early ball but their first red zone entry bore no points, and their captain Charlie Ewels was sent to the sidelines temporarily shortly after for a no arms challenge.

The Exiles wasted no time in taking advantage of Bath’s reduction of a full complement; finding touch from the resultant penalty and progressing closer to the try line, with Ben Loader, making his first start since another trip to the West Country where too he scored at Ashton Gate, once again dotted down in the corner.

Irish could have had a second after Curtis Rona’s meander down the blindside, coolly offloading to Loader for the youngster to run infield and pass inside to Nick Phipps, only for the scrum-half to knock-on with the try line beckoning.

Ewels’ reintroduction looked to spur on Bath but nevertheless Kyle Rowe was next to cross the whitewash, retrieving an incomplete pass off the floor and into his grasp to dance through three of the Bath rearguard on the right edge and score.

The Scotsman could have been in again following a searing Curtis Rona line break, finding the winger in space only for former Exile Joe Cokanasiga to close such a gap and take the former into touch.

The home side retained the most of possession in the second quarter and made such ball retention count when Mike Williams scored under the posts following on from Orlando Bailey’s breach through.

The Black, Blue and Whites scored directly from the restart after Taulupe Faletau bounced off multiple Irish challenges to then set up Ben Spencer towards the line- Bath had taken the lead for the first time just before the interval.

Irish’s half was not done though, and a Bath infringement at the ruck enabled Jackson to nudge Irish into the corner- solid phase play had the ball worked out to the right by Phipps before Agustín Creevy borrowed over for his 13thPremiership try of the campaign, alongside Jackson’s first extras of the game.

Irish took a three-point lead into their final 40 minutes of the season, only the second time they have done so this year, and an instant impact from Marcel van der Merwe, replacing Ollie Hoskins for a blood injury replacement, won back possession at a Bath put-in and Irish were close to a vital fourth try.

Loader was unfortunate to knock-on in an attempted finish nonetheless, having been on the end of a Jackson mispass but was pressured under good recovery work from Tom de Glanville.

The Exiles got the crucial fourth with a well-executed lineout drill finished off by none-other than Agustín Creevy, a significant score for the Argentine’s last contribution in the game having been replaced by Matt Cornish.

Irish were adjudged to be offside in the phase after a breakdown and Bailey took the chance to bring Bath within a converted score from the tee.

A potential Irish fifth and Rowe second was pulled back for review and chalked off after a forward pass in the build-up as Irish seeked to seal their final outing.

A promising poke through from Bath’s Max Clark found replacement outside back Will Muir to touch down and Bailey’s conversion brought the game level.

Bailey took Bath to another lead from the tee after the Exiles’ scrum was found wanting in their home 22, making the deficit three points with just five minutes left.

Replacement Matt Cornish was the final pair of hands in a flowing passing sequence down the right flank but was pushed into touch in what was the last significant chance for an Irish win.

Bath were successful at another put-in, and after a lineout take and maintaining of the ball, the ball was put into touch and four points belonged to the West Country outfit. 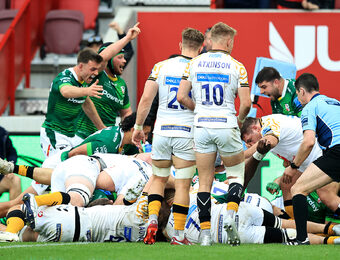