MATCH REPORT: 10 out of 10 for Irish as bonus-points wins keep coming 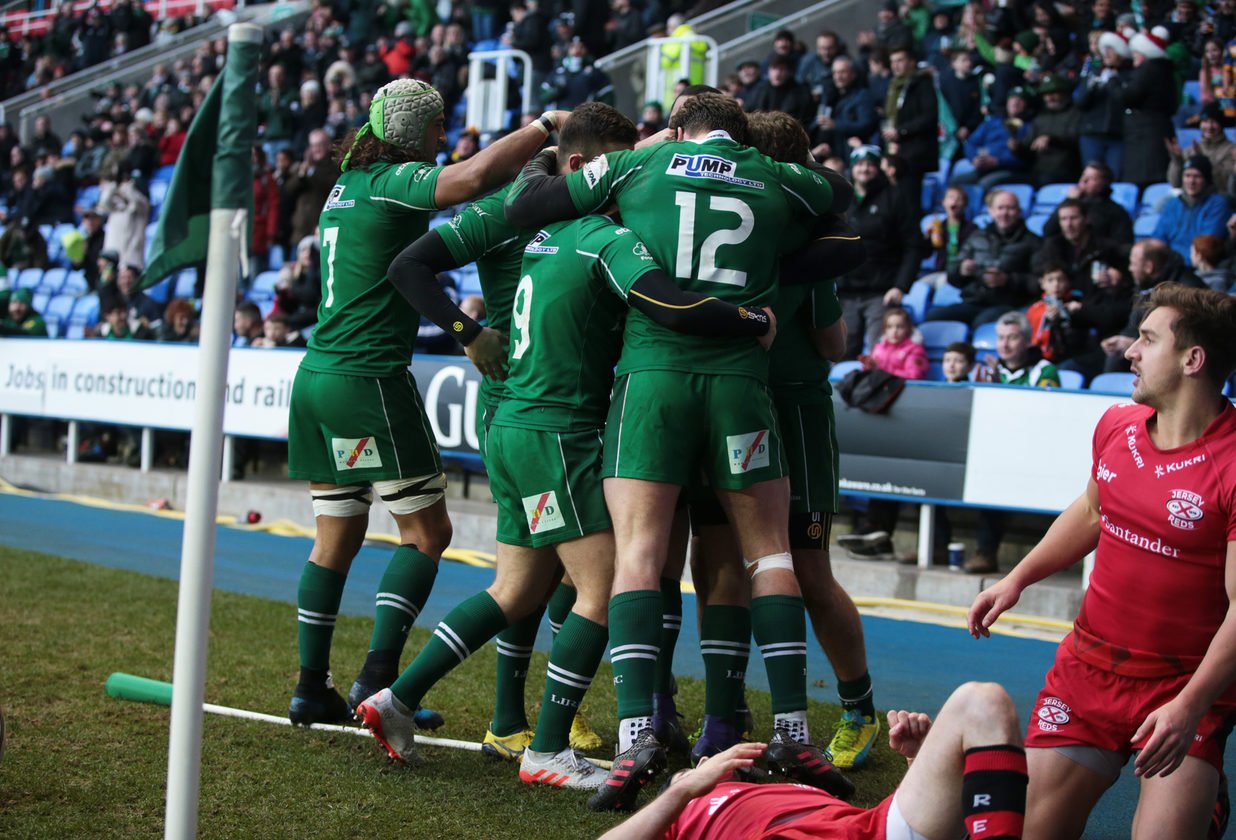 London Irish’s Greene King IPA Championship campaign goes from strength-to-strength as they ran in five tries to record a 42-29 bonus-point triumph over Jersey Reds at the Madejski Stadium.

The visitors were just 17-10 down at the break, but two Irish tries in the opening five minutes of the second half proved decisive as Nick Kennedy’s men maintained their unbeaten run.

Scores from David Paice (2), Richard Palframan, Ben Ransom and Tom Fowlie ensured Irish recorded their ninth maximum point haul in a row to stretch their lead to seven points at the top of the table.

Jersey came out of the blocks the quickest, registering the first score on three minutes through a Guy Armitage try. A quick tap penalty from scrum-half Sam Fisilau opened up Irish’s defence with former Exile Armitage providing the overlap on the nearside to sprint half the length of the field to touchdown in the corner. Sam Katz's impressive touchline conversion gave the Reds the early initiative at 7-0.

Frustrating Irish at every opportunity, Jersey had a clear game plan to control play both at the breakdown and in the scrum. In fact, it was a Reds infringement at the break down that enabled Tommy Bell to reduce the deficit to 7-3 with the boot on 17 minutes.

Back in the contest, Irish took the lead six minutes from the interval when Paice added the final touches to a driving lineout. Bell’s impeccable boot made it 10-7 to Irish.

With half-time approaching, Jersey restored parity by virtue of an exquisite penalty from Katz who struck home his effort from inside his own half.

On the stroke of half-time the hosts crossed for their second try of the afternoon, Palframan touching down from a driving lineout. Bell’s conversion ensured Irish led 17-10 at half-time.

The Exiles began the second period in emphatic fashion, Ransom and then Fowlie adding their names to the scoresheet in the early exchanges. Working through the phases, Bell flung a looping pass to Ransom, who dipped his shoulder to score in the corner, before Fowlie replicated the feat moments later to gift wrap the bonus-point.

Leading 29-10 with 44 minutes on the clock, you would have been forgiven for thinking that Irish would push home their advantage. However, Jersey would not lie down and were soon back in the contest courtesy of a Marc Thomas try on 46 minutes. Jersey looked to puncture holes in the Exiles’ defensive line and despite a try-saving tackle from Scott Steele, the Islanders would not be denied the score. Katz added the extras to reduce the margin to 29-17.

After Bell kicked his second penalty of the contest to increase the home side’s lead to 32-17, Jersey hit back with a converted try just shy of the hour mark. Greig Tonks’ decision to opt for a cross-field kick to the openside deep inside his own half had repercussions with Jersey winger George Watkins claiming the ball, before shrugging off two would-be tacklers to score. Katz was unable to convert and Irish were 32-22 ahead.

From the restart Irish were immediately on the front foot and following a string of carries from the Exiles pack, Paice crashed over to bag his brace for the day. Bell’s two points made it 39-22 and the former Leicester man added further gloss to the score-line on 67 minutes with a drop-goal.

The Reds got their reward for their endeavour nine minutes from time, number-eight Nick Haining scooping the ball up from the base of the scrum to cross the whitewash and secure a deserved losing bonus-point. Katz converted to end the game 42-29 in favour of Irish.