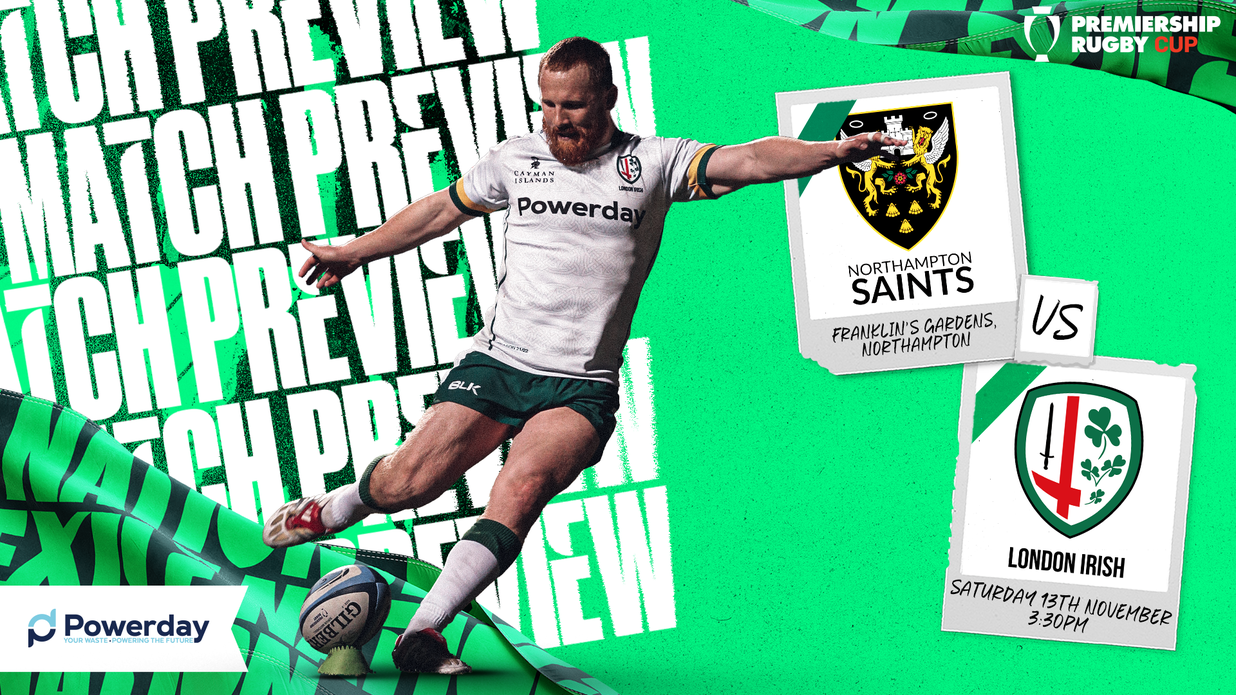 London Irish take on last year’s table-toppers Bristol Bears at the Brentford Community Stadium this Saturday, fresh off the back of their first win of the season.

The Exiles put in a polished 80-minute performance in their 33-21 victory over Exeter Chiefs, running in five tries at Sandy Park, with four of the dogged, irrepressible pack – including debutant Tom Pearson – recording each of the highest individual tackle counts of the round across the Gallagher Premiership.

Pat Lam’s side will hope to be recalibrated after playing out their bye week in Round 6, with the Ashton Gate outfit currently sitting in 12th spot in the league.

The Bears’ most recent 13-5 loss away to Newcastle Falcons was their fourth reversal of the season, with their only win coming against West Country rivals Bath Rugby in Round 3.

If last season’s encounter at the BCS is anything to go by, this weekend’s clash promises to be yet another entertaining affair. Honours ended even in a 34-34 draw last term, as Bears ended the season clinching a second successive play-off berth, eventually losing to Harlequins in the semi-final stages.

Bristol Bears’ time under Pat Lam has, so far, been a near unrivalled success, having made the play-offs in two of his three seasons in charge in the top-flight.

Alongside a promotion in his first season at the helm, Lam has also earned the Bears’ first piece of European silverware with a 32-19 Challenge Cup win over Toulon in 2020.

The 53 year-old is no stranger to transforming the fortunes of other rugby institutions, most notably Connacht Rugby, who won their novel Pro12 under Lam in 2016.

In his four year first major coaching stint with Auckland Blues, Lam won the 2005 and 2007 ITM Cups, having won the Premiership as a player with Newcastle and then the Heineken Cup with Northampton in 2000.

One to Watch – Callum Sheedy

Despite being selected in Wayne Pivac’s Wales squad for the autumn internationals, Callum Sheedy will be available to take to the field this Saturday due to the nature of the Six Nations champions’ game against the All Blacks falling out of the international fixture schedule.

The 26 year-old, boasting 12 international caps, is a graduate of the Bears’ Academy and scored 14 crucial points from the boot against Irish in last term’s 34 points apiece stalemate in West London.

Sheedy has split the post 11 times from his 14 attempts this year, with a scoring streak of six consecutive kicks.

The Welshman finished in the top-ten in points scored in the last three campaigns, and is on course to better last term’s haul of 91, with 29 points so far this season.

London Irish secured two points in the most dramatic style via the boot of veteran out-half Stephen Myler, as honours ended even at Ashton Gate in the 2019/20 campaign.

The Exiles held a four-point advantage at the break, as Ben Meehan’s converted try counteracted Callum Sheedy’s opening effort from the tee.

The home side then regained the advantage in the second half with Nathan Hughes and Charles Piutau touching down in what became a seesaw final 40 minutes.

Both sides traded blows, with Irish’s Waisake Naholo and Tom Parton and the hosts’ Ed Holmes and Harry Thacker crossing the whitewash, before Myler punished the Bears’ ill-discipline with the equalising three points.

Bristol Bears stalwart lock Joe Joyce remains firm in his belief that the current squad is capable of reaching the heights of yesteryear.

Speaking after their last fixture against Newcastle Falcons, Joyce said: “We don’t need to change too much. It is a loss, we will review what we did badly and move on and fix it.

“Obviously people are injured, but I remember last year we got the most points during the international window and during the season and people were saying how good our squad is.

“Now people are saying it’s not so good – but it’s the same squad.

“We have got too many people at this club who care, too many leaders who know what they are talking about, too many good coaches. It is only going to be a matter of time.”