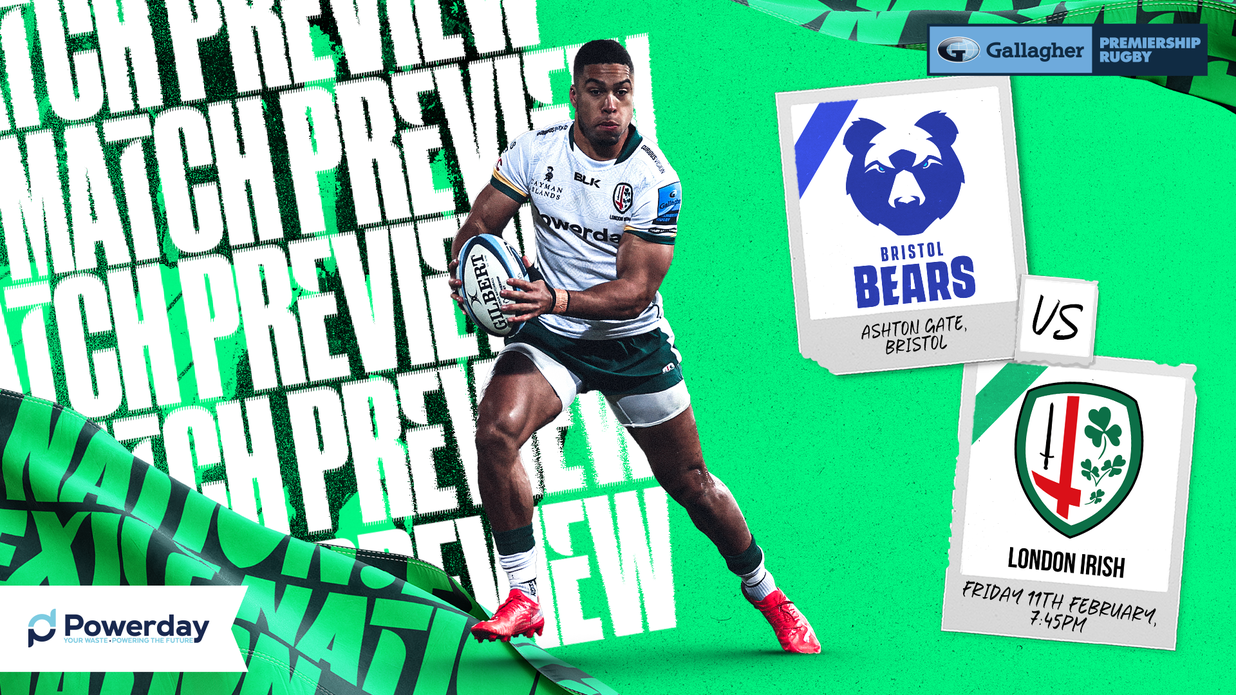 London Irish return for another edition of Friday Night Lights in the West Country with a visit to Pat Lam’s Bristol Bears at Ashton Gate.

A five-month run of consistent point returns for the Exiles was brought to an end in a 24-7 reverse to Gloucester Rugby in Round 15, with tries from Ollie Thorley and a Ruan Ackermann brace cancelling out Olly Cracknell’s first Premiership try for Irish.

A steady turnaround after a slow start to the season seems to be in full flow for Bristol.

Having won just three of their opening 10 league outings, the Bears have since won four of their last five games in all competitions, each with a try-bonus point, but have mustered only two wins in their last six Premiership matches.

Lam’s side crossed for four tries against Newcastle Falcons at Ashton Gate in Round 15 for what was their first successive Premiership win since November 6th.

Summer signing from Saracens Tom Whiteley impressed in his first start – the versatile scrum-half slotting in at 10 to kick 17 points with a 100% record from the boot, along with a try assist against the Falcons.

Pat Lam was an accomplished Premiership player following two stints with Newcastle Falcons and three years at Northampton Saints, winning a Premiership title with the former and a Heineken Cup with the latter, alongside the RPA Players’ Player of the Year gong in 2000.

Not to mention representing the All Blacks and also Samoa at the 1991, 1995 and 1999 World Cups, the 53-year-old made his move into coaching as an Assistant Coach with Scotland before two ITM Cup successes with Auckland.

Prior to his arrival in BS3, Lam took Connacht to their one and only Pro12 success in 2016, winning 20-10 over fellow Irish province Leinster.

He took his talents to the Bears in 2017, winning promotion in his first season and taking no longer than two seasons to lead the club to their first play-off berth in 13 years and novel Challenge Cup win in 2020.

One to Watch – Ratu Siva Naulago

Two appearances, two tries – having not played since March, Ratu Siva Naulago’s impact for Bristol Bears upon his return from a broken arm injury has been more than measured.

After a knee injury brought about a premature conclusion to his 2020/21 campaign, the Fijian flyer has made up for lost time, touching down seven times in nine Premiership appearances last season.

The second of his two tries against the Exiles in the frenetic 34-34 draw at the Brentford Community Stadium in 2021 was voted as the Premiership’s Try of the Season.

On his return to the Premiership against Newcastle last weekend, Naulago made an absurd 141 metres in eight carries (the most by any player in Round 15), beating four defenders, executing three clean breaks and four turnovers to accompany his try.

The 30 year-old switched codes from rugby league side Hull FC in 2020, boasting a record of 17 tries in 21 appearances for the Humberside outfit.

London Irish will look to break a 13-year duck of winless away visits to Bristol this weekend, but it was strong character from the Exiles that prevailed during their previous triumph in an 18-13 comeback at the Memorial Stadium.

Toby Booth’s men held an 11-point swing at the break thanks to two penalties from Peter Hewat and Sailosi Tagicakibau’s unassailable dash to the whitewash.

The hosts’ belated reply after a responseless opening 40 saw Ed Barnes architect a Bristol fightback – knocking over a 40 metre penalty two minutes after the restart, before his cross-field kick stretched Irish’s defence and Luke Eves dotted down.

Five more points from Barnes’ boot was counteracted by Geraghty intercepting his pass and adding another rangey Exiles score for the lead, confirming a fifth straight league win for London Irish to advance to the helm of the Premiership table.

In light of Bristol Bears’ sweeping 37-21 win over Newcastle Falcons, Director of Rugby Pat Lam was determined to outline the improvements needed in his side before Irish’s visit this Friday.

“We played some really good rugby and the flashy stuff can be really good but we need to tighten up on the little things like knocking balls back carelessly from line-outs," Lam stated.

“Our discipline was poor as we gave away so many penalties and we knew Newcastle wouldn’t give up.

“The two yellow cards just before half-time was a problem but we said at the interval that we needed to take control for that sin-bin period, which I thought we did well and the players have to take credit for that.”