This is the Digital Programme for the final pool stage clash of the Premiership Rugby Cup against Bath Rugby!

Before the action gets underway at the Gtech Community Stadium tonight at 7:45pm, get in the mood with some pre-match reading.

Matt Williams is set to make his first appearance of the season since picking up an injury against Munster in pre-season.

The London Irish Academy graduate has been forced to watch his teammates from the side lines thus far, but can’t wait to take to the field in tonight’s Premiership Rugby Cup clash with Bath Rugby.

“It feels like a long time coming to be honest,” said Williams.

“After taking a knock in the pre-season friendly against Munster, I thought I would be able to get over it quite quickly, but unfortunately it took longer than expected and led to me being out for longer than anticipated.

“I’m so happy to be back out there and playing again, tonight is a good opportunity to put my hand up and hopefully get a good performance under my belt.”

Cup rugby always has an extra bite about it, and tonight is no different.

A win will secure safe passage into the semi-finals of the competition, and Williams insists that he and his teammates are more motivated than ever.

“We are treating tonight as a quarter final.

“Quite simply, if we win, we are through, if we lose, we are out. So, it feels like knockout rugby.

“Last year, we felt we let the trophy slip out of our hands, so we are excited to get the chance to right some wrongs from last season.

“We want to progress in this competition and get into the semi-finals.” 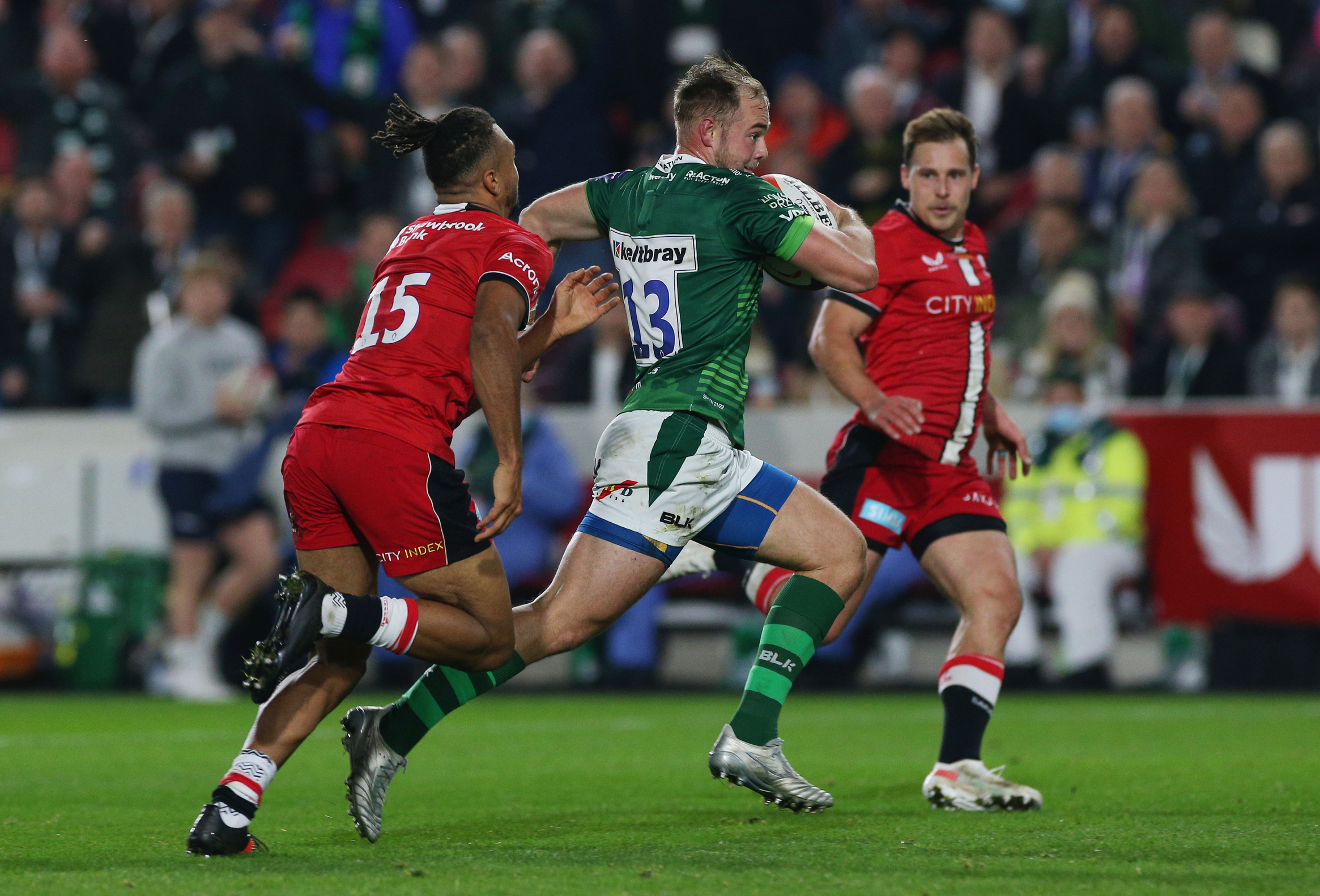 Eddie Poolman is set to be handed his first appearance for the Club this evening, and Williams has been impressed with the centre’s first contributions since touching down at Hazelwood.

“He’s been really good since he arrived, he’s gelled with the squad quickly and is learning how we like to play the game here.

“He’s getting to know our principles and I’m looking forward to seeing how he goes in the green shirt.”

Williams has been getting used to holding a leadership role at the Club over the last season or so, something that he has embraced.

He, along with the likes of Jacob Atkins and tonight’s captain Jack Cooke, has often stepped into a senior position to help the less experienced members of the squad adapt to life at London Irish.

“There has been a lot of preparation for the younger core group that has been coming through at Irish for these leadership roles that we now find ourselves in.

“It’s time now that we embrace these roles and start to make our mark on how we go about things.

“We need to show the experience that we’ve accumulated after being at the Club for such a long time.

“We will look to lead on the field, both with our words and our actions, and hopefully, we can help some of the younger guys coming through and assist with the squad putting in a good performance tonight.”

Having spent the start of the season on the side lines, Williams has been able to assess how the Club have gone so far this campaign.

So, he went on to explain his thoughts.

“We feel like we are close to where we want to be but have let ourselves down in crucial moments in games.

“We are very ready to right those wrongs and to push on from now.

“The Saracens result was a big one for us, just to show where we can go to as a team.

“When we are on our day, we can beat any team in the league, it’s just about putting a series of those performances together now.

“We need to start being a bit more consistent, we will take each game as it comes but we have eyes on further up the table - that’s where we want to be as a Club.”

London Irish welcome Bath Rugby to the Gtech Community Stadium this evening to see out the pool stages of their 2022/23 Premiership Rugby Cup campaign.

With the unfortunate demise of Worcester Warriors and Wasps, the fixture was arranged in order to “allow a fair and equitable qualification for the competition's semi-finals,” in a statement released by Premiership Rugby.

Being two points adrift from Pool 3 leaders Northampton Saints, the Exiles know that a win against Bath will secure a successive knockout stage berth, with a bonus point victory handing them a home semi-final.

Johann van Graan’s side, who have picked up just one point in the competition, will hope to attain their first win of their cup conquest after consecutive losses against Gloucester Rugby, Bristol Bears and Exeter Chiefs.

The team in Blue, Black and White could not build upon a 2017/18 cup final appearance and are yet to make it out of the pool stages since the formation of the Premiership Rugby Cup.

A 26-22 win away from home for the West Country side was the result of the previous cup encounter between the sides, Freddie Burns’ penalties in the fourth quarter the deciding factor on the road to Bath’s last cup final five seasons ago.

Tonight’s visitors have a storied history in English cup competition, lifting 10 trophies throughout the John Player and Pilkington Cup eras during the 1980s and 90s.

They welcome Archie Griffin into the fold for his novel senior start, with first team regular Tom de Glanville in line for his fifth appearance for Bath this term after a hamstring injury.

One to Watch - George Worboys:

Bath’s Academy fly-half, equally versatile at full-back, has been tied to the Club since his ACE days with local school Beechen Cliff, and spent time on loan with Clifton Rugby last season.

He has been capped for England at under-18 level alongside teammates such as Orlando Bailey, demonstrating his attacking vision in hand and from the boot in his time with Bath as well as Coventry in the Championship this term. 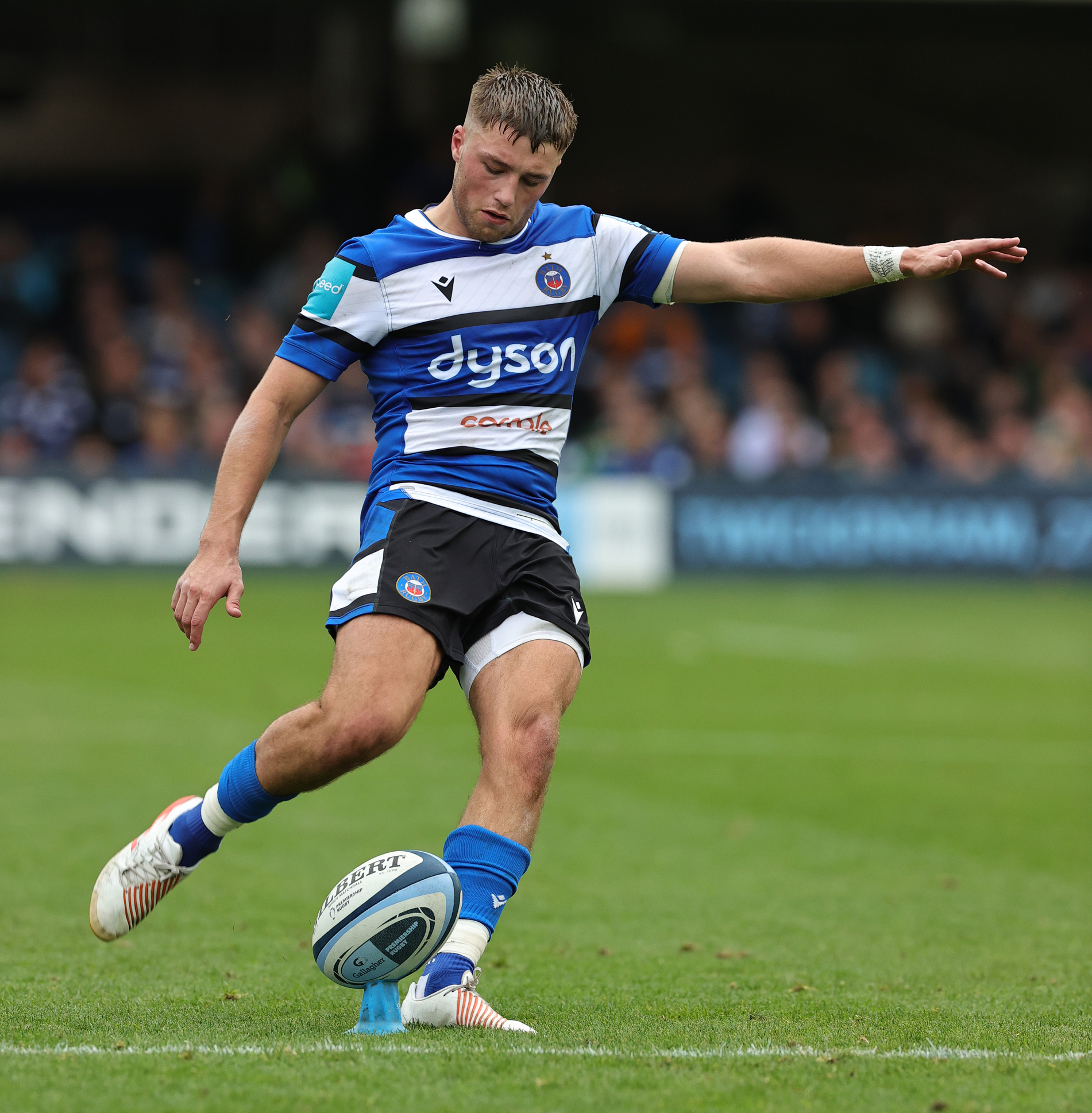 Worboys lined up for Bath United this past offseason to take on a select London Irish side in one of the Clubs’ final pre-season outings, slotting two conversions in the defeat at the hands of the Exiles.

At just 21-years-old, the back has a creditable background in the competition in what will be his eighth tournament game, amassing 17 points in his cup outings.

He was handed a Premiership starting debut this term, contributing a decisive 12 points from the tee in a win over Northampton Saints that was followed up by another victory over Newcastle Falcons. 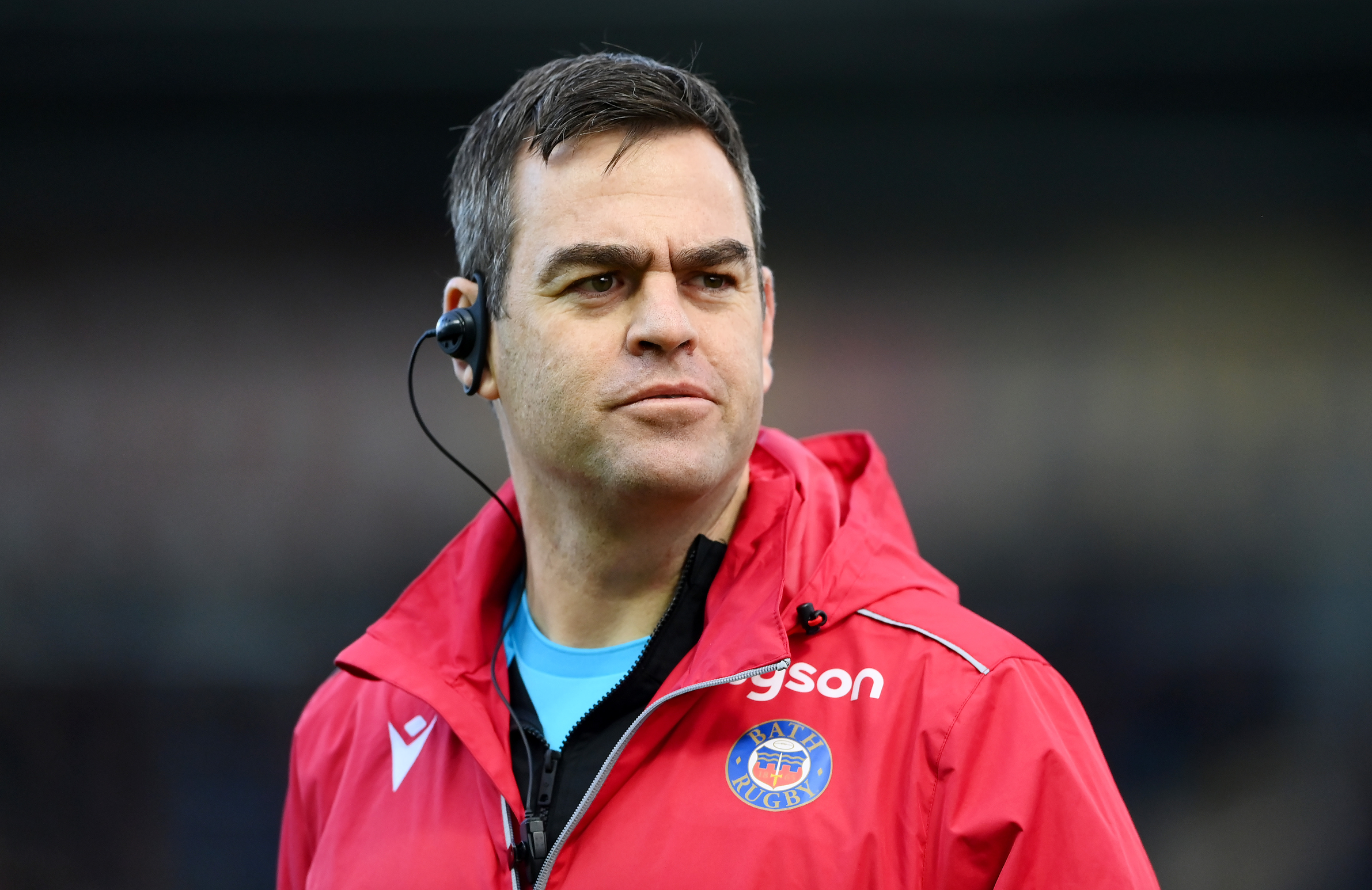 In what his first season at the Rec, Johann van Graan officially assumed the mantle with Bath Rugby in July 2022 having joined from United Rugby Championship outfit Munster Rugby.

In his time in Limerick, the 42-year-old was involved in leading the province to three league semi-finals, a Pro14 final and two Champions Cup semi-finals alongside long-time collaborator, JP Ferreira.

Ferreira joined van Graan on his travels over the Irish Sea last year, the South African duo first linking up in Ireland after success stories in South Africa with different franchises.

Van Graan aided in the Blue Bulls’ Super Rugby titles between 2007 and 2010, eventually being welcomed into the international fold with South Africa where he picked up a bronze medal in the 2015 Rugby World Cup.

Despite their cup record, in his time since moving to Bath the Head of Rugby has picked up wins over Northampton Saints, Leicester Tigers and twice against Newcastle Falcons in the Gallagher Premiership.

With the dawn of a new year comes a raft of new opportunities, and the chance to secure home seeding in the Premiership Cup is the first opportunity of the year for this team.

As I’ve written in this column before I am very fond of the cup and the opportunities it gives to young players who sit outside the regular match day 23. We’ve seen the likes of Jack Cooke step up as leaders while Henry Arundell made the most of things last season with his performances in the competition.

As important as those opportunities though is the knowledge that players can be rewarded for taking them. Rory Jennings embraced opportunity when he was an early substitute against Saracens and was rightly rewarded for his excellent performance with a start in the 12 shirt to face Gloucester.

It will be interesting to see who makes the most of their opportunities today.

Speaking of opportunities, the Six Nations will soon be upon us and with Steve Borthwick in the hot seat for England we will be hoping to see more of our team get their shot at the national shirt. The likes of Ollie Hassell-Collins and Tom Pearson have been into camp before, and Ben Loader’s form should earn him some consideration too. We’d have hoped to see Arundell and Joseph of course but injury may rule them both out. 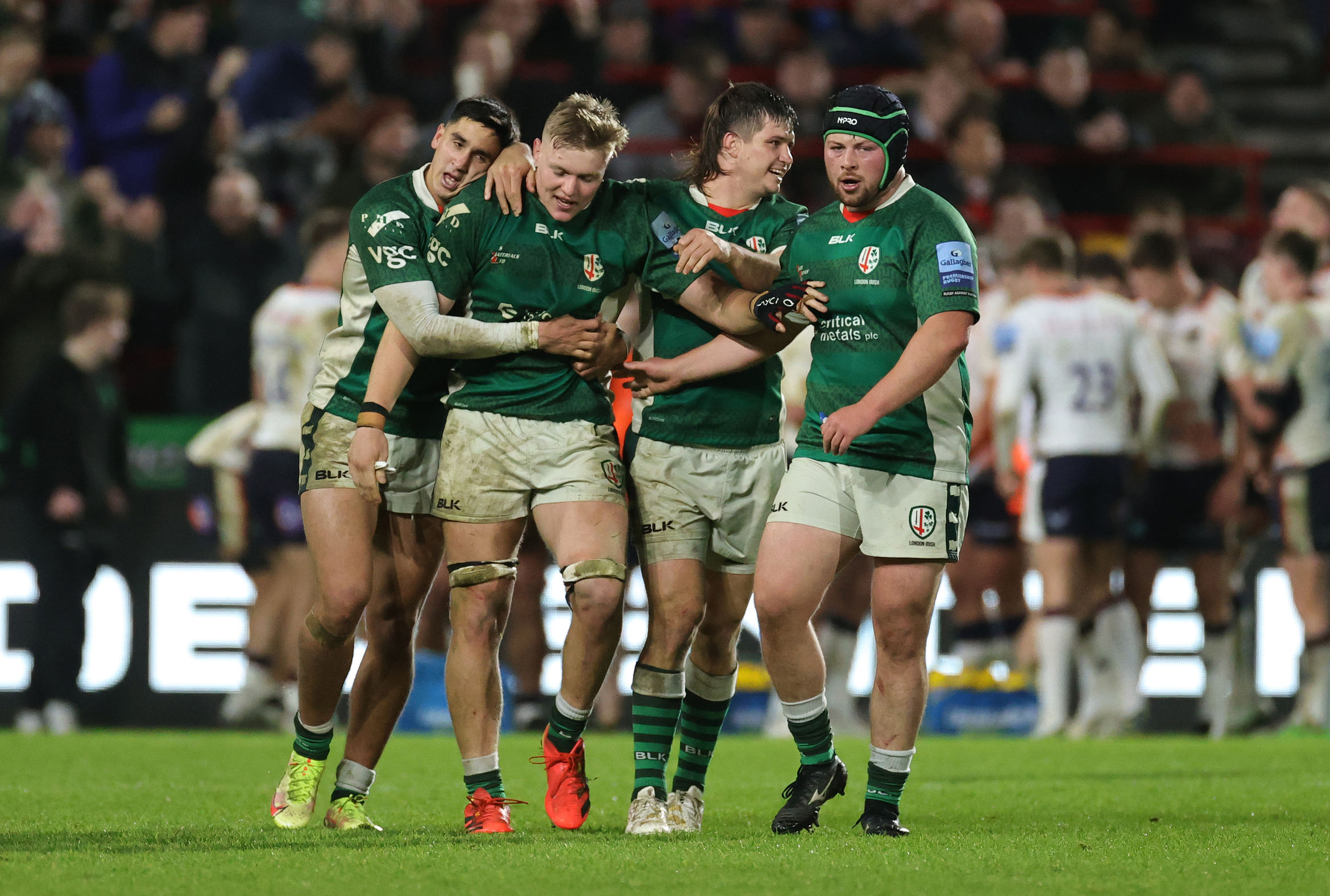 For now, though, the team can focus on the cup and look ahead to the league while treating our last two Champions Cup fixtures as another set of opportunities for players to make their mark. While I’ve not done the maths it looks like our chances of progressing in Europe are pretty much gone so I would like to see the team use those two games as opportunities to give more players experience of playing against the elite of European (and South African) opposition.

Regardless, I’m sure those making their way to Montpellier will have a wonderful time and I can’t wait to watch the Stormers visit. Being back at the big table in Europe has been a great adventure, but I really hope we don’t have to wait another decade to qualify again!