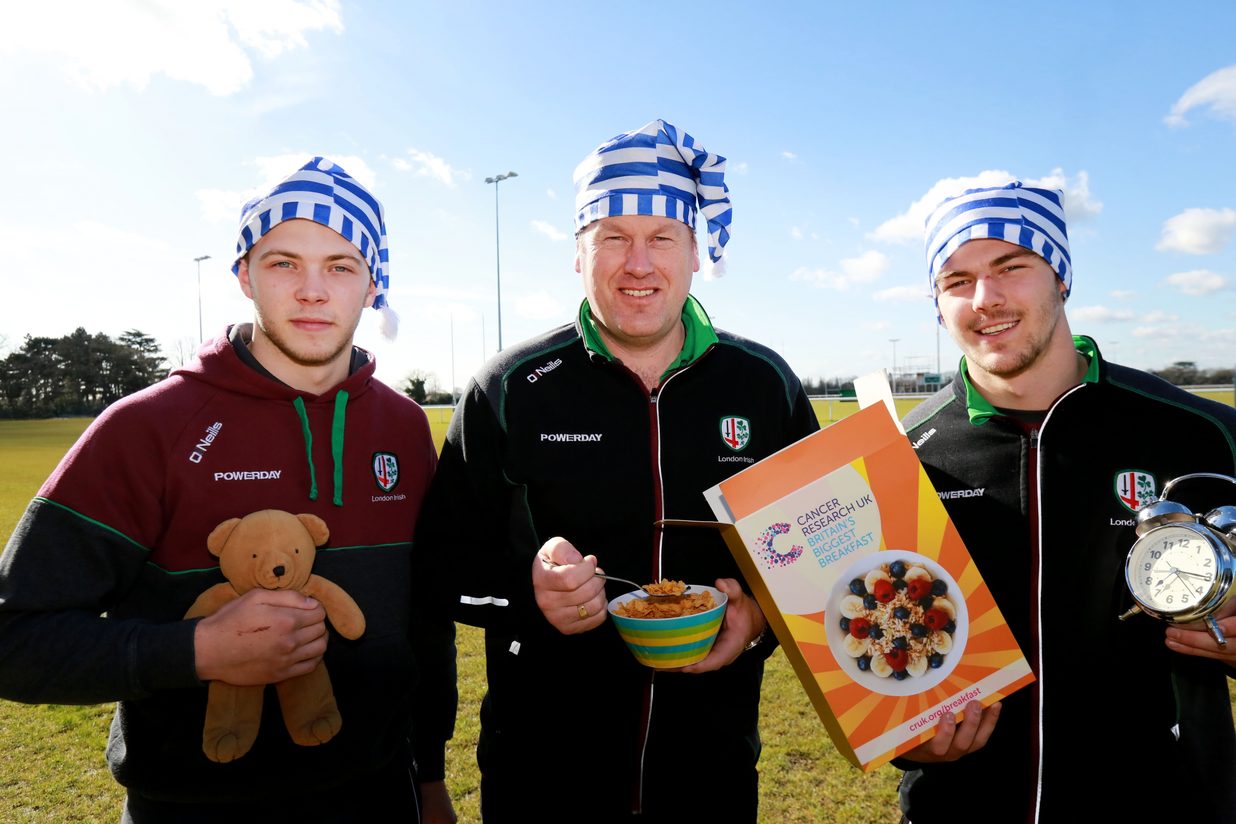 Staff and players teamed up with supporters and school children at the rugby football club’s training grounds in Hazelwood, Sunbury-on-Thames to raise money to help beat cancer sooner.

And the team are calling on local men and women to bring out the breakfast bowls and get involved.

Britain’s Biggest Breakfast for Cancer Research UK is a fundraising campaign which calls on supporters to host or attend a breakfast event on Friday 11 March, or any time during the month.

The charity is encouraging people to organise a breakfast party at home, in the office or at school and invite their friends and family to make a donation to attend.

Head of Rugby Operations Glenn Delaney, 42, of north Kingston is backing the campaign following his dad John’s treatment for skin cancer. Originally from New Zealand, Glenn moved to the UK 18 years ago.

He said: “In the late 70s and 80s people just weren’t aware of how dangerous the sun was. My dad was diagnosed six years ago and he had to have extensive surgery to his head – including the remoulding of his ear – to remove the cancer.

“Despite the surgery his prognosis was still not good. We all prepared ourselves for what that news might mean but fortunately with ongoing radiotherapy and treatment he is continuing to do well.

“We know so many friends whose stories have not ended this way so feel incredibly lucky he is still with us. It’s testament to the incredible skill of Dad’s surgeon and research which has helped to develop such effective treatment.

“That’s why Cancer Research UK’s work is so vital and I’m proud to support it.”

Every day, around 130 people are diagnosed with cancer in the South East*. And that’s why Cancer Research UK is calling on people across the region to sign up for their free fundraising pack now.

“We’re asking local people to follow their lead and invite friends, family and neighbours to take a seat at the breakfast table. A hearty brekkie is a great way to start the day, so it’s time to set the alarm and make your breakfast bigger and better than ever this March.”

Britain’s Biggest Breakfast is one of many fundraising challenges London Irish are set to tackle as part of a charity partnership with Cancer Research UK.

On Saturday 12 March London Irish will play the first ever Aviva Premiership fixture overseas when they take on Saracens at the Red Bull Arena in New Jersey. They are encouraging fans to host breakfast parties to kick-start their day and prepare them for the 8pm kick-off. London Irish will issue prizes for the biggest party, the most money raised, and the best picture. Be sure to tweet #BiggestBreakfast to @LiRFC or share them with the club’s Facebook page for your chance to win.

London Irish will also be supporting Cancer Research UK at the St Patrick’s Day game on Sunday 20 March at the Madejski Stadium. Supporters can purchase match tickets to attend the big game with an optional donation to Cancer Research UK or make a donation on the day around the ground.