London Irish promoted to the Premiership 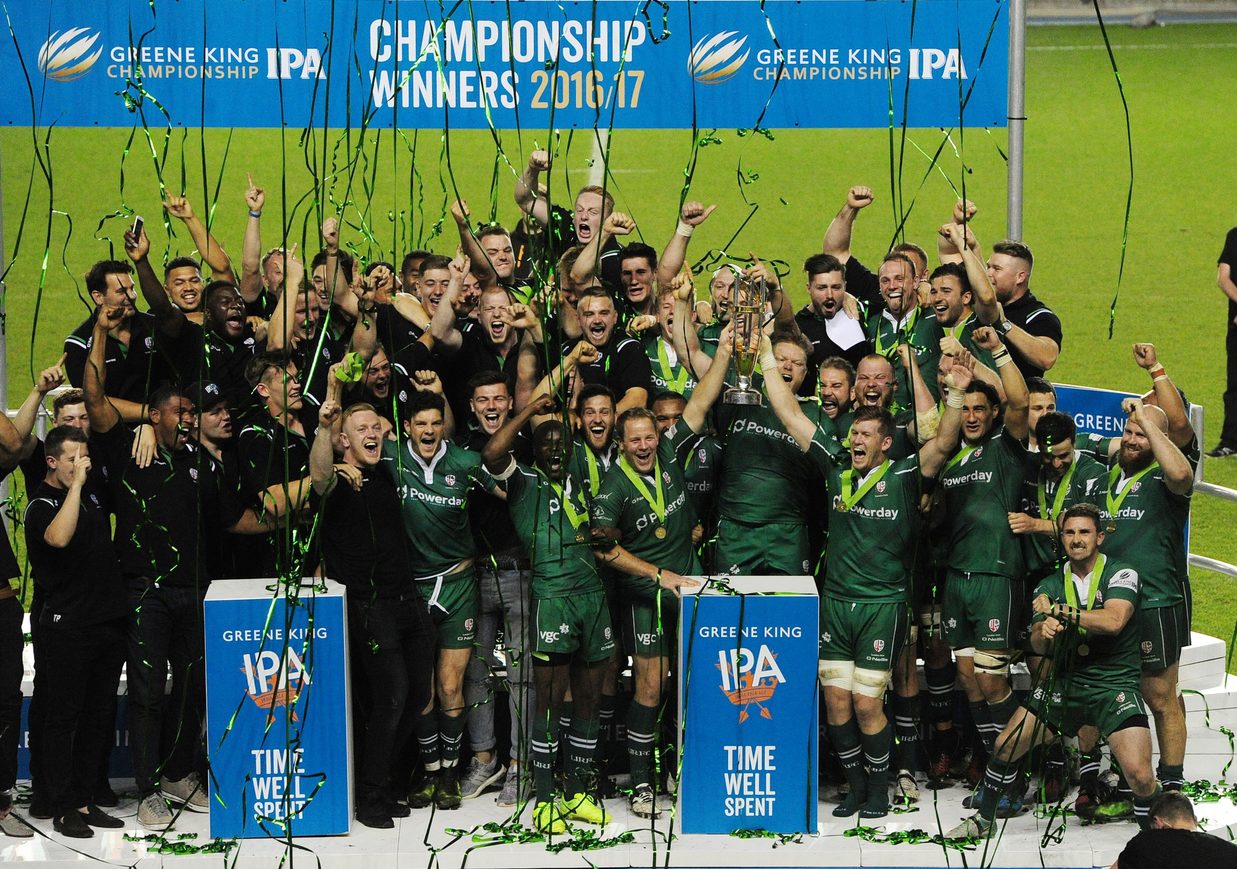 It was party time at the Madejski Stadium as London Irish secured an immediate return to the Premiership following a 55-48 victory over Yorkshire Carnegie in the second leg of the Greene King IPA Championship Play-off Final.

An entertaining spectacle for the neutral, the 84-66 aggregate triumph was anything but for the Exiles faithful over the two legs.

A brace apiece from Alex Lewington and Brendan McKibbin coupled with first half tries from Ciaran Hearn and Fergus Mulchrone were enough for Nick Kennedy’s men to reach the Promised Land.

Kennedy, who was appointed Director of Rugby last summer, has cultivated a squad that has been relentless in its approach throughout the campaign.

Irish came out of the blocks in emphatic fashion, Canadian international Hearn crashing through a gap to race in from 30 metres out. Tommy Bell uncharacteristically skewed the subsequent conversion wide, but the Exiles were in the ascendancy at 5-0 on the night and 34-18 on aggregate.

Yorkshire levelled the score on eight minutes through Seb Stegmann, sloppy handling in the back division presenting the winger with a clear run to the line despite the desperate efforts of Mulchrone. Joe Ford made no mistake with the conversion to close the aggregate deficit to 34-25.

Ford repeated the trick moments later, this time with a penalty following an infringement in the scrum to extend Carnegie’s lead to 10-5. However, the hosts who were backed by a bumper crowd, hit back on 15 minutes as scrum-half McKibbin scooted in under the posts. Bell’s conversion edged Irish 12-10 in front with a 13-point aggregate lead.

In a nip and tuck affair, it was Carnegie’s turn to cross the whitewash on 18 minutes, Mike Mayhew breaking clear from the base of the ruck to score. Ford’s conversion put Yorkshire 17-12 ahead.

Midway through the first period, Irish reduced the arrears to 15-17 for the evening by virtue of a Bell penalty following excellent mauling in the Exiles’ ranks.

On 33 minutes the Exiles were a fingertip away from regaining the lead when Ofisa Treviranus knocked on over the line under severe pressure from a valiant Yorkshire defensive effort.

The key moment of the contest came on the stroke of half-time when Mulchrone’s try was awarded by the TMO after there was suspicion of obstruction from Paice. Bell added the two points for a slender 22-17 advantage. The boot of Ford cut the gap to 22-20 going into the break with the nervous tension reverberating around the ground as both sets of players went into the dressing rooms for a well-earned reprieve.

Irish came out for the second half in positive mood and racked up their 100th try of the season courtesy of a scintillating solo effort from Lewington. Skipping past four would-be tacklers, the Nottingham-born winger, who would have been doubly happy this evening thanks to Manchester United’s victory in the Europa League Final, dotted down under the posts.

29-20 up on the day and 57-20 on aggregate, Irish began to turn the screw on the Leeds-based club and pushed home their advantage in the shape of McKibbin. The Aussie No. 9 sniped his way to the line following industrious work from the impressive Mulchrone at the heart of the Exiles’ backline. Bell’s simple conversion put Irish 36-20 in front with a comfortable 27-point aggregate lead.

Hungry for more tries, Lewington put the tie out of sight just shy of the hour mark as he pounced on a loose ball to sprint in from 35 metres out. Mike Coman saw yellow for a dangerous tackle from the restart and Irish had to withstand a period of sustained pressure in the minutes that immediately followed, with Ben West eventually breaking the home side’s resolve to crash over from close range. Ford’s kick made it 43-27.

Back-to-back penalties from the irrepressible boot of Bell gave Irish a handsome 33-point aggregate advantage, before Carnegie replacement loosehead Lewis Boyce was sin-binned for an off the ball punch on Coman. It could easily have been a straight red, but referee Matt Carley opted to show a yellow. Yorkshire rallied with three late tries and there was also time for an ugly flash point, which produced red cards for both Ben Franks and Charlie Beech. However, the night belonged to Irish, who can now look forward to life in the Premiership.