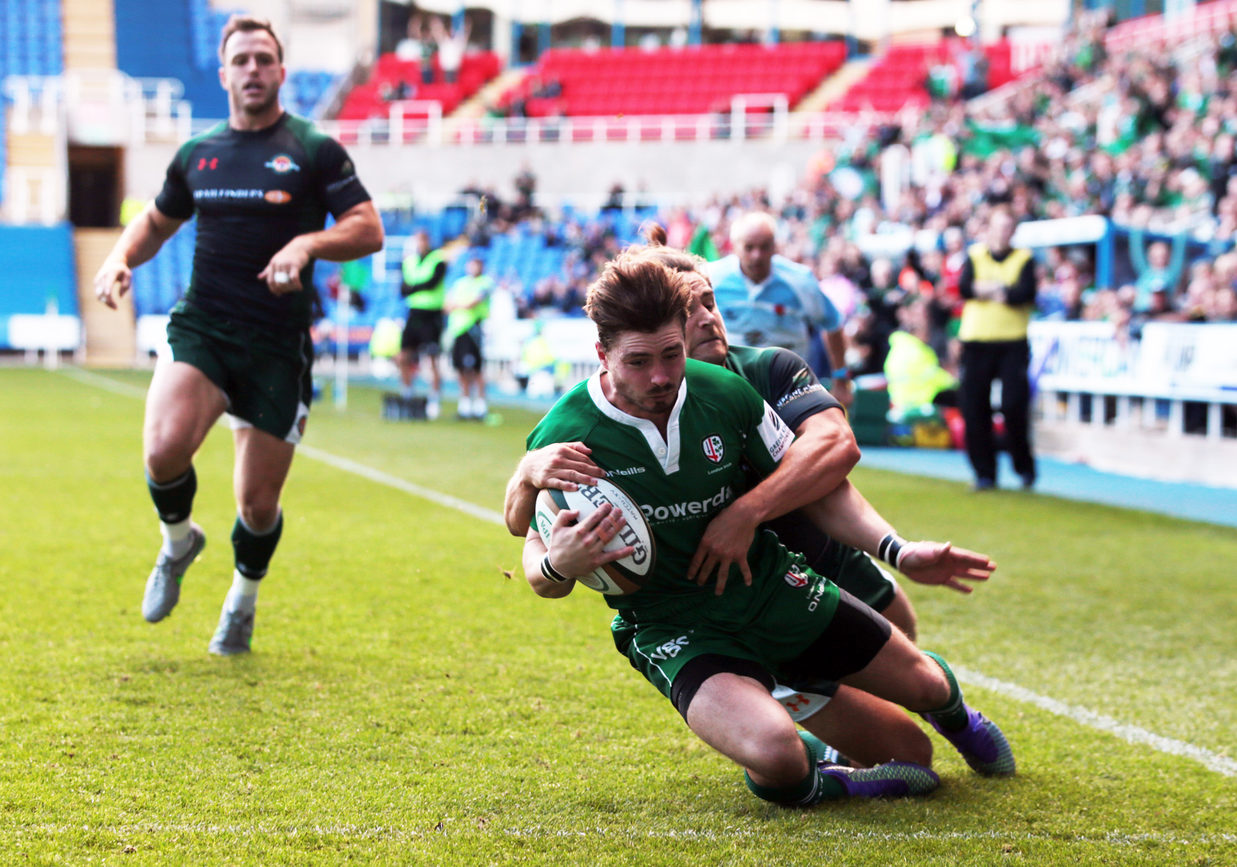 London Irish maintained their 100% record in the Greene King IPA Championship with a 32-12 bonus-point victory over Ealing Trailfinders at the Madejski Stadium.

Two tries in either half from Ben Ransom, Joe Trayfoot, James Marshall and Scott Steele made it four wins out of four for Nick Kennedy’s men, who now gear-up for next Friday’s trip to Nottingham Rugby.

Ealing arrived at the Madejski in buoyant mood, having toppled well-fancied Jersey Reds 20-15 on home soil last weekend. And Player Coach Ben Ward, a late inclusion in the starting XV, will have been pleased with what he saw from his side as the west London club frustrated the Exiles for much of the afternoon with a gutsy display.

Irish were quick off the mark, scoring their first try of the contest with just two minutes on the clock when Ransom took Fergus Mulchrone’s neat offload to squeeze in at the corner. Tommy Bell’s touchline conversion ensured Irish had the early advantage at 7-0.

Bursting out of the blocks in emphatic fashion, you would have been forgiven for thinking the flood-gates might open. However, the visitors regained their focus and underlined their determination with a try of their own 10 minutes from the interval. After Bell extended Irish’s lead to 10-0 with a penalty, Ealing hit back with a try of their own on 30 minutes courtesy of number-eight Willie Ryan. Ward elected to kick for the corner in favour of three points, and Ealing’s ambition paid dividends as they collected clean ball at the lineout to set the platform for Ryan to crash over from close range. Ward’s superb conversion from out wide closed the gap to 10-7.

Back came Irish, and after Bell slotted home his second penalty of the afternoon on 34 minutes, blindside flanker Trayfoot got himself on the scoresheet on the stroke of half-time. The likes of Richard Palframan and the impressive Max Northcote Green set the tone with a series of aggressive carries, before the ball was moved wide to Trayfoot, who found himself in space to cross in the corner. Bell was unable to convert, but Irish were in the ascendancy at 18-7 at the break.

Summer recruit Marshall marked his home debut with a try in the early stages of the second period, Topsy Ojo slicing through Ealing’s defensive line at will to set-up the score. Bell’s radar boot made it 25-7 to Irish, before the number-10 was yellow-carded on 67 minutes for a professional foul at the breakdown. Ealing thought they had made the extra man count immediately through Phil Chesters, but the winger knocked-on over the line.

With the spoils seemingly in the bag for Irish, all that was missing was the try bonus-point and they got their wish when scrum-half Steele sniped his way over the line following a series of drives from the Exiles’ pack. Marshall took over the kicking duties in the absence of Bell to increase the deficit to 32-7.

Ealing had the final say with the last play of the game when hooker Matt Cornish crossed in the far corner, but Irish were the victors to maintain the feel good factor in the Exiles’ ranks.