London Irish is pleased to communicate the success of the London Irish Community team’s summer rugby camps in July and August.

Organising a total of 12 camps across the South-East, the Community team ran a successful summer programme that reached out into new areas and communities.

A brand-new High Performance camp was completed at the Club’s own Hazelwood Centre, Sunbury, along with novel camps at East Grinstead RFC, Drifters, Cranleigh School and Seaford RFC.

The team boasted an incredible record attendance across the two months, breaking previous attendee numbers in a significant milestone achieved by the group.

The objective of the day festivals, which began at the two-day camp in New Milton on 27th July, was to reach out into previously undiscovered areas in order to promote the game of rugby.

Moving into new localities will aid in growing participation in the sport and help young children learning new skills to take back into the community Clubs.

London Irish Head of Community Mathew Heeks conveyed his pride in his team’s efforts and giving children the opportunity to play in their time away from education.

“Thank you to everyone who attended our London Irish rugby camps in the summer, we had record numbers and new venues across August.

“It was amazing to see so many kids playing rugby with smiles on faces and we hope to see you all soon.”

Keep an eye out for the Community October half term camps, Match Day coaching clinics and mascot packages available for all home game on the Premiership Rugby Academy website.

The Community team are available to reach via [email protected] 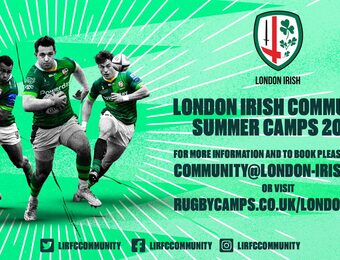