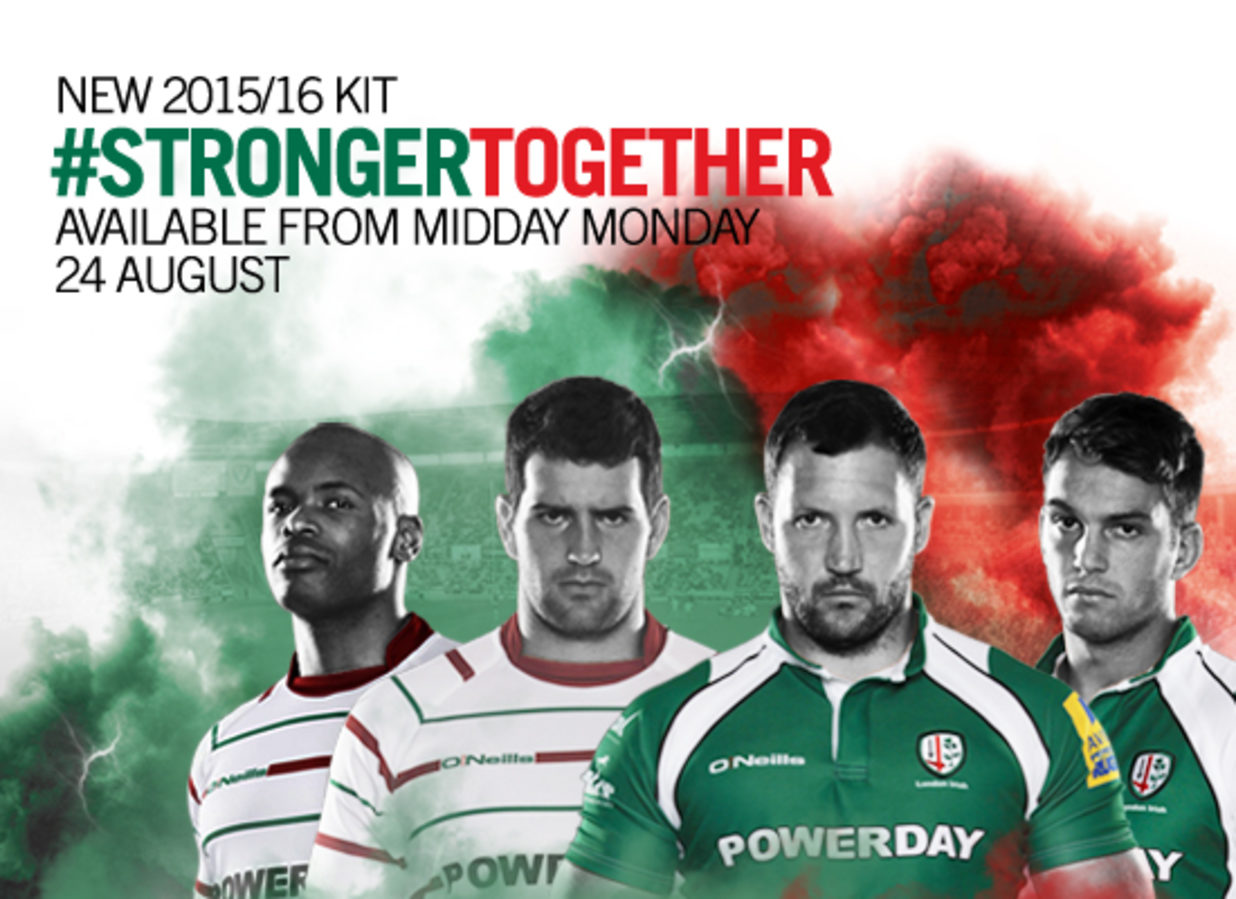 Today sees the official release of the new London Irish home and away O’Neills kit which will be used throughout the 2015/16 season.

The new home kit builds on elements of the kit worn during the 2008/09 season, a year which saw the Exiles into the Premiership final. Bob Casey, London Irish CEO, remembers the pride of wearing that jersey that season with his fellow team mates Nick Kennedy, Paul Hodgson and Declan Danaher. This iconic jersey is at the heart of the 2015/16 home kit design.

The kit is in keeping with tradition and includes iconic green and a white panelling design. The high performance playing jersey features the Club badge and grandad collar. Green shorts and socks accompany the jersey.

The kit will be worn for the first time when London Irish travel to Musgrave Park to play Munster on Friday 28th August.

The away kit is based on the 2015/16 training wear range. The jersey is white with green and burgundy stripes and will be accompanied with white shorts and socks.

In conjunction with this kit launch, the Club has also released its #StrongerTogether campaign which will be carried throughout the season. #StrongerTogether represents the club’s ambition to unite all members of the London Irish family to help achieve success both on and off the pitch.

London Irish winger, Topsy Ojo, who has played for the Club for over 10 years, said: “I really like the home and away kit for this season. The design represents both our past and the direction the Club is heading in, and I think it will prove very popular with our supporters.

“From a playing point of view it is important whenever you take the field you feel comfortable in the kit you are wearing and this is certainly the case.”

Susie Robertson, UK Sales Manager at O’Neills, said: “We have worked very closely with the Club to design a new kit concept that tells the London Irish story of where the Club has been and where it is going – the design remit in year one of our partnership was very specifically to ‘get back to basics’ and, now that we are entering into year two of the supply, we have looked to develop this by maintaining the ‘London Irish green’ with a hint of maroon.  With nearly 100 years of manufacturing and innovation behind us O’Neills, can provide London Irish with the required technical specification on our products to assist the well-being of both player and supporter on and off the pitch. As a result of ongoing consultation with the Club, we will endeavour to continue doing so for the seasons to come.  We’re delighted to be partnering London Irish as their official kit supplier and wish them all the very best for the season ahead.”

Supporters can purchase the new kit online at www.london-irish.com or from the Megastore at Madejski Stadium from this Monday, August 24, Midday.