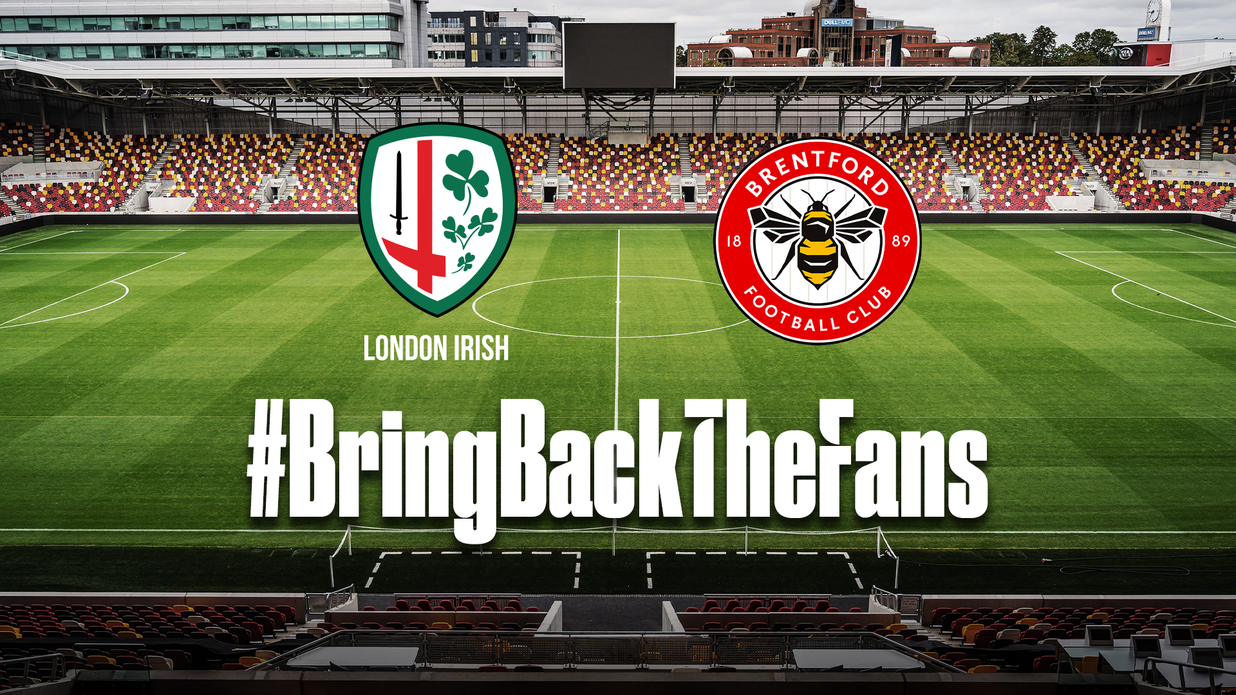 London Irish and Brentford FC have joined forces to back the Evening Standard's 'Bring Back The Fans' campaign.

The Evening Standard launched their campaign last Friday, with widespread support across the capital from a host of Premier League and Football League clubs – and now Irish and Brentford, our new landlords, have come together to show their support.

London Irish CEO, Brian Facer, said: “We are fully supportive of the Evening Standard's campaign to bring back the fans to stadiums – and are delighted to be joining forces with our friends at Brentford FC.

“The pilot events in Premiership Rugby were an unparalleled success, proving that rugby - and other sports for that matter – can make reduced crowds work in the short-term, before we're allowed to welcome back full capacities in the future.

“The power of sport and attending live matches cannot be underestimated. Clubs are one of the biggest supply chains in the local community – a force for good that so many people rely upon. Simply turning the tap off has huge implications for clubs and consumers of all age ranges.

He added: “As a club, we're entering a new chapter of our history by returning to the capital, and the fans are integral to that.

“What we do know is that it's a matter of when, and not if, supporters will be able to come to watch matches, and we continue to work closely with Brentford FC and the relevant authorities to ensure that the plans are in place to welcome our fans, in a safe environment. It goes without saying that the sooner we're able to do that, the better.

“It's not about us, it's not about Brentford – it's about the wider sporting family. When you see other industries given the green light to host events, in particular those inside theatres and cinemas, it makes no sense whatsoever for stadiums to be any different.”

Jon Varney, Brentford FC Chief Executive, said: “We fully support the Evening Standard’s Bring Back The Fans campaign and are delighted to join forces with our friends at London Irish to advocate for supporters being allowed in to our new stadium.

“This is a challenging time for everyone and the safety of all concerned must of course remain as the utmost priority. At the same time, we are confident, based on the behind closed doors games we’ve already held, that we have the expertise and experience to put in place the appropriate social distancing and safety measures to protect fans and staff with the reduced capacities that were being suggested.

“We are very grateful for all the support we’ve had from everyone involved to find a solution to the controlled return of fans. The EFL, Hounslow Council, the Sports Ground Safety Authority, our local Safety Advisory Group, our local MPs and fan groups have all worked with us over the past weeks.

“I hope that by continuing to work together we will be able to safely welcome our fans back to watch live games soon. National organisations elsewhere in Europe, clubs lower down the pyramid and other venues indoors and out have all shown what can be achieved and I hope we can get there as well.”