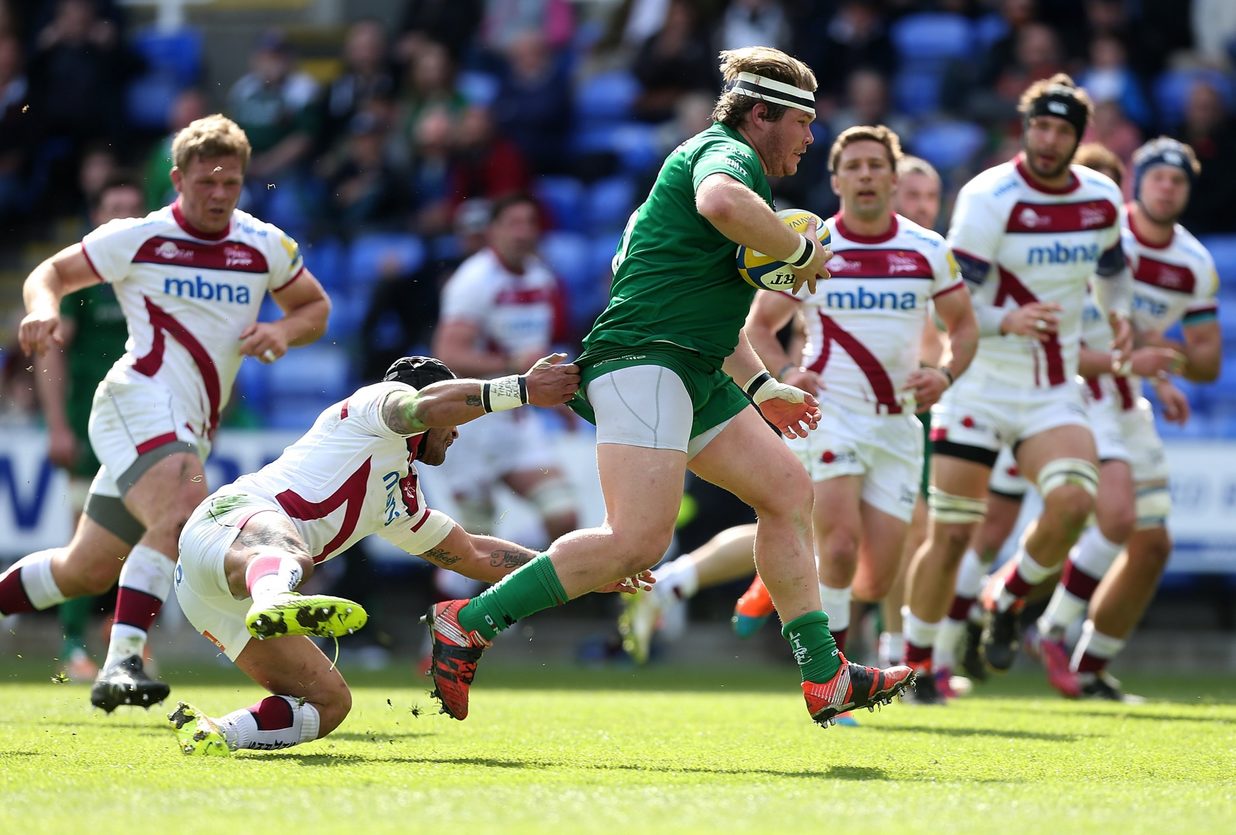 London Irish welcomed Sale Sharks to the Madejski Stadium on Sunday 12th April for their round 19 Aviva Premiership clash.

The Exiles went into the game hoping to put the disappointment of last weekends European Challenge Cup quarter final loss at the hands of Edinburgh behind them, with Glenn Delaney making four changes to his starting line-up.

Among them, young tight head prop Richard Palframan was awarded his first Premiership start and Chris Noakes came in at ten to replace an injured Shane Geraghty.

In a closely contested match it was London Irish who came from behind to claim a 25 – 23 win which sees them just one point below Gloucester in the table.

Sale looked to be taking a 6 – 10 lead into the break thanks to tries from Tom Arscott and Mike Haley. However, it was the quick thinking Andrew Fenby that pounced onto a lose ball and cross the line to steal the lead at half time.

In the second half Arscott crossed again for the visitors but it was a brace of tries from Alex Lewington in three minutes that saw Irish take the win.

The visitors got off to a flying start. They spent the opening three minutes camped in the Irish 22. The first carries saw them crash it up through the pack before letting their backs lose, Tom Arscott finding himself in space and sliding in at the corner. Danny Cipriani was unable to add the extras, leaving the score at 0 – 5.

It wasn’t until the 20-minute mark that Irish got a chance to show their attack. Darren Allinson broke from his 22, starting an attack that got Irish onto the Sale five metre line. This pressure counted for Irish, winning them a simple penalty for Noakes to convert.

With their tails up, Irish got a second penalty minutes later as their pack began to get the upper hand at scrum time. Noakes again converted to take the lead at 6 – 5.

With seven minutes left in the half, Irish were reduced to 14 men with Tom Court sent to the bin. Sharks looked to make the most of their numbers advantage straight away. Opting for the corner they shipped it wide, utilising the overlap for Mike Haley to cross for the try. Cipriani again missed the conversion, leaving the score at 6 – 10.

On the stroke of half time Irish stole the lead. Chris Noakes’ penalty attempt fell short and as Sale attempted to run it out they spilled the ball forward, which Andrew Fenby claimed to sprint away and score. Noakes’ conversions left the score at 13 – 10 at the break.

Four minutes into the second half Sale drew level. After handling the ball on the floor Blair Cowan was sent to the sin bin and gave Cipriani a simple penalty to bring it to 13 – 13.

The Sharks then took the lead ten minutes into the half. After a maul bought them within five metres they let their backs attack, Arscott again finding himself in space out wide to dart over for his second try of the game. Cipriani converted to make it 13 – 20.

The Irish response was swift. Alex Lewington broke away from the restart and with Sale conceding a penalty Noakes went for the corner. The Irish pack mauled their way over the line; referee Greg Macdonald, however, disallowed the try after a TMO referral, sending Chris Cusiter to the bin in the process.

London Irish went again to the corner, this time spreading it wide for Lewington to touch down for his ninth Premiership try of the season. Noakes was unable to convert, leaving them two points behind at 18 – 20.

With 24 minutes left, a fourth player was sent to the bin. This time it was Topsy Ojo for the hosts. Despite being down a man it was Irish who struck next. Lewington showed his pace to get down the wing before cutting inside and stepping past the last man to score under the posts. Noakes converted to extend the lead but a Cipriani penalty soon after made it just a two point game at 25 – 23.

The final plays saw Sale attempting to go from under their own posts to take the win. However, London Irish turned it over and as the clock went red the Exiles’ booted it into touch to claim a hard fought 25 – 23 win.

Next week London Irish travel to the Rec to face Bath on Friday 24th April.