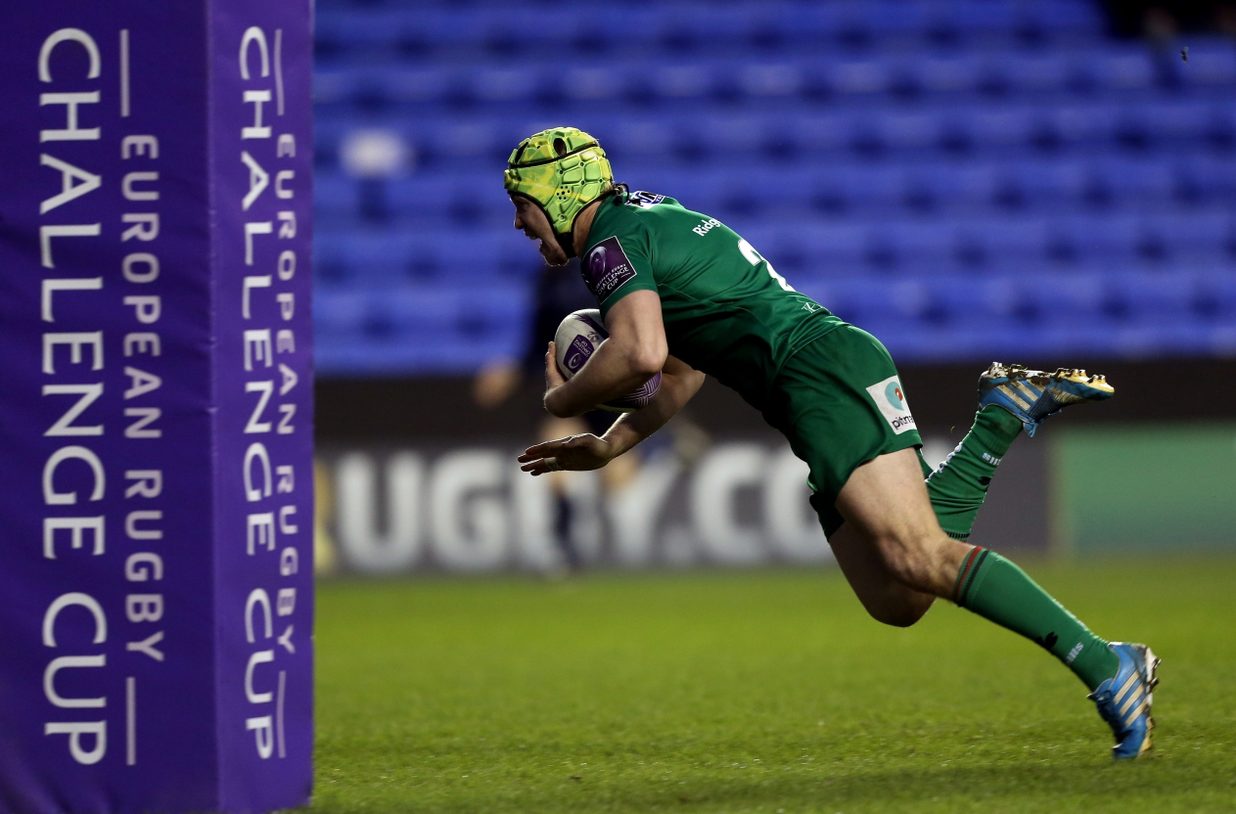 Irish, who were the first side to beat Grenoble on their own patch earlier in the season, came into the game knowing that a win here could put them in pole position in the group.

In a frantic, end-to-end, game of rugby it was London Irish who came out on top, outscoring Grenoble by six tries to four.

The boot of James Hart and Julien Caminati built a strong lead for Grenoble but tries from Alex Lewington,penalty try, Andrew Fenby, Geoff Cross, Tom Guest and a late one from Myles Dorrian saw Irish clinch victory at the death.

The Exiles got off to a flying start. After a winning a penalty Irish went to the corner before spreading it wide, with Andrew Fenby putting Alex Lewington in at the corner. Shane Geraghty was unable to add the conversion, leaving the score at 5 – 0 after three minutes.

Irish scored their second after eight minutes. After Andrew Fenby was held up over the line the pack set to work putting Grenoble’s forwards under pressure and earned themselves a penalty try as they shoved their opposition back over their own line. Geraghty converted to make it 12 – 0.

The Grenoble pack struck back soon after. This time it was their chance to show power up front as they mauled their way over with hooker Lauren Bouchet the man to dot it down. Captain James Hart added the conversion to make it 12 – 7.

Grenoble drew level after 17 minutes. Bouchet intercepted a Lewington pass to sprint away under the posts for his second of the day. And, after two long range penalties from, full-back Julien Caminati and another from Hart, Grenoble took the lead at 12 – 21.

Geraghty closed the gap to six points with a penalty of his own after 28 minutes but a Caminati drop goal moments later cancelled it out and yet another Hart penalty bought the score to 15 – 27.

Irish had the final say of the half. Once again the forwards set up a powerful driving maul and as Fergus Mulchrone and Topsy Ojo added their weight to the maul they rumbled over allowing Guest to score. Geraghty was unable to convert, making the half time score 20 – 27.

Geraghty claimed the first points of the second half, knocking over a simple penalty to make it 23 – 27. And Irish’s strong start to the second half continued with Guest, Fenby and Ofisa Treviranus all making headway and forcing Grenoble into conceding another penalty which Geraghty again converted to bring Irish within one point at 26 – 27.

A third penalty in quick succession saw Grenoble reduced to fourteen men as Jonathon Owen was sent to the sin-bin. And another penalty on their own five metre saw them down to thirteen men as Mahamadou Diaby was also sent to the bin.

Irish were reduced to fourteen men soon after as David Paice was shown a red card. Irish, however, soon made their one-man advantage pay off as they rumbled over another maul and replacement Geoff Cross was the man to score.  Tom Homer was unable to convert, making the score 31 – 27 with twenty minutes left to play.

Grenoble struck back minutes later, firstly with a fast flowing move seeing Caminati finish for the visitors and a second form a maul with Louis Marrou and with the conversions from Hart Grenoble took the lead with the scores at 31 – 41.

Fenby scored for Irish after 74 minutes after the Exiles camped out inside the Grenoble five metre line. Homer was unable to convert, leaving the score at 36 – 41.

With minutes left on the clock and needing a converted try to win Irish won a penalty and kicked deep into Grenoble’s 22. The lineout was over thrown but luckily for Irish, Myles Dorrian was first man to the ball and danced his way through to sprint away and score under the posts. Homer converted to reclaim the lead for Irish and win the game with a final score of 43 – 41.

Next week London Irish travel to Rovigo Delta for their final pool match and will be looking to secure a home quarter final berth.