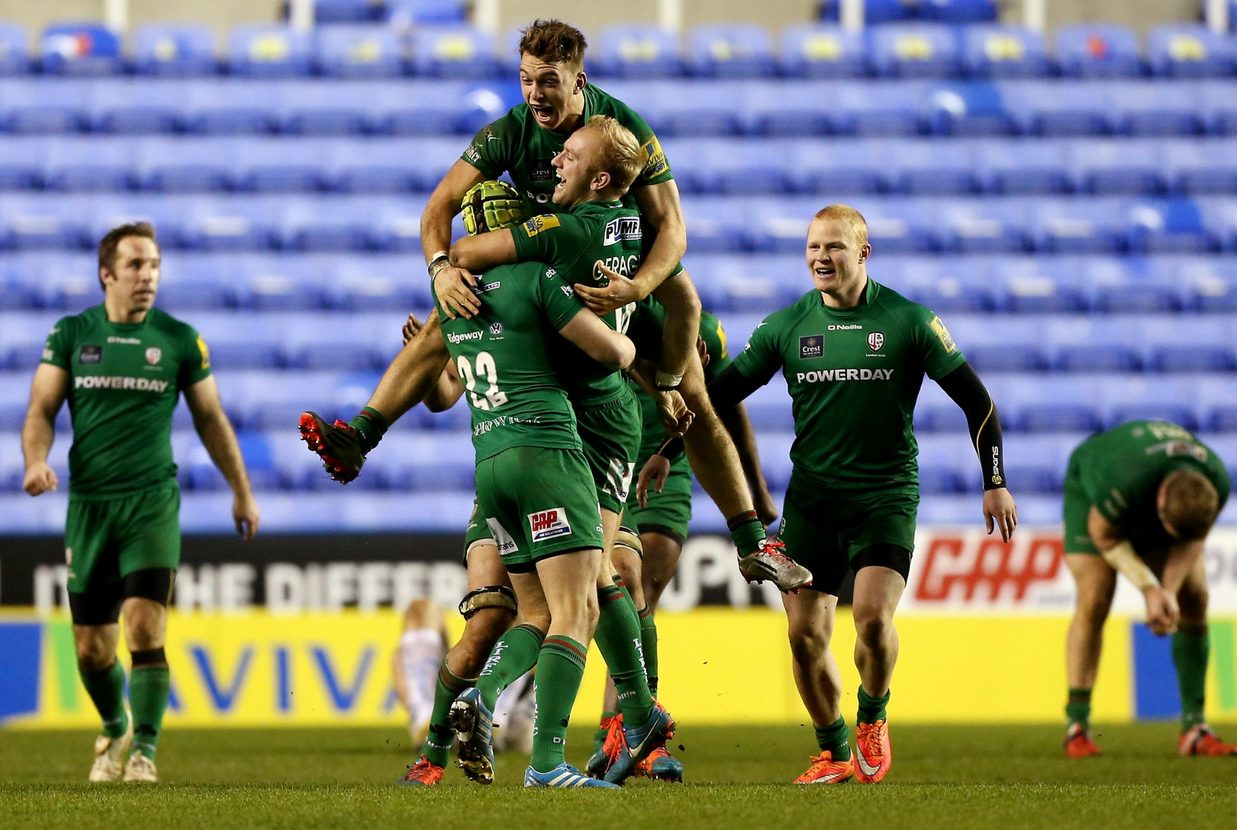 Irish were looking to enact revenge for the defeat they suffered at Sandy Park earlier in the season where the Exiles lost 44 – 24 to the West Country outfit.

Both sides came into the game with point to prove. For Irish, a win over the Chiefs would continue their wining form at home and give them their fourth win of the Premiership this year.

As for Chiefs, after a flying start to the Premiership three defeats in a row had seen them slip down the table and they were be looking to stop the rot and get back to winning after a one point loss to Gloucester at home last week in the West County derby.

Both sides clearly came to play with six tries being scored in this exhilarating match. London Irish outscored Exeter by four tries to two, including a brace from Blair Cowan. Gareth Steenson’s boot kept Exeter in the game and took the lead with three minutes left on the clock.

But, in the final play of the game Shane Geraghty stepped up to land a drop goal and snatch the victory and a vital five points for the Exiles.

After three minutes of play Chiefs got a chance at the first points of the game. Scott Steele cleared the ball from deep in the Exiles’ territory and the Irish chase was a good one. However, the Exiles were penalised at the breakdown but Exeter’s Henry Slade couldn’t capitalise from the tee as he struck the upright.

Twice in the opening fifteen minutes Irish cut Exeter open. First it as a rumbling move that worked it’s way deep into Exeter territory before Jack Nowell snatched up a Shane Geraghty cross-field kick to clear. The second came from London Irish all time top try scorer Topsy Ojo who burst through midfield. Again, however, inaccuracy cost Irish at the key moment when, after spreading it wide off the breakdown, David Paice could not stretch to reach a Geraghty pass and it tumbled into touch.

After twenty minutes Gareth Steenson stepped to give Exeter the lead. After Irish stole a lineout on their own five metre line and cleared well Exeter won a penalty at the breakdown at Steenson duly delivered, making it 0 – 3.

The first try of the game came from Irish’s Blair Cowan. After winning a penalty George Skivington opted for the corner and Geraghty found touch ten metres from the Chiefs’ line. The pack set up the driving maul and drove their way over to take the lead. Geraghty was unable to convert, bringing the scores to 5 – 3 with twelve minutes left of the half.

Steenson reclaimed the lead for the Chiefs with seven minutes left in the half as he made the most of an Irish infringement at scrum time. A Dean Mumm try moments later extended the led further after the Exeter captain crashed over from short range. Steenson added the extras to make it 5 – 13.

The Irish response was a good one. Tom Guest showed his skill in the loose, a deft offloading setting Geraghty and Lewington up the outside. The Exiles rumbled ever closer, Ojo, Guest and Blair Cowan crashing the ball up but Exeter’s scramble defence just got across in time to force the Exiles into touch and bring the half to a close and a chance for all in the ground to catch their breath after an exhilarating opening 40 minutes.

Irish came out of the blocks flying for the second half. Tom Guest had a clear run in after a clever lineout move allowed David Paice to crash the ball up before offloading to Guest who strolled in under the posts from five metres. Geraghty added the simple conversion to close the gap to just one point at 12 – 13 with half an hour to play.

Irish were over the line again moments later. Scott Steele chipped the ball on and Topsy Ojo leaped high to gather. Geraghty then span it wide to Mulchrone who passed it inside to Lewington to crash over and reach out to score. Geraghty couldn’t convert, leaving the soccer at 17 – 13.

Irish claimed the bonus point after 58 minutes. Again Irish retained possession deep inside Exeter territory. Geraghty delivered a flat ball to Cowan who came on the angle to cross for his second and claim an all important bonus point and leave the score at 22 – 13 after Tom Homer was unable to add the extras.

Exeter crossed for their second try five minutes later. This time it was the visitors who camped out on the Irish line before Dave Ewers burrowed his way over from short range and with Steenson’s conversion the score stood at 22 – 20.

After 70 minutes Homer extended the Irish lead to five points with the boot from the halfway. However, after conceding off the restart Steenson closed the gap back to just two points at 25 – 23.

With four minutes to go Irish handed Exeter a chance to take the lead. Irish, penalised at the lineout, gave Steenson a shot at goal which he took making it 25 – 26.

With 30 seconds left on the clock Irish won a penalty deep in their own half. Geraghty drilled it long for the forwards to set up a driving maul. As Irish pushed on into the Chiefs half the stage was set. Geraghty dropped into the pocket, and slotted a last gasp drop goal with the clock in the red to snatch a well deserved and very important bonus-point win for the Exiles.

Now Irish attentions turn back to the European Challenge Cup for the visit of Grenoble next week to the Madejski Stadium on Saturday 17 January and a chance for Irish to secure a home European quarter-final.