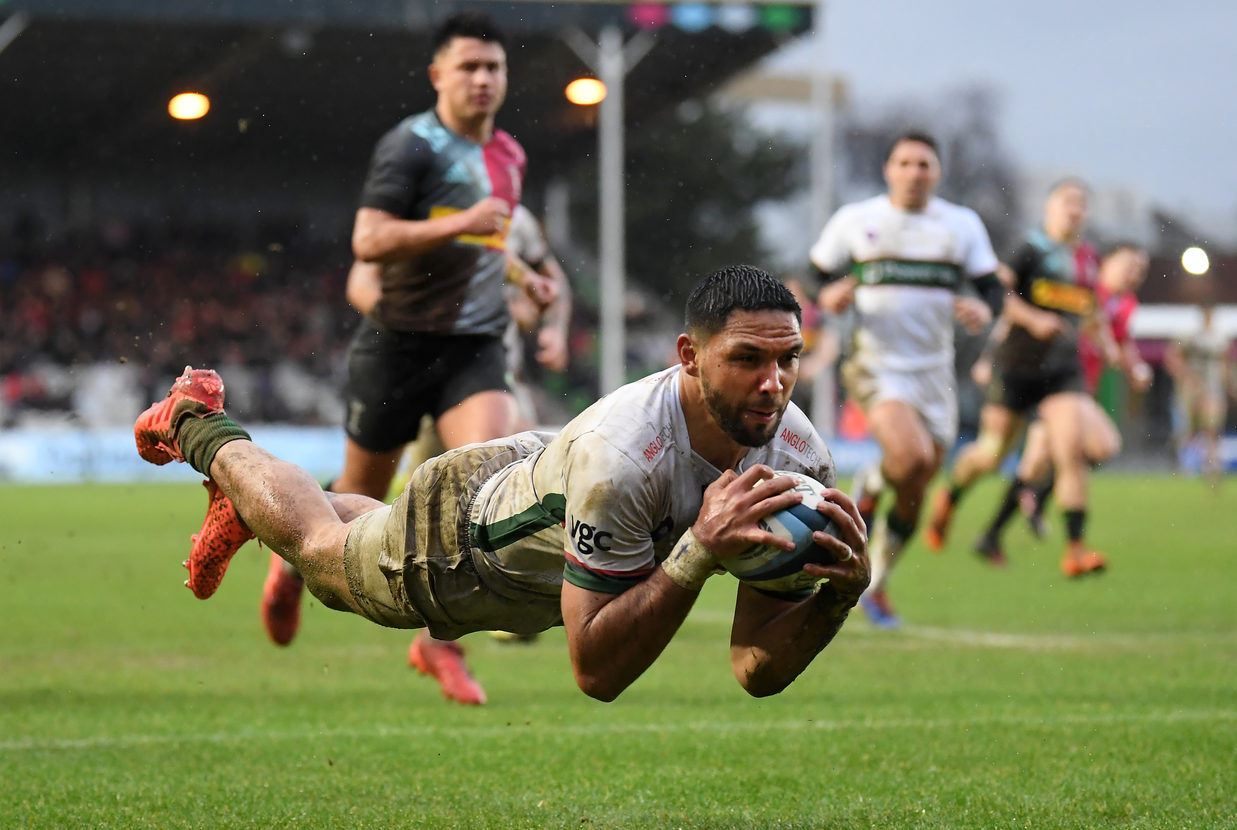 London Irish secured back-to-back away wins in the Gallagher Premiership with a bonus-point win against Harlequins at The Stoop.

The match was played in treacherous conditions in West London, but Irish managed them well, crossing for two tries in each half to secure the victory, with Ollie Hoskins going over in the last minute to make sure Irish walked away with five points.

Matt Rogerson and a brace from Curtis Rona were the other try scorers to go with nine points from the boot of Stephen Myler.

London Irish crossed for the first try of the game after 8 minutes. Stephen Myler put the ball high in the blustery conditions, and it was gathered brilliantly by Ben Donnell, who was a late addition to the starting XV for Blair Cowan who withdrew through sickness. The ball was recycled, and Curtis Rona passed to Matt Rogerson who cut inside the Quins defence and dived over for the try. Myler converted to make it 0-7.

Marcus Smith reduced the deficit with a penalty goal straight in front of the uprights after referee JP Doyle penalised the Exiles for being offside in defence.

Ben Meehan produced a moment of brilliance for his side’s second score. The scrum-half darted from the base of the ruck and drew the full back before passing to Curtis Rona who was over to score. Myler again converted to edge the Exiles further ahead at 3-14.

The hosts thought they were over for their first try of the afternoon, but obstruction in the lead up saw the TMO chalk off Ross Chisholm’s effort.

Stephen Myler had his first penalty attempt of the afternoon go over off the post to give Irish a 3-17 lead at the break.

Quins, with the winds at their backs in the second half, were camped in the Exiles’ 22 for the opening 10 minutes. Resolute defence from Declan Kidney’s side kept the hosts out, but on 51 minutes they were unable to stop Alex Dombrandt powering over after a Danny Care quick-tap. Marcus Smith converted to make it 10-17.

Irish were over for their third of the afternoon against the run of play with Curtis Rona’s work ethic rewarded with a try. From the scrum, Irish opted to initially run the ball before Rona put boot to ball. He chased and was able to charge down Brett Heron’s clearance kick, regather and dive over to the jubilation of the travelling support. Myler added the extras to make it 10-24 with 17 minutes remaining.

Caden Murley crossed for Quins second try with five minutes remaining to set up a tense finale, but Irish had the last say with Ollie Hoskins securing the bonus-point from the back of a rolling maul. Irish finished the winners, 15-29.

It is back to the Madejski Stadium next Saturday where we welcome Gloucester on Saturday 22 February. Please click here for tickets!