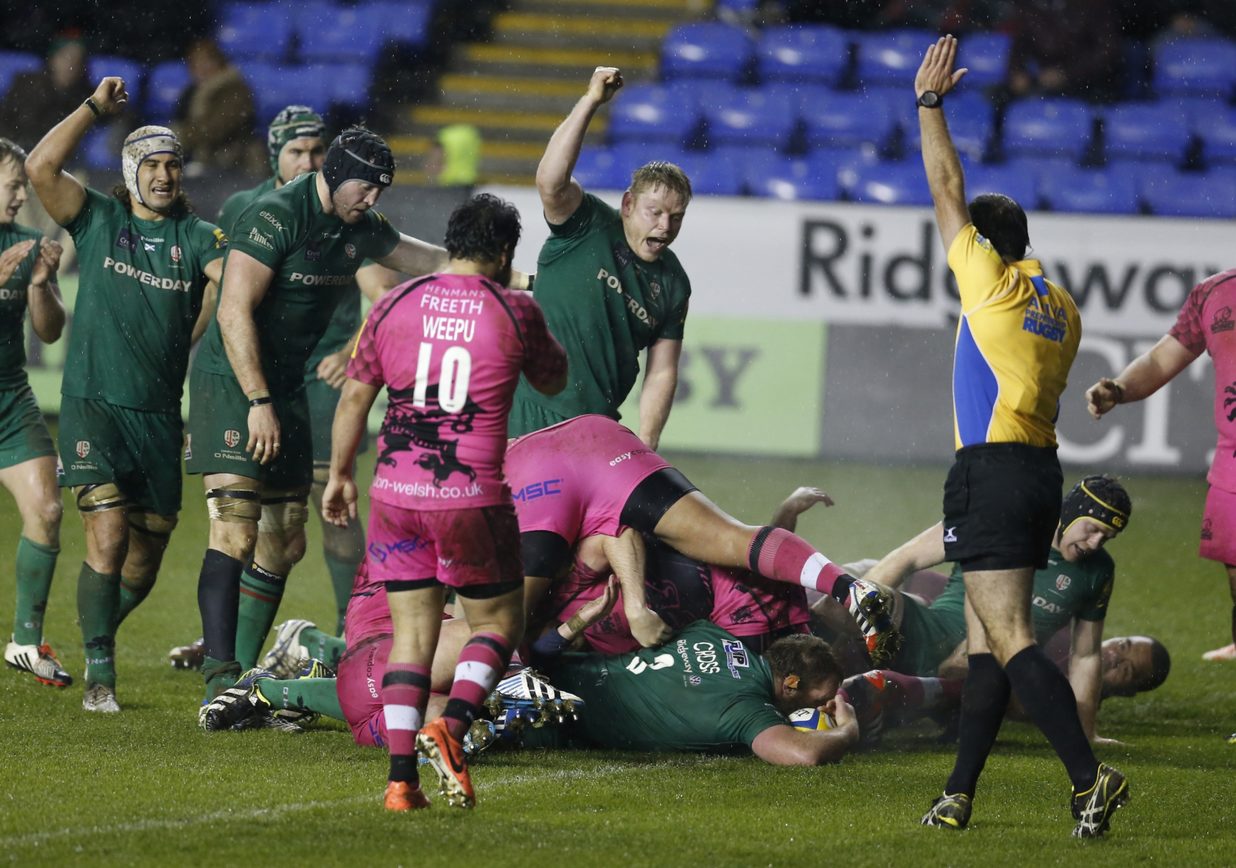 London Irish welcomed London Welsh to the Madejski Stadium on Boxing Day for their Aviva Premiership round 11 clash.

Both sides came into the game needing a win, Irish having won one of their last six games and Welsh looking for their first win of the season.

A torrential downpour throughout the game saw greasy conditions, resulting in a largely forward dominated game. Irish ran in three tries in all, one in the closely contested first half before they pulled away thanks to an impressive forwards display in the second half.

Tries from Alex Lewington, Geoff Cross and Tom Court, with nine points from the boot of Tom Homer saw London Irish run out 24 – 9 winners in front of nearly 8,000 supporters.

A shower before kick-off left both sides looking for territory in the opening periods of the game as they battled the greasy conditions. Irish had two chances to take the lead but Tom Homer was unable to covert.

Welsh, however, when given their chance made no mistakes. After fifteen minutes they won a penalty a metre inside the Irish half and full back Will Robinson stepped up to give Welsh a 0 – 3 lead.

After twenty-five minutes Homer turned Irish pressure into points. After Welsh were penalised for a high tackle the full back this time was able to convert, bringing the score to 3 – 3.

Irish scored the first try after half an hour. Chris Noakes chipped over the defence and Fergus Mulchrone collected and powered his way down the touchline. The centre then offloaded inside to Alex Lewington who stepped the last man to score. Homer added the conversion to make the score 10 – 3.

After 35 minutes both sides were reduced to fourteen men, Dan Leo and Tom May both receiving red cards after an altercation at the breakdown. Welsh, off the resulting penalty, closed the gap. Robinson knocked over a simple penalty to make the score 10 – 6 with two minutes left in the half.

Irish had a try disallowed on the stroke of half time. After Geraghty chipped the ball over the Welsh defence Topsy Ojo collected to sprint under the posts. However, referee Greg Garner, deemed him to be offside, leaving the half time score at 10 – 6.

Geoff Cross was the man to get the first points of the second half. After Irish camped out on the Welsh five metre line the prop crashed over from short range for his third try in four games. Homer added the extras to make it 17 – 6.

Welsh closed the gap after 60 minutes. After Irish were penalised deep in their own territory Robinson duly delivered again, bringing the score to 17 – 9.

However, as the Irish pack began to assert their dominance at the maul the pack crossed for their second try. This time it was Tom Court who dotted the ball down after the Irish pack rumbled their way over off a lineout. Homer added the extras to make it 24 – 9 with just over ten minutes left.

The final plays saw both sides throwing everything at each other. The game broke into a string frantic half break as possession changed hands multiple times. The final play saw Irish go for a 100 metre try in search of the bonus point but Welsh dragged them down and the final whistle went as Irish touched it down behind their own line leaving the score 24 – 9.

Irish will hope they can build on this win as they look to their trip to Allianz Park when they visit Saracens on Saturday 3 January 2015.