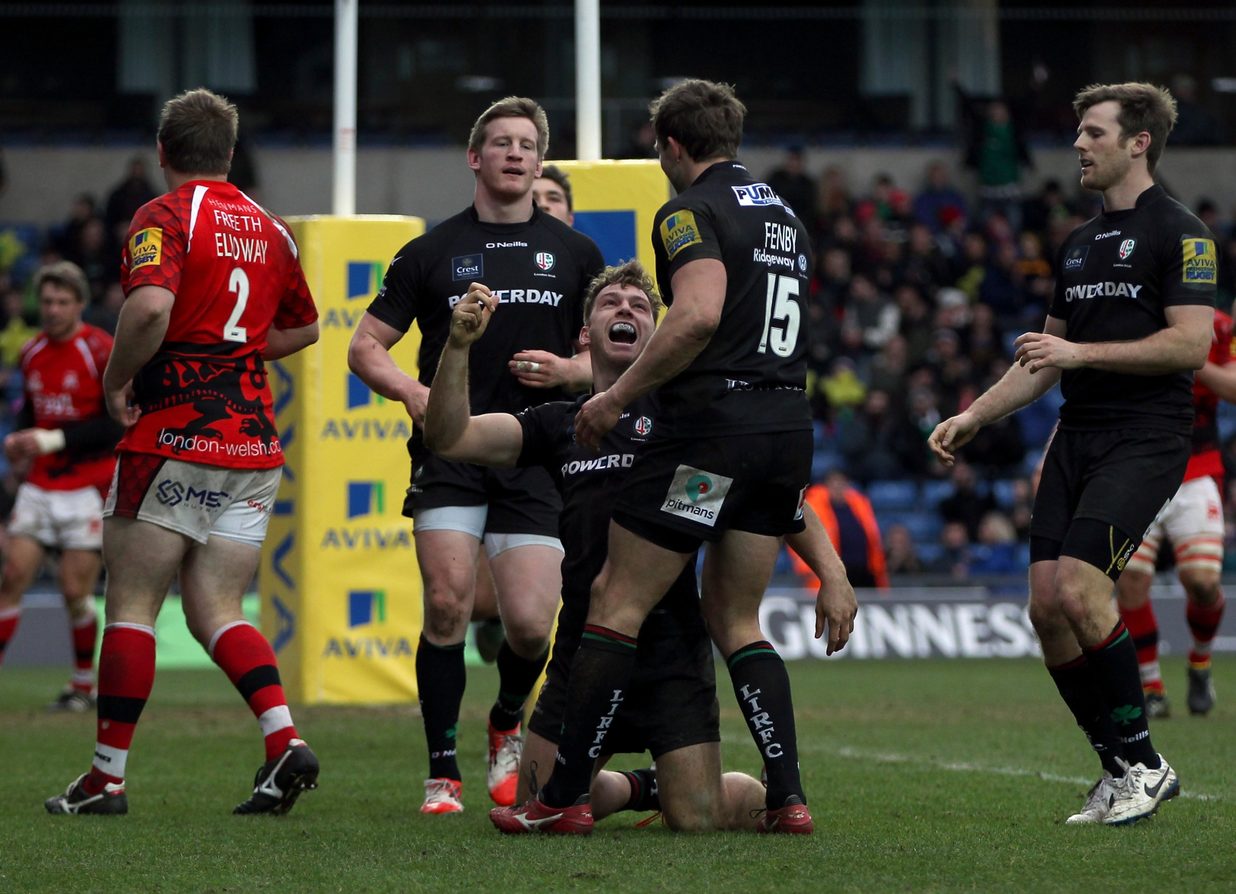 London Irish put 50 points past their Exiles' rivals this afternoon scoring eight tries including a hatrick for Alex Lewington.

A Shane Geraghty brace and one each from Tom Fowlie, Matt Parr and Andrew Fenby, along with the Lewington hatrick ensured Irish put 50 points on the scoreboard.

London Irish travelled to the Kassam Stadium to play London Welsh in the Round 16 Aviva Premiership encounter looking for their second victory over the Welsh this season.

Glenn Delaney made four changes for the match with Matt Parr, Leo Halavatau and Nic Rouse starting in the pack and James Short gaining a starting berth on the wing for the injured Topsy Ojo.

The Exiles made a bright start to the match scoring two tries in the opening seven minutes. Alex Lewington was first across the whitewash, finishing well after great initial link work between the forwards and backs. Tom Fowlie, who was prominent throughout the move, passed to Andrew Fenby who fed Lewington who bustled his way over.

Moments later Fowlie sprinted clear for his sides second score. Welsh fly half, Will Robinson, forced a long pass off his right hand which was well pressured by Conor Gilsenan. The Irish flanker was first to the ball and hacked clear for Fowlie to chase. The young centre had the ball sit up for him and he had the simplest of run ins.

Credit to the hosts as they hit back immediately. Their Tongan number 8 Opeti Fonua cut a line straight through the Irish midfield before drawing the full back and passing to James Tincknell who scored under the posts. Robinson's conversion made it a three point game at 7-10.

The tries kept coming and the third Irish try was neatly finished by Shane Geraghty after 18 minutes. The fly half was having a superb game, continuously taking the ball to the Welsh line. The Irish Exiles worked the flanks and when the opportunity arrived, Geraghty stepped inside the hosts defence and dotted down under the posts. He converted to make it 7-17 to London Irish.

The bonus point was secured with 11 minutes of the first half remaining in a move not to dissimilar to the try scored by Myles Dorrian against Grenoble at Madejski Stadium. David Paice over-threw the line out and it fell fortuitously for Geraghty who had his second score.

There was still time for two more tries before the break, firstly Matt Parr was driven over from a well executed driving maul and then on the stroke of half time Andrew Fenby was the recipient of  a Lewington pass, after the winger had made a brilliant break, to score under the sticks. Geraghty converted both tries to make it 7-38 at the break.

The Irish coaching team rung the changes at half time with Chris Noakes returning from injury to replace Shane Gergahty and Darren Allinson replacing Scott Steele.

The seventh Irish try was scored after 47 minutes and made by great defensive work by Tom Guest at the breakdown. The number 8 decimated the ruck and picked the ball up before offloading to Alex Lewington to sprint clear for his second try.

The spirited Welsh outfit perservered and were rewarded with a Taione Vea try on 54 minutes.

The referee's whistle dominated the remanding 25 minutes, stunting the flow of the contest. However there was still time for Alex Lewington to score his hatrick a minute from the end with a weaving run, beating two defenders in the process to bring up 50 points.

London Irish travel to the Stoop next Saturday to play Harlequins.