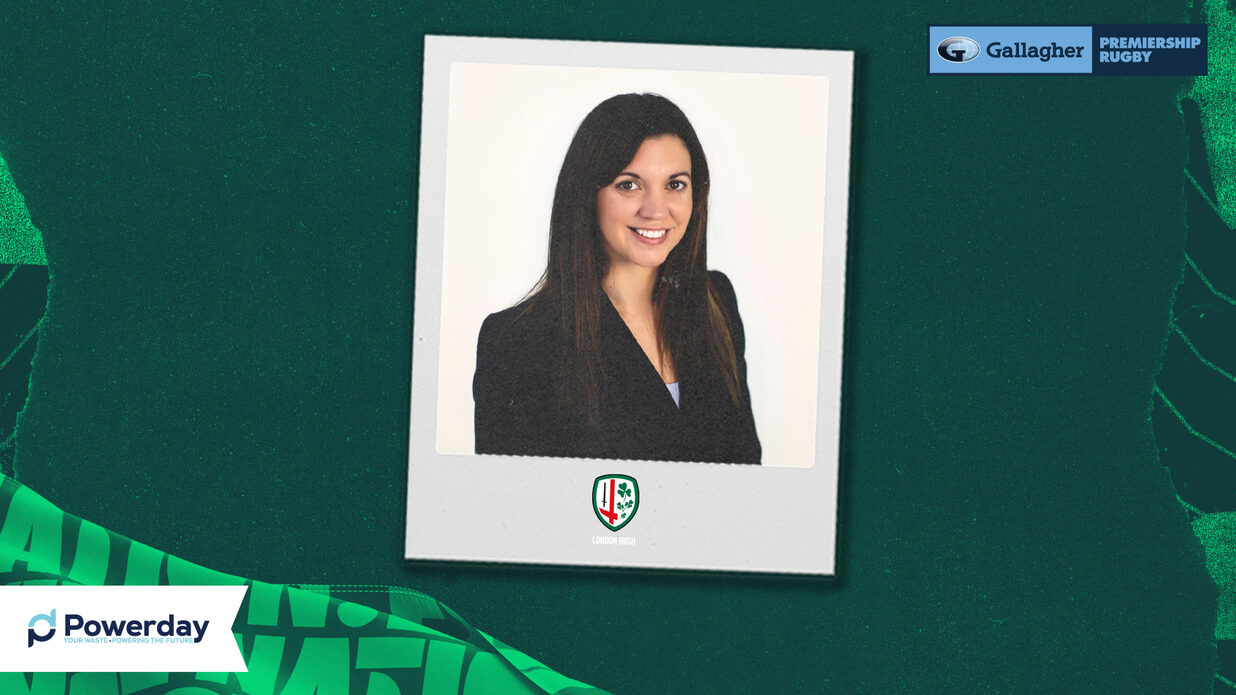 To celebrate International Women’s Day this year, it seem appropriate to sit down for a chat with one of the many talented individuals in the London Irish off-field team – Jean O’Grady.

Jean, the Business Development Manager at London Irish, has always had a passion for rugby and her career so far has seen the natural alignment between business and pleasure.

Jean joined the Club in early 2020 from Connacht Rugby and has had an interesting career so far at the Exiles. But, before we got into that, we asked Jean to take us right back to the beginning of her professional journey.

“My professional career started in 2005, wow that’s a long time ago, with the Radisson Hotel Group” said Jean.

“I was a Reservations Agent there for a few years, before getting promoted to be a Group Supervisor, and then Events Sales Supervisor which meant I was looking after more large-scale events like weddings and conferences.

“So, for the first 12 years of my career, I was working in the hospitality industry. The IRFU and Connacht Rugby stayed with us a few times, and that was my first slight involvement with rugby and made me realise that it was an area that I would love to work in.”

That was the first taste of rugby in a professional environment for Jean, and she soon had the opportunity to move into the sport.

“One day on LinkedIn, I saw a position going for Business Service Executive at Connacht Rugby. I applied and didn’t think too much of it but ended up getting the role and started there in 2017. I absolutely loved my time with Connacht, and that got me into the world of sport.

“I always loved rugby, more so than any other sport. I fell in love with the sport in 1995, watching Jonah Lomu in the Rugby World Cup. I just couldn’t get over the fact that this guy just had people bouncing off him!

“Myself and my dad would always sit down to watch rugby, and still do which I love. My move into rugby happened very organically, I never chased it in particular, but everything happens for a reason.”

For anyone that knows Jean, they will know that she will always hold a place for Connacht Rugby close to her heart (she is often seen still donning a Connacht Rugby branded woolly hat around the office or on zoom calls), so she had no problem explaining why she enjoyed her time at the Irish Club.

“My time at Connacht really was fantastic. My sisters used to always say ‘If Carlsberg did jobs….’ it would’ve been my role. It had a very family and community feel to the organisation and that is down to the amazing people that work there.

“There are a lot of strong women working there, which is where I met some really inspirational people. Rugby is quite a male dominated sport, but at Connacht it was the first time I saw a woman in a senior role in rugby, Niamh Hoyne the Chief Financial Officer. When I joined, the incoming Vice President was also a woman, so I found that quite inspirational.

“Over the last few years, I have managed to meet some inspirational women in sport. Ann Heneghan, now the Connacht Rugby President, is an absolute inspiration to me as the first female president of an Irish club. Another that I admire is Maggie Alphonsi, mainly because of the number of challenges that she’s come up against and the way she has conducted herself. It is frustrating that a woman as experienced and qualified as Maggie has to justify her seat at the table.”

Making the move from Ireland to England wasn’t an easy one for Jean, but she has hit the ground running and is enjoying herself, as she went on to explain.

“When I decided to move over to London, I knew that I wanted to stay in rugby. Once you get a taste of working in rugby, or any sport, it’s very hard to leave! When you love rugby as much as I do, you don’t really see it as work.

“When I moved to London Irish, I knew there would be no other club that I would want to work for. I wouldn’t have that same passion as I do for London Irish, so it was definitely meant to be.

“When I arrived at London Irish, it had the same ‘family feel’ to it and all the staff made me feel very welcome. Although it’s a very unusual year to start a new job, in a new country, with everything that has been happening, it’s been fantastic.

“London Irish would be the ‘Connacht of the Premiership’. For me, there are a lot of similarities between the two clubs. The unity of the club and the brotherhood that you see and hear about at London Irish, is also there at Connacht. The players, staff and supporters from both clubs have a real pride in where they come from and in their performances.”

With Jean starting work at London Irish in the early stages of 2020, she has now spent more time working from home than she has at Hazelwood Centre, where the off-field team and rugby department are based, owing to the Covid-19 pandemic. She sees this as one of the challenges of the move over from Ireland but isn’t feeling sorry for herself!

“I definitely miss working in the office. I think that’s how you get to know people, the squad and the coaches a bit better. I’m living in one of the most vibrant cities in the world, and I can’t do anything or go anywhere!

“Lots of people have it a lot worse than I do, so of course I don’t want to sound ungrateful. I have a great job, live in a brilliant city, and can’t wait for things to get back to normal so that I can start to go and see some shows, museums and galleries, go to the pubs and everything like that. There is light at the end of the tunnel, and I think everyone is getting a bit more optimistic about the prospect of a bit more of a ‘normal’ summer, so I’m staying positive about that.”

The national lockdowns gave some people more time on their hands than ever had before. Jean saw this as an opportunity to start the social media accounts ‘Women in Rugby’.

“During the lockdown last year, I had a lot of time on my hands, so I decided to do something with it. There are so many inspirational women and men working in the sport, but I wanted to start championing the women in rugby and advocate for a greater representation of women at a higher level.

“Rugby is a male dominated sport, but things are changing. I think when we see more women on the boards of rugby clubs, we will see more development for women’s rugby, and we will start to see more women work in the sport.

“My reasoning behind starting the Women in Rugby accounts is to highlight and encourage this. Whether it be at CEO level, playing, coaching, refereeing or media, I want to show the avenues for a career in rugby for women.”

The passion was clear to see from Jean as she went through her explanations and reasonings behind her social media accounts ‘Women in Rugby’, and she continued by breaking down the importance that women could hold if in high positions in rugby.

“I absolutely think that having women in high positions in rugby can help grow the sport. However, I don’t want it to be a quota or a ‘box tick’ exercise.

“A woman should reach the position on their own merit, on her experience, because she is the best person for the role. Things are changing in rugby, but I think so much more can be done. I personally think that women can bring a different point of view, a different aspect and different ideas to the sport.

In her creation of ‘Women in Rugby’, Jean has started hosting zoom calls with prominent women that are already in the world of rugby.

“Recently I was joined on a zoom call with a number of brilliant women who are involved in rugby. We had Cliodhna Judge, a barrister but also sits on the London Irish Foundation board, Katie Smith, a Sports Litigator and used to play rugby, Sara Cox, the professional referee for the RFU, and Zainab Alema, who is a neo natal nurse and a rugby player.

“I reached out to these ladies to see if they would mind being on an advisory board to help push the messages out, and they were all very happy to do so and loved the idea. It was a great opportunity to get their feedback, expertise and recommendations for the next step.

“It was amazing to listen to their stories and to work out the challenges that we could face when pushing out the positive messaging about getting more women thinking about careers in sport.

“The main reasoning behind ‘Women in Rugby’ isn’t to highlight or blame anyone for the lack of female representation, because there is so much that is good happening in rugby. Over the last couple of years, there has been huge strides forward in better representation of women in rugby.

“That really does have to be applauded. ‘Women in Rugby’ is more to educate and to help. I would love to have discussions with governing bodies and see how we could work together to see how we could implement more changes for the better, understand the processes better. I know this won’t happen overnight, but I want to make sure that we get more women in higher positions, but also make sure that anyone who gets there, deserves it and has got there on their own merit.

“There are many ways that the voices of experience women can help in rugby, those experiences might not come from within sport, but they can certainly add lots of value to these roles.”

Finishing the interview by touching upon the future of London Irish, Jean holds the same excitement shared by supporters and staff alike when thinking about the Club’s prospects.

“I am so excited about the potential of London Irish. It came up on Instagram recently that it was a year ago since our last game in Reading without any social distancing rules or masks for supporters. That just made me all the more excited to get supporters to Brentford.

“Everyone who comes to our new stadium says how amazing it is and the commentators on BT Sport are always saying something positive about it, and it really is true.

“We can’t wait to get people back in the stand so that they can experience what has been talked about for what seems like ages! I know the atmosphere will be absolutely incredible.

“Our first priority is to make sure that the return of supporters is done safely, and we are doing everything to ensure this, but if we get a taste of some supporters back in June, I’m sure the Season Tickets will fly out the door when we can get them on sale!”

We’ve got an amazing group of staff at London Irish. But today is International Women’s Day, so let’s shout out….