‘I couldn’t imagine a better position to be in as a young player’: Ed Scragg and Josh Caulfield’s first chat as Exiles

Ed Scragg and Josh Caulfield have praised the environment they have recently entered at Hazelwood as a double signing from Championship side Cornish Pirates.

The lock pairing were confirmed as London Irish players in late June this year, fresh from another challenging campaign in Penzance where the Cornish side finished third in the second tier of English rugby.

With Scragg completing his first year in red, Caulfield (three years senior of his contemporary), comparatively spent over five years representing his local side whilst also being registered for Gallagher Premiership Club, Exeter Chiefs.

The task of making the step up as first tier operators is unique to the differing backgrounds of Irish’s new signings, but life at Hazelwood has levelled the playing field for the new boys.

“The lads have been incredibly welcoming to myself and Josh since we’ve arrived from Cornwall, it is a different environment to what we’re used to, but I feel as though we have taken to life in London well,” Scragg said.

“My time with Pirates done me the world of good and has bridged that gap from an Academy set-up with Dragons to train with senior boys.

“Working at Hazelwood is a pleasure and these past eight weeks or so have been everything I have hoped for and more at Irish.”

“The situation from Pirates to here is distinct, the facilities are really impressive and the food is great too, the training is tough and the recovery suites are excellent.

“After going on loan to Pirates I signed on there permanently in the final two years of my stay, and having that constant rugby and playing 80 minutes most weeks has been massive for me in bringing my minutes up on the field, helping me grow as a player and getting me to where I am today.

“I was down there and bought into their project for a few years, it’s where my family are from so it’s an incredible honour to say I have played over 100 times for a local Club in the Championship.

“When I left Exeter I didn’t really feel as though I fully accepted I was leaving and still felt I had more to offer so hopefully now having gone and played a lot of rugby, I can return now and bring that to London Irish which is really exciting.”

With both complimentary to their former employers in respects to the maturity and experience gained from their time in Cornwall, the rarity of dual recruitment from one Club to another would have sparked interest amongst the Exile Nation.

The duo shed light on the story behind the weeks leading up to their journey up the A30 to their arrival in west London.

“It was quite a mental couple of weeks,” Caulfield elucidates.

“We both knew around the same time, and we both figured out that we both got the same call about a week apart.”

Scragg adds: “My housemate was really good mates with Josh and was sort of the go-between, he figured out that we were both in touch with the Club at the same time and sure enough, we signed on about a week apart.”

“We both got chatting and signed quite early, and we were both looking forward to just getting up here after finishing off our season with Pirates well,” the 25-year-old states.

“Having the opportunity to win it at the end but losing a vital game against Ealing Trailfinders was gutting, but once that was out of the way I concentrated on getting my body right in order to impress at Irish.” 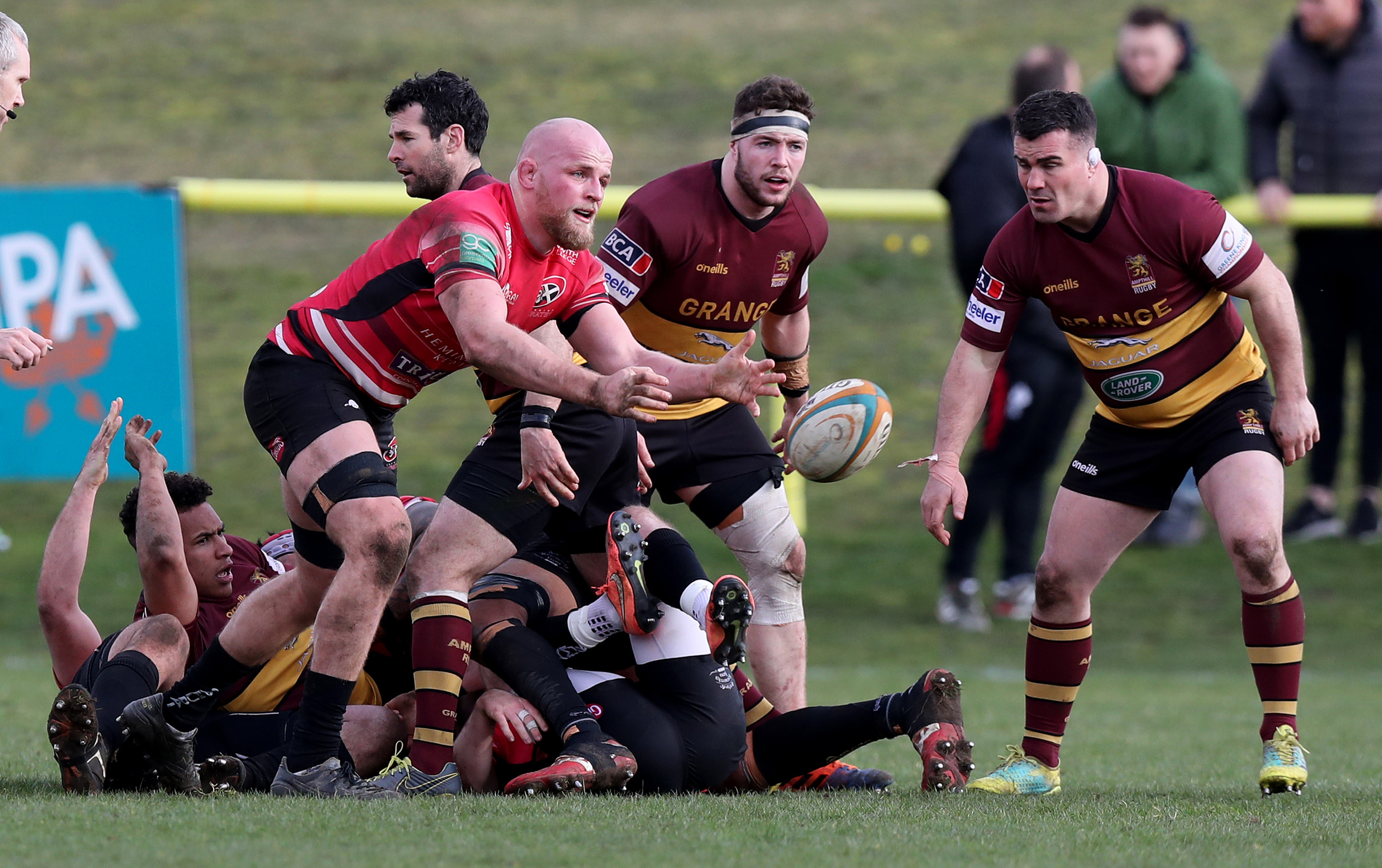 “We got on really well at Pirates, but I’d definitely say our friendship has grown as a result of us coming here,” Caulfield maintains.

The geographical displacement of the forwards, who boast a strong friendship, has naturally thrown up some fresh tasks to overcome away from Hazelwood as a new life beckoned in London.

Life at London Irish will not be alien to Caulfield however, who was involved in Irish’s EPDG in the bronze, silver and gold groups from around the ages of 13 to 16 and represented Irish in the under-15s tournaments at Harrow back when the Club was located at The Avenue.

Nevertheless, such collaborative effort hints that a solid off-field partnership could eventually translate further onto the Gtech Community Stadium pitch.

“Ed was really helpful in helping me and my family, whether that be in the move to the new house, with my daughter Poppy or just taking the dog around the block.”

“Josh had been at Pirates longer than me and his friendships where established when I arrived, I was closer to boys I knew from university but since coming here we do talk a lot on the phone and help each other out where we can.

“We talk about rugby and life outside of it, how the offseason is going and how we are getting on here.”

“A few panic calls about getting ready for pre-season too!” the former joked.

A sense of familiarity, this time surrounding Scragg, sees the Cardiff Metropolitan University graduate link up with a former teammate at Irish.

“I had a lot of experience playing with Tom Pearson, it was brilliant but playing with a university side is different to the Championship and the tournaments Irish operate in.

“The style was good, fast rugby and helped me develop in my game time at a really important time of 18 to 20-years-old.

“The whole experience was incredibly positive, I’m still in touch with a lot of the players and coaches and I reflect really fondly on my time there.

“Tom had a hell of a season and I’d be hesitant to draw any comparisons, he’s been around England camps and has grasped his opportunities fully so full credit to him.”

The narrative of Championship players being welcomed into a side competing in the Heineken Champions Cup this term will warm the hearts, as well as being a just reward for the efforts of the new acquisitions.

Both Scragg and Caulfield were keen to acknowledge how their time in the ranks of Cornish Pirates will help conquer the tough task, albeit a prospect both are keenly looking forward to.

“As a rugby player and a sportsman, all you want to do is challenge yourself at the top level,” Caulfield voiced.

“There is a big difference, but starting out and using the Championship as a base means you don’t forget about how it helped you to get to this level and how it can help you in times like these in pre-season.

“As much as it is quicker here at Irish than we are used to, these eight weeks have bedded us in well for the upcoming season and the Champions Cup games will come around quickly.”

“The Championship at its core dynamic is different to the level there is at the Champions Cup,” Scragg contributed.

“There’s a big emphasis on the set-piece in the Championship above all else, a lot of scrums and a lot of mauls, so making a move into a tournament like that will concentrate efforts on those mentioned factors, as well as all other assets of the game.”

Working alongside players like Adam Coleman and Rob Simmons, who have 140 caps for the Wallabies between them, has been a pleasure as much as a learning experience for the new intake to Hazelwood.

Caulfield’s heritage can be traced back to Athlone, Co. Westmeath through his grandmother with the family having a split international allegiance between himself, a capped England under-20s lock, and his brother, a former Ireland under-20s player.

Former Wales under-20 player Ed Scragg, who admits full efforts are concentrated on work for the Exiles and international representation for himself is out of focus for the time being, is still reaping the rewards of the senior Australian tutorship.

“It was a big attractive factor for me coming here to be honest, being able to pick their brains on different parts of the game has been fantastic.

“Adam [Coleman] has helped me out a lot with little intricacies around the maul, having their level of knowledge on tap is more than ideal.

“It’s not just on the pitch too, outside of rugby learning about their lifestyle and how they see and analyse the game is another big learning for me- I couldn’t imagine a better position to be in as a young player.”

Gaining a fresh set of perspectives on each other’s approach to rugby through Irish’s backroom staff has already seen the boys’ game prosper.

The meticulous approach outside of gametime this summer has introduced the former Pirates to a thorough Exiles coaching set-up in the last two months.

Both capable second-row players, former England under-20 man Caulfield is also adept in plying his trade amongst Irish’s array of loose forwards, and the pair have explored ways in which they can add to the Exiles squad when the season recommences in a matter of weeks.

“It’s early days, but taking in how Irish play and learning off the back of that what gaps you can try and fill is my challenge, and is one I’m savouring,” Scragg analysed.

“I feel like I have benefitted from the resources and coaches, even in the short amount of time I’ve had here- how quickly I can now read the game through the training intensity, it really has gone through the roof.

“I did learn a lot from Pirates in the traditional ways that they train with a lot of emphasis on reps in different facets of the game, and I feel as though my development has increased since I have come here so I’m excited to see how it’s going to go here with the Club.”

Caulfield appended: “I feel like I have definitely picked up my game since coming here, having not played a game yet it is difficult to fully judge but in training the amount of coaches and different sessions you do is great.

“Whether that be skills sessions, breakdown and ground work sessions you can do or coaches you can talk to, it’s all there to make you become a better player.

“Here, we have our own coaches that we report to where we can talk about our ‘work-ons’ and our goals too, so that’s massive for me.

“Coming from the Championship, which is a very physical league, there is a focus on the set-piece which is also something I really pride myself on and something I hope I can offer in abundance.

“Having come to London Irish, we have been improving our game and there may be other aspects where we can step forward and challenge for a green shirt.”

Be there at the Gtech Community Stadium this season to witness Ed Scragg and Josh Caulfield’s first campaign for Irish with a Season Ticket, available to purchase here.