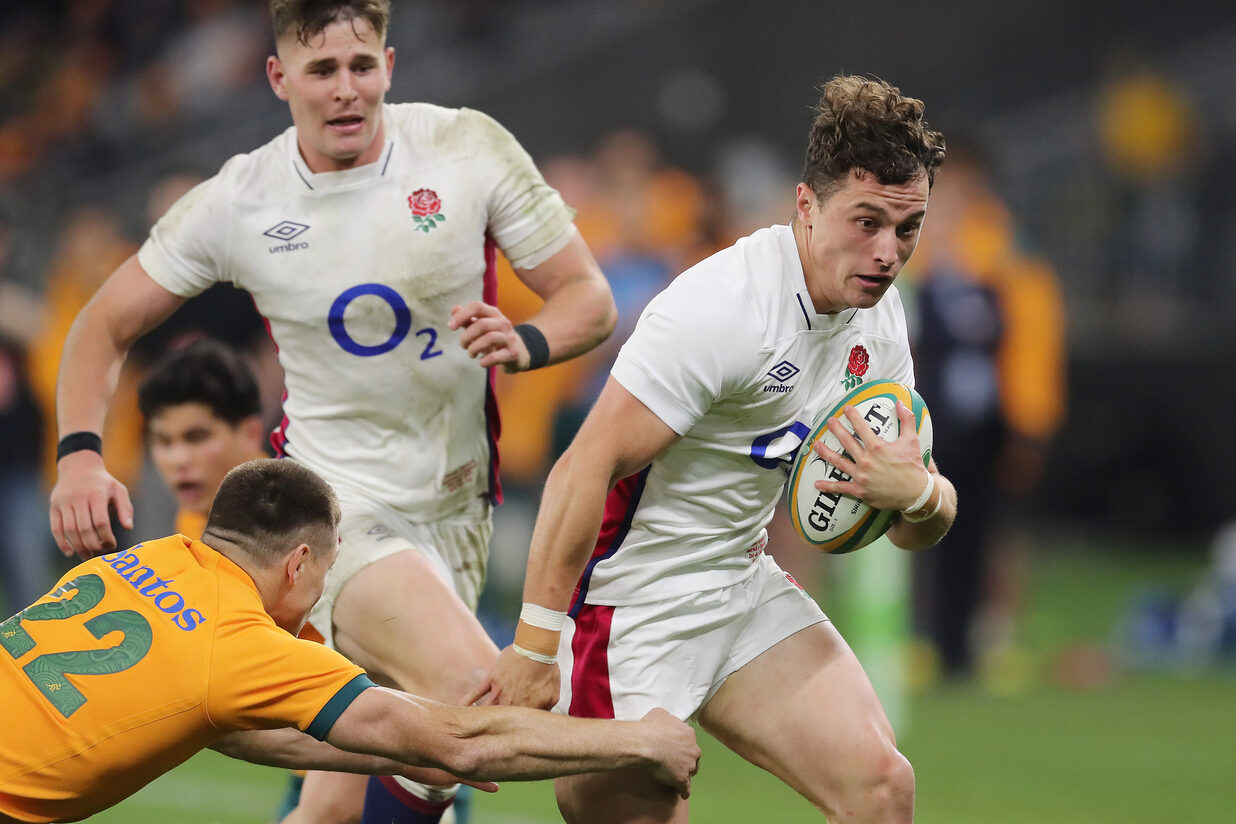 London Irish Senior Academy graduate Henry Arundell had a scoring international debut for England in Perth during their first test match of the series against Australia.

He made history as the first Exile to be capped by England since Marland Yarde against the All Blacks in 2014.

Coming on for former Exile Joe Cokanasiga with seven minutes remaining, the 19-year-old full-back wasted no time in introducing himself on the world stage with yet another sensational solo effort with his first touch of the ball.

Eddie Jones’ side were sixteen points behind with a minute to go, playing out from a ruck outside the Australia 22 with the ball being worked wide to the left wing.

Neat hands from Harlequins’ Joe Marchant pushed the ball to Freddie Steward of Leicester Tigers on the 10-metre line, then passing to Arundell who had it all to do with two Wallaby bodies in front of him.

Arundell cruised past the dual tackle of Andrew Kellaway and Noah Lolesio, side-stepping another former resident of Reading James O’Connor to dot down in the corner despite the best efforts of recovering Samu Kerevi.

With his first touch Henry Arundell proves too powerful in contact to power down the wing and go over! 💪 #AUSvENG pic.twitter.com/CqjiCHgrfg

As well as making two tackles, Arundell’s 54 metres made in two carries were the most of any English player in the whole game.

He beat four defenders (the second most of any England player) and was close to a second score in the closing stages, penetrating the Australian rearguard but was stopped short of the line as fellow debutant Jack van Poortvliet crossed soon after.

Nevertheless, England opened their tour of Australia in defeat despite their late efforts as the hosts earned a 30-28 win with 14 men.

Darcy Swain was given his marching orders in the opening half and the sides went in level at 6-6, with Ellis Genge getting the first score of the match but Australia moved into the ascendency.

The final quarter saw David Rennie’s team bag all three of their tries in the match through Jordan Pataia, Folau Fainga’a and Pete Samu and looked comfortable before Engalnd’s late rally in the closing few minutes.

Arundell, Premiership Rugby’s Land Rover Discovery of the Season, had a first season to remember with 11 tries in 17 appearances for Irish and England under-20s before his call-up to Jones’ squad alongside teammate Will Joseph.