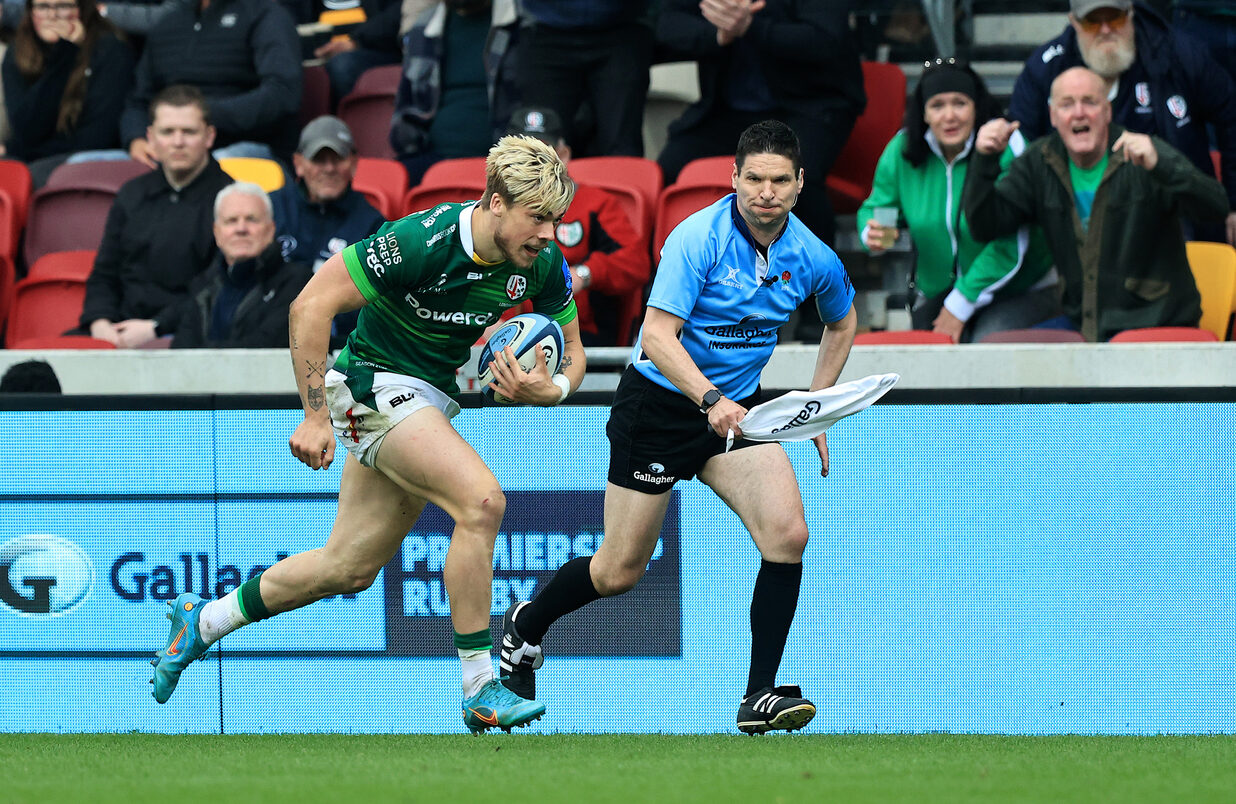 Ollie Hassell-Collins is eagerly awaiting that ‘opening day feeling’ when London Irish host Worcester Warriors in the first round of Gallagher Premiership action on 10th September.

The fixtures for the 2022/23 Gallagher Premiership and Premiership Rugby Cup season were announced this week, with the Exiles entering the new season as Heineken Champions Cup contestants for the first time in over a decade.

Declan Kidney’s men also achieved their first cup final appearance as a top tier side in two decades last year, now operating against the same sides in the cup pool stages as last term in Harlequins, Northampton Saints and Saracens.

The maiden fixture of the new campaign sees the Exiles host Steve Diamond’s side after a three-game series of engaging matches last season, with Irish’s Academy product wary of understating the importance of a home curtain-raiser.

“It’s massive for us to have a home game to open our season up, looking at the last few seasons we have always travelled away from home and we have never quite had that ‘opening to a season’ feel,” Hassell-Collins divulged, speaking at the 2022/23 Gallagher Premiership fixture launch at BT Tower.

“It will be great for the supporters as well, to be back home at Brentford is something we can’t wait to share with them.

“As a squad, we have missed that feeling of having them welcome us on to the pitch so hearing them on the season’s opening day will only stir us on further.”

Irish have been away from home in all three previous openers since their return to the first tier of English rugby in 2019, meaning it will be the first time the Brentford Community Stadium will host a first game of the season for the Exiles.

The two most recent of those three first games were indeed against Warriors, and again with the last home outing of the season against the Sixways side, the saga against the East Midlanders is set for another intriguing chapter in early September.

“I’m looking forward to the season, and I can’t wait to get involved again.

“Seeing the schedule now gives us something to work towards and see how we can plan our season, and gives those tough sessions on the pitch a bit more meaning.

“The opening game is a big one against Worcester, this will be the third time playing them in as many seasons in our first fixture.

“Our games against them last year were big battles, so myself and the boys are anticipating another tough test against them.”

The 23-year-old winger was named in Eddie Jones’ England training squads that preceded their tour to Australia after the season’s conclusion, and as such has only just returned to training at Hazelwood.

“I’ve loved being back at the Club, we have a host of new guys that have come in that have provided a lot of energy and drive to learn and improve.

“Being back in with the team has been great and there’s a great vibe around the place at the moment.

“Obviously the offseason is important, but seeing videos of the guys training has made me wish I was out there!

“We’re all itching to get back out there and pull on that jersey for another season.”

A signpost fixture earmarked for all associated with the Club is the first home London derby of the season- and it’s Saracens who are the first fellow capital side up at the Brentford Community Stadium.

The game is scheduled to take place in the days before Christmas this year (23rd/24th December) in Round 13 of the Gallagher Premiership, and Hassell-Collins for one is counting on another classic after Irish maintained a 100% home record against the Men in Black at the BCS last term.

He explained: “It promises to be immense- we had a good run against them last year, and being at home around the festive period will be a class feeling.

“Local derbies are always special for us as a Club, but since our move back into London I feel as though they have gone up another level on and off the pitch.

“There’s potential for us to sign off our year in style in our final home game, so it’s already built up to be a day to remember.”

Another date etched into diaries for many Irish in London is the St. Patrick’s Party, and it’s Northampton Saints who are back once more next March after becoming the first side to accompany Irish on the occasion in front of fans since a move to Brentford.

“The atmosphere last year was special, and probably the best I felt at an Irish game,” Hassell-Collins revealed.

“If we can get anything close to that again this year, it’ll be amazing.

“Of course, it was a disappointing result back in March but we went up against a team that eventually qualified for the play-offs.

“Hopefully we can give the supporters something more to cheer about next year.”

The one date all west Londoners will be waiting for is the weekend of the 27th/28th May, when Irish welcome Harlequins on the final day of the Gallagher Premiership.

The table permutations, the needle, the geography and the previous even split of results last season in the league mean this upcoming slate of games against the Famous Quarters are some of the most hotly anticipated in recent memory.

“It’s a bit of a mouth-watering prospect, it’s always exciting when you know you have Quins coming up in the gameweek.

“Having them at home for the last game of the season doesn’t come around too often, so I’m sure the fans will be just as excited for it as we are at Hazelwood.

“It could also be a crucial game in terms of each Club’s league standings come the end of the season too, so there’s not many other better ways to finish off a season hosting your rivals.”

You can book your place to see Ollie and the boys at the Brentford Community Stadium next year with a 2022/23 Season Ticket.