Gilsenan geared up for Wasps encounter on Sunday 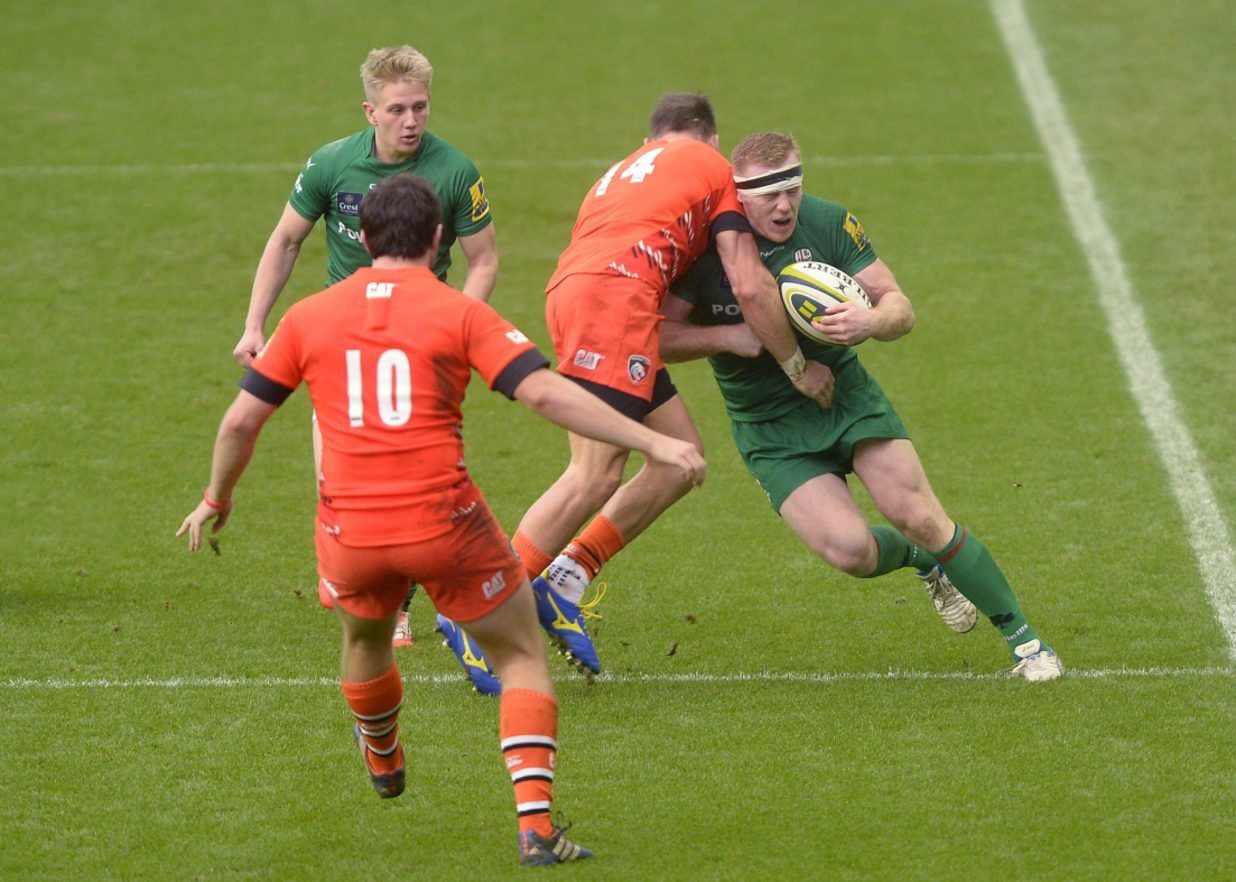 London Irish face Wasps in the LV= Cup on Sunday and one player hoping to get his name on the team sheet is Irish new man Conor Gilsenan.

With a burst of game time of late in the European, Premiership and now LV= Cup campaigns, including a Man of the Match performance last week against Leicester, Conor is settling into life as an Exile.

“I’ve been here about four or five months now”, the back rower said. “Obviously in the first month or two there was a lot of adjusting to do but I’m very comfortable in my surroundings now and really enjoying living in London.

This comfort can be seen in his appearance in LITV’s ‘Ask The New Boys 2’ (http://bit.ly/1tcvzS5) where Jebb Sinclair says the young Irishman is his favourite of the new signings.

“Jebb, Kieran (Low) and Mike (Mayhew) live near me so I spend a lot of time with them,” he laughed. “That probably explains the slight favouritism there!

“It is a good changing room to be in, serious when we need to be but a great buzz around the place and we have great banter with each other. It is a very competitive squad, with everyone vying for places, but it is all very healthy. There is never any bad blood after training and it’s all very positive.”

Conor has seen a lot of game time recently, featuring in all of the last three games, including a start in the European Challenge Cup versus Rovigo Delta.

“It makes it all the more enjoyable when your getting that game time, you feel yourself improving by playing against quality players and getting more feedback from coaches as your involved at the weekend and you are the one carrying the shirt.

“I wasn’t unhappy when I wasn’t involved, but your moral definitely lifts when you are. We are putting a big focus on it”, he said of the Clubs efforts in the European Challenge Cup.

“There was good preparation ahead of Rovigo, a bit of squad rotation which gave people like myself a look in and then shuffled it back around for the game in Grenoble.

“It is always tough to win in France no matter what team they put out and especially as no one had beaten Grenoble so far so it was great to get a win, it was a massive scalp for us.”

Following to impressive wins in the European Challenge  Cup, Irish welcomed Leicester Tigers to the Madejski for the first game of the LV= Cup last weekend.

Despite dominating both possession and territory Irish were unable to claim victory, losing out 16 – 17.

“It had felt like we were really building some momentum. Every pass went to hand against Rovigo and we played quite well in Grenoble and ground it out in the end.

“In the most part we had been very accurate and that just completely went missing last week so one of our real focuses this week ahead of Wasps is to try and return to what we were doing well against Grenoble and Rovigo and that is accuracy and being clinical.”

Despite the loss there was a little bit for Conor to be happy with, as he picked up the Man of the Match award.

“I had never got one before”, he laughed. “So it was nice to pick one up and have something to take back home.”

“Wasps are a top class outfit”, said Gilsenan turning his attention to this weekend’s clash. “They put in a really good shift against Leinster and took a few big scalps against some of the big teams early on in the season so they are going to be looking for top four and they have a big squad as well so the LV= Cup will be no different.”

After this weekend, it is the return of the Premiership with Irish facing a long trip North to play Sale at the AJ Bell, but Conor is 100% focused on the challenge this weekend.

“For me it about just trying to put in another good shift and try and impress and try and put my name in the coaches head. We have to just keep building momentum and build together as a squad.”

London Irish play Wasps away on Sunday 9 November, kicking of at 15:00. The next home game is on Saturday 22 November when Irish welcome Bath to the Madejski.